Heads of the three global trade agencies pledged to enhance their relationship across a range of activities including trade-related technical assistance, research and the sharing of information. 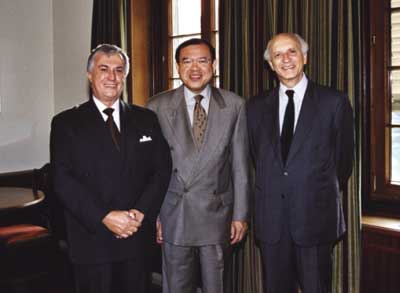 UNCTAD Secretary-General Rubens Ricupero and International Trade Centre Executive Director Denis Belisle offered their full support to WTO Director-General Supachai Panitchpakdi in his efforts to bring about a timely, balanced and productive outcome to the Doha Development Agenda round of trade negotiations. All three agreed that it was vital for WTO member governments to meet short term and intermediate deadlines in these negotiations if the talks were to conclude on schedule by 1 January 2005.

The three leaders agreed their agencies could make an important contribution to a successful conclusion of these talks through intensive cooperation in assisting developing countries to better participate in these negotiations through technical assistance, private sector awareness programmes and more extensive exchange of database information.

The three agreed that they would meet at head of agency level twice annually while their senior officials would hold meetings more regularly to ensure closer co-ordination of programmes at the three organizations.

Dr. Supachai stressed his commitment to greater coherence between the three organizations in these areas as well as in common research projects related to issues included in the Doha Agenda.

These are very difficult and uncertain times and the only way I see to move forward is to move forward together. I don't want this round of negotiations to be call the Doha Development Agenda for nothing. We will need real substance in these talks and I look forward to the important contributions of ITC and UNCTAD in making this a truly successful round which will bring benefits to all members, Dr. Supachai said.

Currently, a disagreement between WTO member governments over the status of international organizations in the Doha talks has prevented UNCTAD and ITC from observing the negotiating sessions of the relevant WTO bodies. Dr. Supachai told his counterparts he would continue to work towards finding a solution that would bring observer status to these two organizations and others.