> Overview of developments in the international trading environment

The global economy has encountered increasingly strong headwinds over the past few months that have set back world trade and output growth.  The outlook is worse than at the time of issuance of the previous trade monitoring report in June 2012 due, among other things, to budget developments and the persistent debt crises in some major economies.  Output and employment trends in many countries have continued to be negative, despite the many measures implemented to contain the slowdown in economic growth.  In the face of these developments, the WTO Secretariat has recently revised downward its forecast for world trade growth in 2012 to 2.5% down from its 3.7% forecast issued in April 2012.  The volume of trade growth in 2013 is now forecast to be at 4.5%, still below the long-term annual average of 5.4% for the last 20 years. 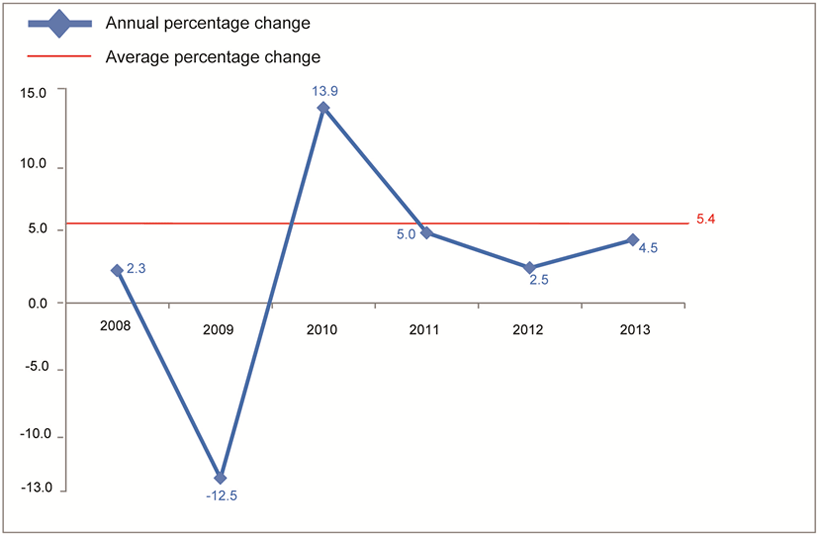 a   Figures for 2012 and 2013 are projections.
b   Average of exports and imports.
Source:  WTO Secretariat

The trade monitoring exercise and the individual Trade Policy Reviews undertaken in 2012 show that, on the whole, governments have continued to resist domestic pressures to erect trade barriers, although some of them have put in place trade-restrictive measures.  This Report follows a new format, as requested by members in discussions at the TPRB, and therefore it does not allow for a comparison of trends in trade restrictions with the previous monitoring reports.   Based on the previous methodology, it seems that there has been a slowdown in the imposition of new trade-restrictive measures over the review period (308 measures which cover around 1.3% of world merchandise imports) compared with last year (339 measures).  This time, 51% of the total number of recorded measures can be considered as facilitating trade (these measures cover around 3.2% of world merchandise imports).

The new restrictive measures continue to add to the stock of trade restrictions and distortions put in place since the outbreak of the global crisis, most of which remain in effect, and those that have existed for a long time.  All governments need to redouble their efforts to promptly address this situation and to advance trade opening as a way to counter slowing global economic growth.  As noted in previous monitoring reports, trade restrictions and inward-looking policies will only aggravate global problems and risk generating tit-for-tat reactions.  The difficulties and concerns generated by the persistence of the global economic crisis, with its many facets, are fuelling the political and economic pressures put on governments to raise trade barriers.  This is not the time to succumb to these pressures.

This Report shows that, during the review period, some countries have also adopted measures to facilitate trade.  Around three quarters of the 162 trade facilitating measures recorded represent either a decrease or elimination of import tariffs.  Some of these measures were taken on a temporary basis.  The second most important type of facilitating measure was the streamlining of customs procedures.  A number of measures were also aimed at facilitating exports.

During the review period, a total of 164 other trade and trade-related measures were recorded, out of which 132 were applied on imports.  The main measures were tariff increases and new customs procedures.  On exports, 32 measures were applied, comprising mainly restrictions or bans on some food products and raw materials.

Table 3: Other trade and trade-related measures

Regarding trade remedy trends, anti-dumping activity overall is on the rise, due to significant increases in new investigations initiated by several members.  It would seem that the declining trend in anti-dumping initiations, which started in 2009, could be reversed in 2012.  As far as countervail and safeguard initiations are concerned, there have not been significant changes in patterns.

Members are increasing their notifications of sanitary and phytosanitary (SPS) and technical barriers to trade (TBT) measures.  This may be a reflection of more active adoption of new measures in this area for a variety of reasons, but also more systematic efforts by members to follow the transparency requirements in the relevant Committees.  The discussion of specific trade concerns related to SPS and TBT measures, which seem to be increasing, provides members an opportunity to address their differences in a multilateral framework. 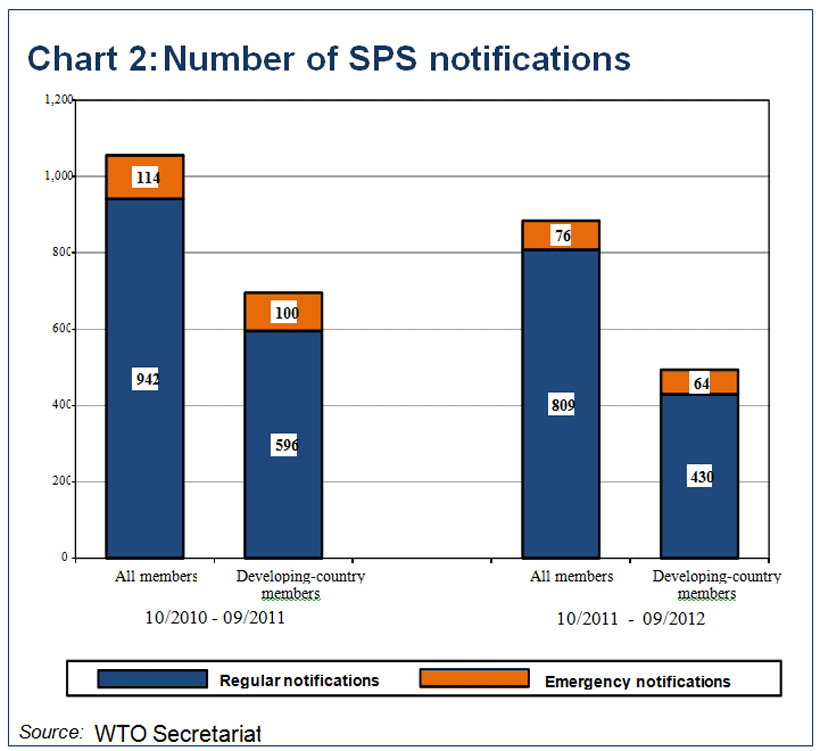 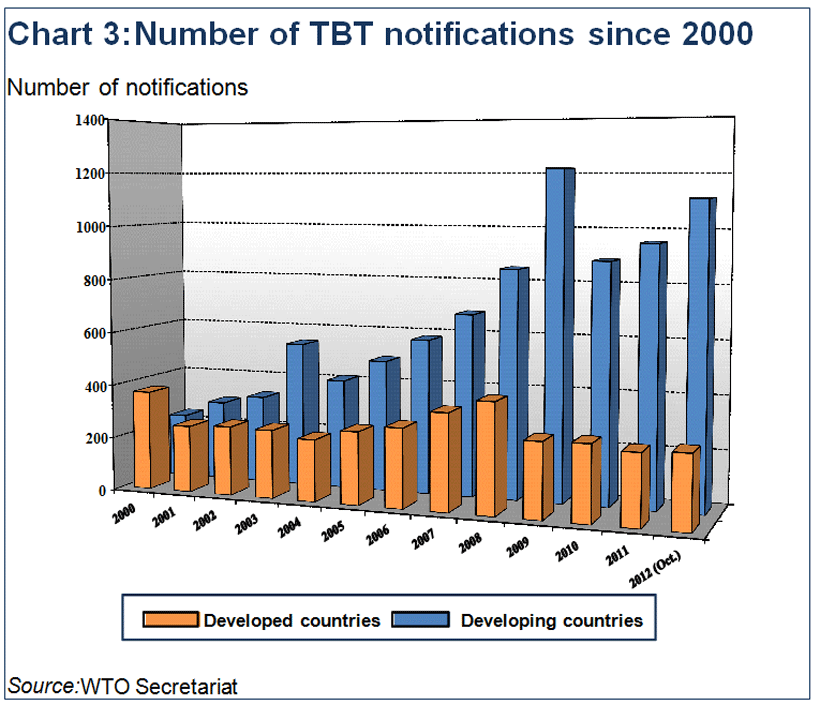 Developments concerning trade in services were reported for several members.  Most of the new measures can be considered as opening the services sector to foreign participation.

A few governments put in place new general economic support measures during the review period.  The regular monitoring of government-support measures continues to be a challenge because of difficulties in obtaining relevant information.  In an attempt to provide more background information, this Report includes considerations concerning notifications to the Committee on Subsidies and Countervailing Measures, and an illustration of general economic support measures extracted from the TPRs undertaken during this year.  An analysis of agricultural support on the basis of notifications to the Committee on Agriculture, as well as on data from the OECD, is also included.

The evaluation of agricultural support, as well as any comparison across different members or regions is difficult due to differences in methodologies used in notifications as well as delays in notifications from many members.  Based on available notifications, domestic support levels have been following an upward trend during the last decade.  However, the general trend appears to be that supports notified under the Green Box are increasing while, for developed countries, support under the other Boxes has been decreasing (triggered by higher international prices and, in some cases, domestic reforms).  For some developing countries, support under the Amber Box and Article 6.2 (i.e. some development programmes in developing countries) has been increasing.  In absolute terms, the levels of support still remain far higher in developed countries.   The OECD data (which are more up to date than the WTO notifications) confirm that structural reforms have been taking place in some developed countries as they move away from market price support towards, according to the OECD, less trade distorting trade support.  On the other hand, OECD and WTO data show that at least in the years up to 2010, the trend in market price support in some OECD countries and some developing countries has been increasing despite higher world prices.

Regional Trade Agreements (RTA) activity continues to be strong.  During the review period, members notified 22 agreements, bringing the total number of RTAs notified to the WTO which are in force to 231.  The Secretariat estimates that there are over 100 other agreements in force but not yet notified to the WTO.  Efforts continue to be made to encourage members to make timely notifications of their RTAs.

On 30 March 2012, the Parties to the WTO Agreement on Government Procurement (GPA) adopted the results of the renegotiation of the GPA conducted over more than a decade.  The agreed results comprise a significant expansion of their market access commitments, the coming-into-force of a previously negotiated revised text of the Agreement, and a set of Future Work Programmes.  Since a key element of the GPA is to ensure fair and transparent competition in the covered public-procurement markets, the revised rules will help to achieve maximum value for money in public expenditure in a time of severe budgetary constraints for many governments worldwide.

The most recent monitoring report on G-20 economies notes that trade frictions seem to be increasing at a time of continuous economic difficulties.  These tensions are reflected not only through trade remedy and dispute settlement cases under the WTO, but also through decisions affecting foreign investment and participation in infrastructure-related government procurement programmes.

The world needs a renewed and stronger commitment from all Governments to revitalize the multilateral trading system that can restore economic certainty at a time when it is badly needed.  The policy determination to resist inward-looking policies seems to be faltering in some countries, even as the world economy needs more trade to stave off recession.  Due to the rapidly changing patterns of world trade, restrictions on imports will inevitably be felt in reduced export competitiveness, with production chains becoming more and more global.  The last thing the world economy needs right now is indulgence in trade-restrictive practices.   In this context, even if it is clear that the goal of achieving a DDA package encompassing all 20 topics among the WTO's 157 members is out of reach in the short-term, the possibility still exists of advancing in smaller steps.  This possibility should not be lost.

This Report covers the period mid-October 2011 to mid-October 2012.  It is presented pursuant to Paragraph G of the Trade Policy Review Mechanism mandate and aims to assist the TPRB to undertake its annual overview of developments in the international trading environment that are having an impact on the multilateral trading system.  The Report is issued under the sole responsibility of the Director-General.  It has no legal effect on the rights and obligations of members, nor does it have any legal implications with respect to the conformity of any measure noted in the Report with any WTO Agreements or any provisions thereof.

The full report is available on the WTO website at www.wto.org.