> Panel on Defining the Future of Trade

Launch of the report — Opening remarks by DG Pascal Lamy

Good morning and welcome to all,

I am very pleased to have with us five members of the panel that I constituted  about one year ago to look at the factors defining the future of trade:  President Mogae,    Talal Abu-Ghazaleh, Pradeep Mehta,     Jurgen Thumann and Sharan Burrow.

They, together with the other seven panellists, have looked at three elements:

I want to publicly recognize their engagement and effort in putting together this report.

The greatest value of this report is precisely in the people who have contributed to it; it should not be dismissed without serious consideration since it reflects the experience and expertise of 12 tremendous professionals from different backgrounds, different continents and different expertise but who have in common their strong support for "cooperation over conflict" and for a "rules-based system over the law of the jungle".

The report does not offer quick fixes to conclude the Doha Round; it was not intended to do so. What is says about the Doha Round is that there is a political imperative as well as an economic rationale to conclude it. But many of the issues addressed in the report are of direct relevance to unlocking the Doha Round.

Now, let me briefly address the most salient points in this report before passing the floor to each panellist to give his/her own flavour of this exercise in collective collaboration.

The report has three parts:

Chapter 1 looks into how trade can work for growth, development, jobs and sustainable development. It may sound a bit obvious for many of you but the panel felt it was important to start with placing trade in the broader context of a set of other domestic policies that need to be in place for trade to work; "trade as a means, not as an end" says the report.

Chapter 2 looks into what are the shaping factors of trade for the future:

So what to do against this background?

Chapter 3 looks into a set of suggestions they freely offer to the WTO members; I am sure each panellist present here would want to put the emphasis on the elements that are dearer to them.

If I had to capture the essence of their suggestions in one word, that would be "convergence":

Let me again express my appreciation for their work and now give them the floor to present to you their own views on their report. 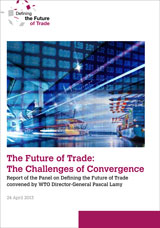