World trade is expected to expand slowly in 2013

The outlook for economic growth and job creation remains a major concern in most countries. The global economy has continued to struggle over the review period, with negative consequences for both global and G-20 trade flows. The most recent forecast for 2013 shows continuation of 2012 with both world trade and output to expand slowly and below historical trends and averages. World trade is forecast to grow by 3.3% in 2013. Although this is higher than the 2% growth in 2012, it is still below the 20-year average of around 5%. 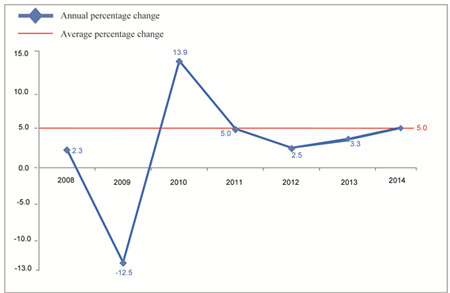 Note: Volume of merchandise trade is the average of exports and imports. Figures for 2013 and 2014 are projections.
Source:  WTO Secretariat.

a Figures for 2013 and 2014 are projections
b Average of exports and imports
c Includes the Commonwealth of Independent States (CIS)
Source: WTO Secretariat estimates

Some G-20 economies continue to put in place trade restrictions

More than 100 trade-restrictive measures were implemented by G-20 economies over the past seven months, covering around 0.5% of G-20 merchandise imports, equivalent to 0.4% of world merchandise imports. The most frequent measures taken during this period were the initiation of trade-remedy actions, in particular of anti-dumping investigations, followed by tariff increases.

It is important to highlight that in today's world of global value chains and fragmented production processes, exports depend more than ever on imports. Barriers to imports will thus inevitably be translated into higher costs for exporters.

Trade restrictions continue to accumulate, as the pace of removal remains slow

The new trade restrictions implemented over the past seven months come on top of the set of restrictions previously recorded by the monitoring exercise since the outbreak of the global crisis, the majority of which are still in place. The removal of previous trade restrictions remain slow. Out of the total number of trade-restrictive measures implemented since October 2008, around 19% have so far been eliminated. At the time of the last monitoring report in October 2012, 21% of the restrictive measures had been removed.

The trade coverage of all import restrictions adopted since October 2008, excluding those that have been terminated up to mid-May 2013, is estimated to be around 3.6% of world merchandise imports, and around 4.6% of trade of G-20 economies.

For the first time, the WTO Secretariat has calculated an estimate of the trade impact of import-restrictive measures taken since October 2008 and which are still in place. The cumulative trade impact of import restrictions implemented by G-20 economies on G-20 trade is estimated to have been around 0.2%. Although the actual trade impact of all restrictions may be higher, in particular in those specific sectors most heavily affected by measures, this low aggregate percentage provides an illustration that, on the whole, most countries have, so far, resisted resorting to widespread protectionism.

In a context of a fragile and uneven economic recovery and lower trade growth, it is all the more important that G-20 governments avoid making matters worse by adopting isolationist polices and measures that restrict trade which could engender dangerous reactions by their partners. Instead they should take positive steps to unlock the potential for trade to grow stronger by ensuring a successful outcome at the next Ministerial Conference in Bali. A deal on trade facilitation, coupled with an agreement on a range of agriculture and development issues, would send a signal that the WTO remains a relevant forum in shaping trade rules for the 21st century.

To overcome protectionist threats and to prevent a self-destructive lapse into economic nationalism, G-20 economies need to refocus their attention on reinforcing the multilateral trading system. Trade can once again be an engine of growth and a source of strength for the global economy rather than as a source of instability and tension. At this stage, the world economy needs all the help it can get, and trade is an important and viable option.

This is intended to be a purely factual report and is issued under the sole responsibility of the Director-General of the WTO.  The report has no legal effect on the rights and obligations of WTO members, nor does it have any legal implication with respect to the conformity of any measure noted in the report with any WTO Agreement or any provision thereof.  This report is without prejudice to members' negotiating positions in the Doha Round.

The full report is available on the WTO website at www.wto.org.