“Over the six months to May, G-20 members have continued to introduce trade restrictions — albeit at a slightly slower rate than before,” said WTO Director-General Roberto Azevêdo. “While some liberalising measures have also been introduced, it is clear that the coat of trade restrictions has grown a bit thicker over this period. This will not help our efforts to support growth and development around the world — and therefore we must remain watchful,” said DG Azevêdo. “One way to reverse this trend is to make progress on the WTO's post-Bali agenda, aiming at two things: full implementation of the Bali decisions and rapid conclusion of the Doha round negotiations. On these issues, as on so many others, the leadership of the G-20 will be essential.”

World trade growth in 2014 is expected to be higher than in 2013, but below the historical average

World trade and output have continued to grow inconsistently since the December 2013 G-20 trade report, with expansions in the fourth quarter of 2013 followed by setbacks in the first quarter of 2014. If the most recent GDP growth forecasts hold, the volume of world merchandise trade is expected to grow by 4.7% in 2014 and by 5.3 % in 2015, significantly larger than in 2013. The projection for 2014 is below the 5.3 % average of the last 20 years and the 6% average of the 20 years leading up to the financial crisis. Most of the risks to this trade outlook are on the downside (Table 1). 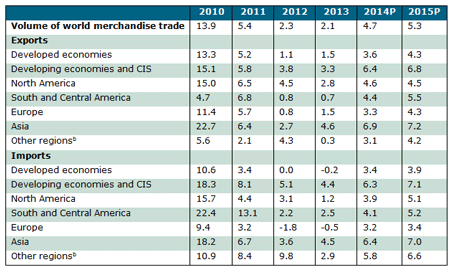 a Figures for 2014 and 2015 are projections.
b Other regions comprise the Africa, CIS and the Middle East.
Sources: WTO Secretariat.

G-20 members continue to introduce trade restrictions, but at a slightly slower rate

Encouragingly, the number of trade liberalizing or facilitating measures has increased

Lack of information persists in respect of certain types of measures

Although the information presented in this report covers a wide range of measures affecting trade in goods and services, the observations made in the December 2013 G-20 trade report on the lack of adequate data regarding certain types of measures remain valid. This is the case in particular with respect to subsidies and other support measures. As reflected in Annex 2 to this report, the information made available by G-20 members on such measures is very limited. How to ensure greater transparency with respect to subsidies and other types of behind-the-border measures is an important matter that requires further attention.

The multilateral trading system remains the best defence against protectionism and an important driver of economic growth, sustainable recovery and development. The successful outcome of the WTO's 9th Ministerial Conference has provided an important opportunity to strengthen and reinvigorate the multilateral trading system.  Implementation of the decisions reached in Bali and developing a work programme by the end of this year on the conclusion of the Doha Development Agenda are the next steps in strengthening the multilateral trading system.  This will deliver a boost to trade around the world and help to alleviate the concerns regarding obstacles to global trade flows. It will also help to deliver global growth, though protectionist pressures are bound to remain in a context of slow uneven recovery and persistent high levels of unemployment. G-20 members need to remain vigilant and show leadership in combatting such pressure.