The story so far

Since the last meeting in June, two papers on domestic support were submitted by Canada and Australia and by Norway.

The paper submitted by Australia and Canada highlights that some of the larger WTO members have a lot of “space” between the total trade-distorting domestic support allowed under the WTO Agreement on Agriculture and the actual amount of domestic support they are providing. This suggests, in their view, that a cut in the overall trade distorting support (OTDS) would “cut into water, not into blood”.

“OTDS has proved to be one of the most contentious issues,” said Ambassador John Adank, Chair of the agriculture negotiations. “This is because exemptions provided for some members in the draft modalities have been put into question by some other members, who argue in favour of comparable disciplines for all large subsidizers.”

The paper was welcomed by some members, but no convergence of views emerged during the meeting. Some large developing countries stressed that the statistics cited in the paper do not take into consideration the vast social economic differences among countries. Some members emphasized the development aspect of the Doha Round, and the importance of special treatment for developing countries. Several reiterated that the draft text reflecting the negotiations up to 2007-08, known as the fourth revision of the draft modalities for agriculture or “Rev 4”, should be the basis for the agriculture discussions.

Norway's paper suggests a simple structure for a possible outcome on domestic support. It puts forward cuts in the aggregate measurement of support (AMS) and non-product-specific de minimis (i.e. minimal amounts of domestic support that are allowed even though they distort trade) by developed countries and those developing countries with AMS, leaving the product-specific de minimis untouched. It also puts forward a cap on the “Blue Box”. According to Norway, only a handful of developing countries would be affected by the cuts in the proposal.

The paper was welcomed by some members as simple and doable but members pushing for deeper agricultural reform argued that the level of ambition is too low. Several members stressed the value of product-specific limits that were left out of the proposal.

The general view was that the outcome in domestic support would determine the level of ambition in the other areas of the agriculture negotiations — market access and export subsidies.

Switzerland introduced a proposal, co-sponsored by Israel, Japan, Korea, and Chinese Taipei, to improve the existing transparency requirements in the application of export prohibitions and restrictions. Some members welcomed the thrust of the proposal whereas some others expressed reservations and cautioned against "cherry picking" specific issues from the agriculture draft modalities text.

This was John Adank's last meeting as Chair of the agriculture negotiations. Members paid tribute to his hard work and skilful leadership. 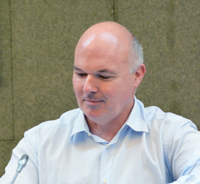 I would like to start by giving a short summary of my recent consultations and my understanding about where we stand and what seem to be the key issues in each pillar.

Since the last informal meeting of the Special Session on 16 June, I have continued consultations in various formats. While these have deepened the debate in some areas, overall there is regrettably little substantive progress to report.

In Domestic Support, discussions have continued to focus on different elements of the pillar and their appropriate mix in order to limit the use of trade-distorting support while enabling Members to pursue recognised policy goals. These elements are: AMS, de minimis, Blue Box, OTDS and product-specific limits.  Members have continued to express views on the relative value of each individual element as part of the reform programme that we are pursuing.

If I could first accentuate a positive: I have detected some willingness among some members to consider reforms in the area of blue box support. This support — like green box — is currently uncapped, and disciplining this support would therefore represent a degree of reform. Any further discussions in this area will of course require engagement particularly with the members who continue to use blue box support.

Turning to more fundamental issues, while Overall Trade Distorting Support (OTDS) has been seen by many as important in order to limit the use of trade-distorting domestic support effectively over the longer term, it has also proved to be one of the most contentious issues. This is because exemptions provided for some Members in the draft modalities have been put into question by some other Members, who argue in favour of comparable disciplines for all large subsidizers.  This, in turn, has made it challenging to get some members to engage on other elements such as AMS general and product specific reductions and reductions in de minimis.

Positions on these threshold issues have not apparently evolved and Members are still far from convergence. However, two non-papers have been submitted since our last meeting and circulated to all Members with the aim of taking these discussions forward: one submitted by Canada and Australia (Job/AG/40), focusing on the current policy space available to members and the other submitted by Norway (Job/AG/42) focusing on existing disciplines and reforms in this area. You will have an opportunity to react to these non-papers in a minute.

As I noted in the fax convening this meeting, while Members have engaged constructively in these discussions, they have also expressed a range of questions or concerns with respect to how other aspects of the market access pillar would relate to particular tariff reduction approaches. I think that deeper discussions are needed on such issues, which include such issues as minimum cuts, tariff escalation and tariff capping provisions, safeguards — and in particular the SSM — tropical products, TRQs, special and sensitive products, and specific provisions for special and differential treatment. It would be useful to get a better understanding of how members see such elements in the context of any alternative approaches to tariff reductions. While I am aware that in some smaller group discussions there have been a number of exchanges in these areas, it would be important that some of the perspectives and exchanges are shared more widely with the membership. More fundamentally, if members are to move into the area of alternative tariff approaches involving averaging, they will need to take clear decisions on whether these approaches are based around a cut to the average or an average cut, and what is the % reduction level of ambition sought for members in different categories or situations in respect of either of these approaches, whichever one might be pursued. These issues are under discussion in smaller group processes and in individual consultations that I've had, but it's fair to say we are still a long way from getting clear answers here. The fundamental difference relates to the differences of views between key participants on their respective contributions to any outcome and what they stand to get in return.

Export competition remains essential as part of a wider package. As already indicated to you, overall this pillar can be considered to be more mature than the two others but in the course of recent consultations issues have been raised, particularly in respect of the areas of export credits and, in the field of international food aid, the question of in-kind food aid monetization.  As indicated in my convening fax, I would encourage delegations who have concerns in these or other areas, but have not presented any written contribution so far, to elaborate in more detail on the scope and nature of the issues at stake, and, to the extent possible, make suggestions on how, according to them, such concerns could be addressed.

Among other issues, not considered within the 3-pillar architecture, some Members have renewed their call to strengthen disciplines in the area of agricultural export prohibitions and restrictions and a specific proposal (in Job/AG/41 dated 19 June 2015) to this effect has been submitted by a group of Members and circulated to the full Membership.

In regards to cotton, and pursuant to the Bali Ministerial Decision, I held the third dedicated discussion on cotton on 9th July, back to back with the 23rd round of consultations under the Director-General's consultative framework mechanism on cotton.

The revised Secretariat background paper (TN/AG/GEN/34/Rev.2) circulated in advance of the meeting was welcomed as a useful basis for the discussions and ICAC made a presentation on global cotton market trends.

The dedicated discussion was again an excellent opportunity for Members to exchange views on trade-related policies and relevant developments for cotton, with several Members updating participants on developments of their cotton sector and recently.

On the negotiations front, cotton clearly remains a priority issue, as the Director General noted on 8 July, and there is no doubt that cotton will be part of any outcome coming out of the 10th Ministerial Conference in Nairobi.

As I told Members during the dedicated discussion on 9 July, my assessment is that with only five months left before the Nairobi Ministerial Conference, we need to engage in a much more focused negotiation on what could constitute a possible outcome on cotton. I invite you to contribute in this spirit today.

Finally, though the issue of Public Stockholding for Food Security Purposes is on a separate track, I use this opportunity to report on my consultations on this issue with a group of Members. On the positive side, those present manifested more willingness to engage and there was more apparent acceptance to take account of elements of the Bali decision in devising a potential permanent solution, though most of the views expressed were well-known ones. However, despite the signs of willingness to engage, it still remained unclear how far Members would be ready to go. These consultations will need to be continued and deepened in preparation for a further Dedicated Session.