> African Perspectives on Trade and the WTO

“African Perspectives on Trade and the WTO: Domestic Reforms, Structural Transformation and Global Economic Integration” brings together contributions from African policy-makers and representatives of partner institutions to assess how the multilateral trading system could assist Africa in overcoming some of its greatest challenges in areas such as governance, economic diversification and integration into global value chains.

In his opening remarks, WTO Director-General Roberto Azevêdo said: “The WTO’s African members have been increasingly central in the debates here over recent years. All members are working now to plot the way forward after Nairobi, and it is clear to me that Africa’s voice will be more important than ever in that conversation. The WTO can help to deliver a more inclusive trading system — and that’s why I think this book is so welcome. It is a reminder of the importance of the multilateral system for growth and development in Africa. And it is a reminder that African members must continue to play a leading role in forging the way forward.” Read the DG’s full speech here.

Minister Setipa said: “We need to ensure that the multilateral trading system is supportive and aligned with our regional priorities as Africans. The cost of moving a container to an African neighbouring country is higher than moving it to New York. Unless we make efforts to bring trade costs down, our trade competitiveness will be undermined. Now that we have ratified the Trade Facilitation Agreement — we need to exploit its potential gains. For Africa, the WTO is the best platform to contribute and get issues on the agenda and the only place where we can deal with structural challenges like agricultural subsidies.”

Minister Addy said: “This book provides some useful insights into where Africa is going, and I hope we can leverage some of the inputs such as foreign direct investment and trade facilitation. In the last decade, as we were reintegrating Liberia into the global economy, we considered WTO membership as an opportunity to announce to the international community that Liberia is ready for business. The role of the private sector will be crucial in leveraging the necessary investment.”

Minister Enelamah said: “This book captures the importance for stakeholders to exchange their experiences. Trade is central, and must be underpinned by proper investment and industry policies. This is why Nigeria has launched a new industrialization plan to create an enabling environment to help businesses to thrive. As part of this, President Buhari is committed to his priorities of good governance, economic welfare, security and the fight against corruption. WTO members need to be good trade neighbours to invite each other to build a strong multilateral trading system. I believe that Africa will emerge. With our critical mass, I am convinced that as Africans, we can actively participate in the global trading system. We reaffirm our strong support for DG Azevêdo.”

The book opens with a message from Kenya’s President, Uhuru Kenyatta, and a joint foreword by DG Azevêdo, the Cabinet Secretary for Foreign Affairs and International Trade Amina Mohamed and China’s Commerce Minister Gao Hucheng.

The publication includes contributions by:

The contributors to the book provide insights into how African governments could foster sustainable and inclusive economic growth and eradicate poverty by undertaking reforms to address market turbulence, increase intra-African trade, widen participation in global value chains and diversify exports.

The book is based on contributions to the Fourth China Round Table held just before the WTO’s Tenth Ministerial Conference in Nairobi, Kenya in December 2015. The China Round Table is part of the China Programme, which aims to help least-developed countries (LDCs) integrate more effectively into the global economy by strengthening their participation in WTO activities and by helping those not yet members to join the WTO.

The book can be purchased from the WTO’s Online Bookshop. 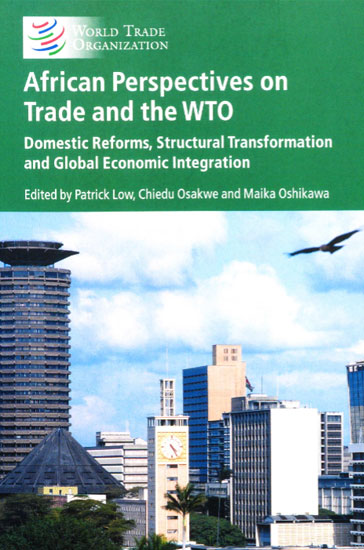