Speaking at a public event to present the Appellate Body’s 2016 Annual Report, the chairman, Ujal Singh Bhatia, noted this was the first time that the Appellate Body had organized such an event for its flagship report and that it would continue to do so in the future.

“The purpose for doing so is easily stated: the Appellate Body would like to go beyond the text of its reports to provide meaningful insights to all stakeholders about how it works – its experiences, its constraints, its concerns, and its many satisfactions,” Mr Bhatia said. “We believe you have a right to know how we do our job, as well as what more we need to do, in order to do it better.”

The chairman said the Appellate Body is now recognized as a “mature and well-respected international tribunal” which has dealt with a diversity of trade-related issues ranging from environmental protection and renewable energy subsidies to animal welfare and food safety.  “Its 146 adopted reports, along with more than 300 panel reports, constitute tens of thousands of pages of jurisprudence which is as wide in its reach as it is deep in its probing of the meaning of the covered agreements,” he said.

However, the increasing number of cases brought for appeal means the Appellate Body is facing difficulty in meeting the requirement of “prompt” resolution of disputes, a major feature that distinguished the WTO dispute settlement system from other international adjudicative systems. In recent years, the WTO dispute settlement system “has substantially ceded ground on this distinction,” the chairman admitted.

Additionally, an expected increase in the number of appeals in large and complex disputes will further exacerbate the problem of delays, Mr Bhatia said. Thus, a “significant portion of the Appellate Body’s resources will be unavailable for other appeals for considerable periods of time.”

When delays in WTO dispute resolution become the norm, “they cast doubt on the value of the WTO’s rules-oriented system itself,” Mr Bhatia said.  “Delays compel WTO Members to look for other solutions, potentially elsewhere. And in this, it is the weaker countries that stand to lose the most.”

“But like any other man-made system, the WTO’s dispute settlement system should not be taken for granted. It requires nurturing through timely interventions when problem areas emerge. The issue of delays is one such problem area which calls for broad, systemic solutions. It should be possible to find such solutions through determined action by WTO Members.”

The full text of the chairman’s speech is available here. 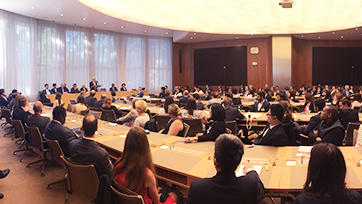