The report shows that digital technologies are likely to further reduce trade costs and boost trade significantly, especially in services and for developing countries. Global trade is projected to grow by an additional 2 percentage points annually between 2016 and 2030 as a result of digitalization, falling trade costs and the increased use of services. This corresponds with a 31-34 percentage point higher trade growth over 15 years.

The share of services in global trade is projected to grow from 21 per cent in 2016 to 25 per cent in 2030. The report also finds that the reduction in trade costs could be especially beneficial for micro, small and medium sized enterprises (MSMEs) and firms from developing countries, provided they have the ability to keep up with the adoption of digital technologies. In the best scenario, developing and least-developed economies' share in global trade is predicted to grow to 57 per cent by 2030, from 46 per cent in 2015, whereas if they cannot keep up, this share is predicted to rise to 51 per cent.

The report discusses how digital technologies can unlock savings, such as through better route planning, autonomous driving and smart inventories made possible by artificial intelligence and robotics. Blockchain solutions — a system of decentralized, digital transactions — can reduce time spent on customs compliance and logistics. The Internet of Things, the networking and processing capabilities of everyday objects, can help to improve operational efficiency through better preventative maintenance of machinery and products. These technologies can therefore reduce transportation and storage costs, which represent a major share of overall trade costs.

Digital technologies can also significantly affect what the world trades. For example, remote controlled robotics have led to revolutionary advances in trade in services and the emergence of new services such as telesurgery. Enhanced technological capacities which allow faster and simpler processing of traded products could also foster trade in time-sensitive, certification-intensive and contract-intensive goods.

The report argues that new technologies are likely to change the established ways the world trades, with comparative advantages predicted to change across economies. AI, 3D printing and advanced robotics could reduce the role of labour as a source of comparative advantage, while factors such as the quality of digital infrastructure and market size as well as institutional and regulatory determinants of comparative advantage, including intellectual property protection, might become more relevant. 3D printing, furthermore, may to some extent reduce the need for outsourced assembly, the number of production steps and other factors related to global value chains.

The report identifies certain areas which may warrant international cooperation. These include key initiatives being undertaken by multilateral organizations such as facilitating a favourable legal and regulatory framework, competition-related issues, intellectual property rules, supporting MSMEs, promoting digital inclusion, and addressing challenges related to trade facilitation and infrastructure for information communication technology. The report concludes that, overall, the expansion of digital trade holds the potential to generate considerable benefits if it takes place under conditions that adequately address important public policy challenges. Issues concerning inclusiveness, privacy protection and cybersecurity are likely to figure prominently in debates on the future governance of digital trade.

The report can be downloaded from the WTO website and printed copies are available through the WTO Online Bookshop.

The report also features for the first time opinion pieces from external contributors who provide their own perspectives on the future of world trade.

Launch of the World Trade Report

At the launch of the World Trade Report, panellists debated what the future of trade would look like in the face of upheavals brought on by digital technologies. Some panellists questioned whether services would indeed take up a larger share of trade and whether developing and least developed countries (LDCs)  would truly benefit from the projected trade growth. All panellists nevertheless agreed that digital technologies pose challenges to global trade regulation and that governments must work hard for coordinated solutions.

“Trade and technology are closely interlinked — and they always have been. From the invention of the wheel, to the railways, to the advent of containerization, technology has shaped the way we trade.  Today this phenomenon is accelerating as never before. We are living through an era of unprecedented technological change. Some call it the 4th Industrial Revolution; others the New Industrial Revolution or even the New Digital Revolution. But the common theme is clear — this is a revolution. These technologies are reshaping the economy before our eyes,” WTO Director-General Roberto Azevêdo said at the launch.

“These technologies are becoming ubiquitous. Increasingly they are shaping every element of the economy and every element of our lives. We can't simply leave our future to chance, or simply trust it only to market forces. We have a duty to make this technological revolution work for everyone. So we can't shy away from this debate,” DG Azevêdo said. His remarks in full are available here.

WTO Chief Economist Robert Koopman provided a summary of the Report. He encouraged WTO members to take a close look at the section on how to prepare for the technology-induced reshaping of trade and reflect on how they would want to take related discussions in the WTO forward. The rapid development of digital technologies that are making use of the internet is expected to transform the world economy more deeply than other technologies have before, Mr Koopman said.

Caroline Freund, World Bank Director for Macroeconomics, Trade and Investment Climate, said she was optimistic of strong trade growth in the future given that the world had already seen hyperglobalization in the mid-1990s and early 2000s alongside the rise of the internet and mobile computing. However, history has also shown other things to be “remarkably consistent”, she said, citing the stagnant share of services in global trade, the continued importance of geographical distance in determining trade patterns, and the lagging share LDCs have of world trade. More data, particularly on services, would be helpful in charting the future of trade, she said. Governments, she added, would do well to look at new areas of trade such as e-commerce, investment and MSMEs instead of the traditional “smokestack” industries of the past.

Susan Lund, McKinsey Global Institute Partner, stated a similar view that technology could have an “ambiguous impact”, specifically in terms of developing countries' participation in world trade. Digital technologies such as robotics could replace manufacturing workers and allow businesses to keep their factories closer to the end-consumer. Business process outsourcing located in developing countries, such as back office operations like call centres and data entry, could be taken over by automation and artificial intelligence.

Abdoullah Cisse of Carapaces Stratégies & Conformités highlighted the situation in Africa where a large number of people are still not connected to the internet. For him, it is important that digital technologies are used to bridge development gaps among economies instead of widening the divide. Mr Cisse also drew attention to issues of data ownership and environmental impacts that stem from new digital technologies, which the other panellists likewise raised.

“The future is hard to predict. There's optimism generally on the panel and in our report but there are different emphases on where the optimism will make its way into economic activities,” Mr Koopman said in closing the discussion. “There is a challenge for our governments to come together and have a serious discussion on this fundamentally important economic phenomenon that's going to change how we live.” 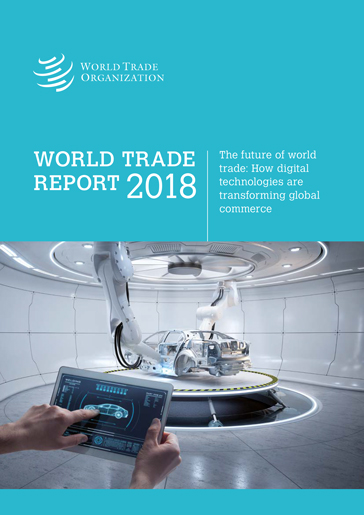 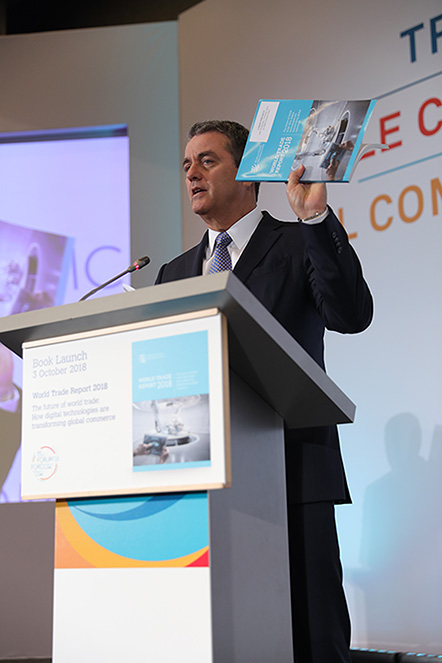