In opening the conference, WTO Deputy Director-General Alan Wolff told the attendees that the conference represented a unique high-level platform for development cooperation partners to discuss their prospective engagement for the sustainable development of the cotton sector, particularly in Africa and in LDCs.

“This conference and your presence today highlight that cotton development assistance is a non-contentious area of WTO work, characterized by a widespread pragmatic and cooperative spirit,” DDG Wolff noted.

Senior officials from the “Cotton 4” (C4) — Benin, Burkina Faso, Chad and Mali — as well as ambassadors and officials from Mozambique, Tanzania, Uganda, Zambia, Togo and Malawi spoke first at the conference, followed by ambassadors and officials from Brazil, China, the European Union and India, as well as the Agence Française de Développement (AFD). Also in attendance were representatives from the Enhanced Integrated Framework (EIF), the United Nations Conference on Trade and Development (UNCTAD), the International Trade Centre (ITC), and the United Nations Industrial Development Organization (UNIDO).

“The challenge we face here today relates to how to calibrate development assistance projects in a way that concretely and effectively helps farmers to take advantage of the various untapped potentials linked to their cotton production,” DDG Wolff highlighted.

Cotton production in Africa provides income to over 3.5 million farmers and their families, of which 17 per cent are led by women-farmers, DDG Wolff noted.  However, in spite of the importance of the sector, one of the key issues in Africa remains local processing and value addition. Of the 1,272 million metric tonnes of lint produced in French-speaking Africa in 2018, only 19,000 tonnes, or 1.5 per cent, was processed locally.

DDG Wolff said a good example is provided by cotton by-products, where, according to estimates from the International Cotton Advisory Committee (ICAC), Africa produces about 2.5 million tonnes of cottonseed, or 5.8 per cent of global production. Only 75 per cent of the seed is crushed for oil and seed-meal, meaning that 25 per cent of cottonseed produced in Africa goes unused. The estimated value of that unused seed is about US$ 237 million, he added.

Speaking on behalf of the C4, Shadiya Alimatou Assounan, Benin's Minister of Industry and Trade, said cotton was a principle export for Benin and other LDC producers.  For Benin, where cotton accounts for 12% of the country's GDP and more than half of its exports, the sector plays an important social and economic role in generating employment and fighting poverty.

She urged donors to provide support for the “Route du Cotton” project outlined by the C4 last year and to the new initiative on cotton by-products, promoted by the WTO, UNCTAD and ITC,  to improve the productivity and resilience of the cotton, textile and clothing sectors sector in the C4 and help diversify their markets both nationally and regionally.

India's WTO Ambassador Deepak Jagdish Saksena announced at the conference that India will launch a second phase of the Cotton Technical Assistance Programme based on the success of the first phase. In the second phase, the programme will be scaled up to cover five additional African countries over a five-year period and will focus on increasing cotton production and improving the post-harvest and plant by-products industry in the participating countries, as well as building the capacity of the cotton-based textile sector, the Indian ambassador added.

Gong Xifeng, counsellor with China's mission to the WTO, said the assistance provided to African cotton producers by China over the past two years has achieved substantial results, referring to the launch of the China Africa Modernisation Plan.

“If we look to the future there is great potential for cotton cooperation and initiatives,” Mr Gong said, adding that China remains ready to support the cotton by-products and other initiatives with African partners.

Demétrio Carvalho, Vice-President of the Brazilian Cooperation Agency (ABC), said that Brazil has dedicated $80 million to strengthening cooperation with cotton producers in Africa, the Caribbean and Latin America.  A specific example of such assistance was training on cotton production and the use of a specific Brazilian strain of cotton which, in the case of Benin, has helped it become the leading cotton producer in Africa.

Mr Carvalho stressed the importance of open markets to bolster the support initiatives.  “They are only relevant if the cotton produced can enter world markets,” he said. He also underlined that Brazil stands ready to support the new project on cotton by-products development in African LDCs.

Leonard Mizzi of the European Commission's Directorate-General for International Cooperation and Development said what conference participants clearly heard was a “show of force” for helping cotton producers in Africa and LDCs and a need to look closely at the development of value chains.  While assistance should focus on all aspects of the production chain, efforts should be concentrated on tracking how our progress is impacting the weakest link, which is the small farm holders.

Mr Mizzi argued that assistance needs to be structured in line with a more holistic strategy, with the objective of decent job creation at its core. He said the EU would continue to push for improved labour conditions and better conditions for women as well as focusing on climate adaptation and mitigation efforts as part of its assistance strategy. He noted the strong demand for assistance in developing parallel value chains from cotton by-products, and said that the EU stands ready to follow up on these calls.

Representatives from UNCTAD and the ITC informed the conference about activities they are proposing to support African farmers' efforts towards exploiting the full potential of cotton by-products.

Yanchun Zhang, Chief of the Commodities Branch at UNCTAD’s Division on International Trade and Commodities, said UNCTAD and ITC are ready to implement the next phase of a project financed by the Enhanced Integrated Framework on developing cotton by-products in eight African LDCs. During the conference, Togo and Malawi formulated formal requests to join this project, bringing the total number of beneficiary countries to ten.

This next phase will focus in particular on improving the capacity of stakeholders to develop commercialization plans for selected investments in value-added cotton by-products, improving the capacity of cotton farmers, including women farmers, to form strong cooperatives, help edible oil producers to invest in modern production techniques and improve the capacity of policymakers to formulate policies to support commercial investments in value-added processing of cotton by-products, Ms Zhang said.

Christian Fusillier, head of Agriculture, Rural Development and Biodiversity at AFD, said his agency had provided around €1 billion in support to cotton producers in West and Central Africa over the past 50 years through loans and subsidies that have helped modernize production and provide advice and support to farmers.  Current projects focus on capacity building for farmers and increasing resilience to climate change by adopting environmentally friendly practices.

Mr Fusillier announced that AFD has allocated €18.5 million through the AGRECO project for helping transition production systems and improving the incomes of cotton producers in southern Mali.

Simon Hess of the EIF secretariat highlighted the engagement of the EIF in supporting project development and feasibility assessments on cotton by-products in requesting LDCs, and noted the importance of leveraging further resources in support of the implementation phase.

Riccardo Savigliano, Chief of the Agro-Industries Technology Division at the UN Industrial Development Organization (UNIDO), said that future initiatives include the development of sustainable cotton production in Burkina Faso, and support for a sustainable and transparent Egyptian “white gold” cotton.

The inaugural “World Cotton Day” was launched by the WTO Secretariat at the initiative of the Cotton-4 and in collaboration with the Secretariats of the United Nations Food and Agriculture Organization (FAO), UNCTAD, the ITC and the International Cotton Advisory Committee (ICAC).

The event stems from the Cotton-4's official application for the recognition of 7 October as World Cotton Day by the United Nations General Assembly, reflecting the importance of cotton as a global commodity. 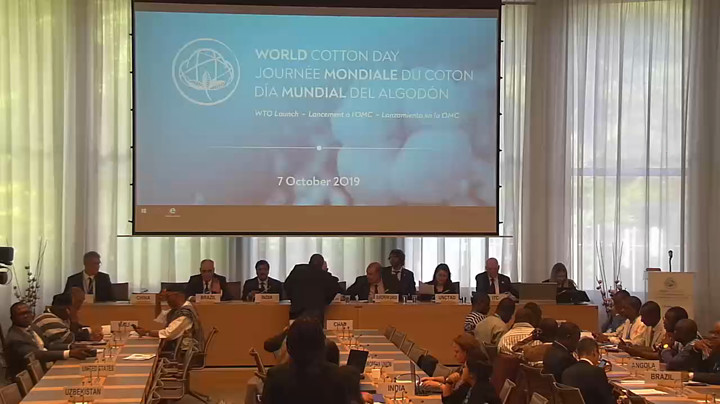