The John H. Jackson Moot Court Competition is a simulated hearing under the rules of the WTO dispute settlement system involving exchanges of written submissions and adversarial hearings before panelists on international trade law issues. The competition used to be known as the ELSA Moot Court Competition in WTO Law and was renamed in 2018 after John H. Jackson, an eminent scholar and a mastermind of the multilateral trading system.

As part of the competition, the teams prepare and analyse a fictitious case and present their arguments both as a complainant and a respondent in front of a panel that consists of trade law experts. This year the case, authored by Maria Anna Corvaglia from the University of Birmingham and Rodrigo Polanco from the World Trade Institute at the University of Bern, concerned sustainable energy production and raised issues relating to government procurement, rules of origin and prohibited subsidies.

A total of 90 teams of students from around the world participated in regional rounds held between February and April 2019 in Nairobi (Kenya), Vienna (Austria), Prague (Czech Republic), Singapore, and Washington DC (United States). The top 22 teams from regional rounds qualified for the final round, hosted by the Graduate Institute of International and Development Studies and the WTO in Geneva.

The team from the Strathmore University School of Law emerged as winners, making history as the first African team to win this prestigious competition. Harvard Law School faced Strathmore in the Grand Final and became the runner-up.

This year marked the sixth edition of the African Regional Round, with the inaugural round organized in 2014 by the University of the Witwatersrand (South Africa). It was made possible due to the generous support of the United Nations Economic Commission for Africa (UNECA) as well as various private and institutional donors. Twenty teams from Ethiopia, Kenya, Lesotho, Nigeria, South Africa, Tanzania, Tunisia, Uganda and Zimbabwe participated at this year's African Round, which was hosted by Kenya School of Law. The same team from Strathmore Law School won the round.

The WTO has been a technical sponsor and partner in the competition since its inception in 2002-2003. The Jackson Moot Court Competition is an example of the WTO's broad support for capacity building. The WTO sends legal experts to the regional rounds to act as panelists. WTO staff members also advise ELSA on the academic aspects of running the competition and are integral to planning the final oral round in Geneva. 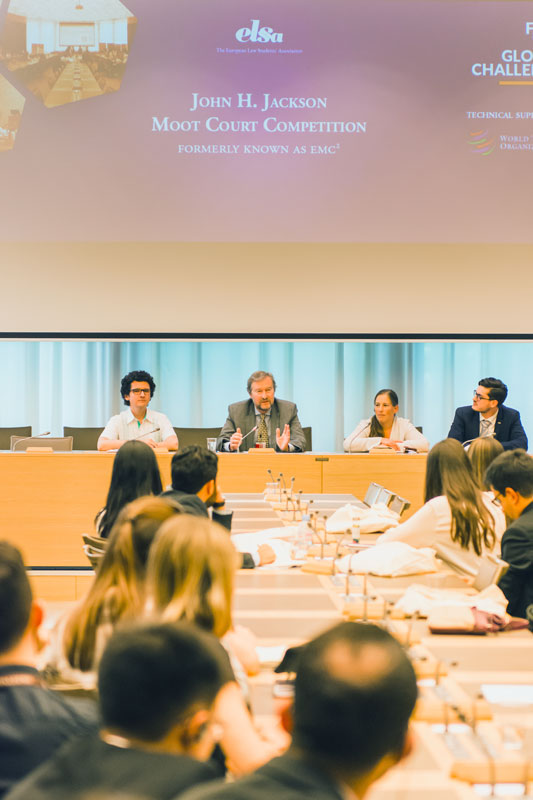