Released on 19 August, the current barometer reading of 84.5 is 15.5 points below the baseline value of 100 for the index and 18.6 points down from the same period last year. This reading — the lowest on record in data going back to 2007, and on par with the nadir of the 2008-09 financial crisis — is broadly consistent with WTO statistics issued in June, which estimated an 18.5% decline in merchandise trade in the second quarter of 2020 as compared to the same period last year. The exact extent of the fall in trade will only be confirmed later this year when official trade volume data for the period from April to June becomes available.

All of the barometer's component indices remain well below trend, with many registering historic lows, although some have begun to stabilize. Indices for automotive products (71.8) and air freight (76.5) are by far the worst on record since 2007. Container shipping (86.9) also remains deeply depressed.(1) Export orders (88.4) show signs of recovery as this index has turned upward. Meanwhile, indices for electronic components (92.8) and agricultural raw materials (92.5) have held up relatively well, showing only modest declines.

The WTO's June statistics implied a 14% drop in global merchandise trade volume between the first and second quarters of this year. This estimate, together with the new Goods Trade Barometer reading, suggest that world trade in 2020 is evolving in line with the less pessimistic of the two scenarios outlined in the WTO's April forecast, which projected that the volume of merchandise trade this year would contract by 13% compared to 2019. However, as WTO economists warned in June, the heavy economic toll of the COVID-19 pandemic suggests that the projections for a strong, V-shaped trade rebound in 2021 may prove overly optimistic. As uncertainty remains elevated, in terms of economic and trade policy as well as how the medical crisis will evolve, an L-shaped recovery is a real prospect. This would leave global trade well below its pre-pandemic trajectory.

The Goods Trade Barometer is designed to gauge momentum and identify turning points in world trade growth. Readings of 100 indicate growth in line with medium-term trends; readings greater than 100 suggest above-trend growth, while those below 100 indicate below-trend growth.

In normal times, the Goods Trade Barometer anticipates changes in the trajectory of world trade by a few months. However, the sudden, unexpected nature of the COVID-19 crisis may have profoundly altered economic behaviour and patterns, reducing the predictive value of the standard set of indicators. In this fast-changing environment, high-frequency (i.e. daily or weekly) statistics, made possible by advances in data processing and collection, may provide analysts with early signals of recovery in economic activity and trade. Other statistics may capture shifts in consumer and business sentiment. Modest increases have already been recorded for several of these indicators related to trade, such as those tracking commercial flights and port calls by container ships. The same is true for indicators such as copper futures as well as a measure of sentiment in news reports about economic expectations (see below).

The WTO will continue to monitor trade developments during the crisis, including unconventional and high-frequency economic indicators.

Further details on the methodology are contained in the technical note here.

Chart 1 shows the number of commercial flights per day recorded by the OpenSky Network since the start of 2020.  Flights worldwide fell nearly 80% between late February and mid-April, with international flights declining more than domestic ones. Flight totals have gradually recovered through the end of July but remain around 40% below their level at the start of the year. Commercial flights are an important indicator of the state of the global economy since they are closely related to both goods and services trade. 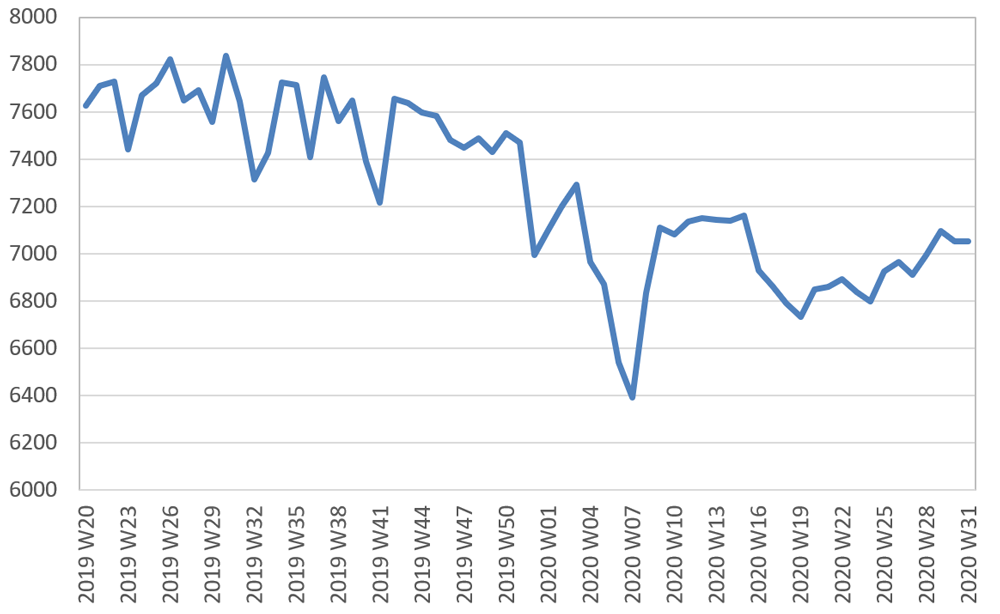 Source: United Nations Global Working Group on Big Data for Official Statistics.
Note: The first week of 2020 is estimated due to incomplete information.

Chart 2 shows weekly port calls of container ships recorded by the Automatic Identification System (AIS) developed by the International Maritime Organization (IMO) of the United Nations. Port calls dipped sharply in February 2020 when the severity of the COVID-19 virus became apparent, then rebounded before falling again in April-May as the disease spread more widely. Port calls of container ships were still down around 7% year-on-year at the beginning of August, marking a modest improvement over the 11% decline registered in May. 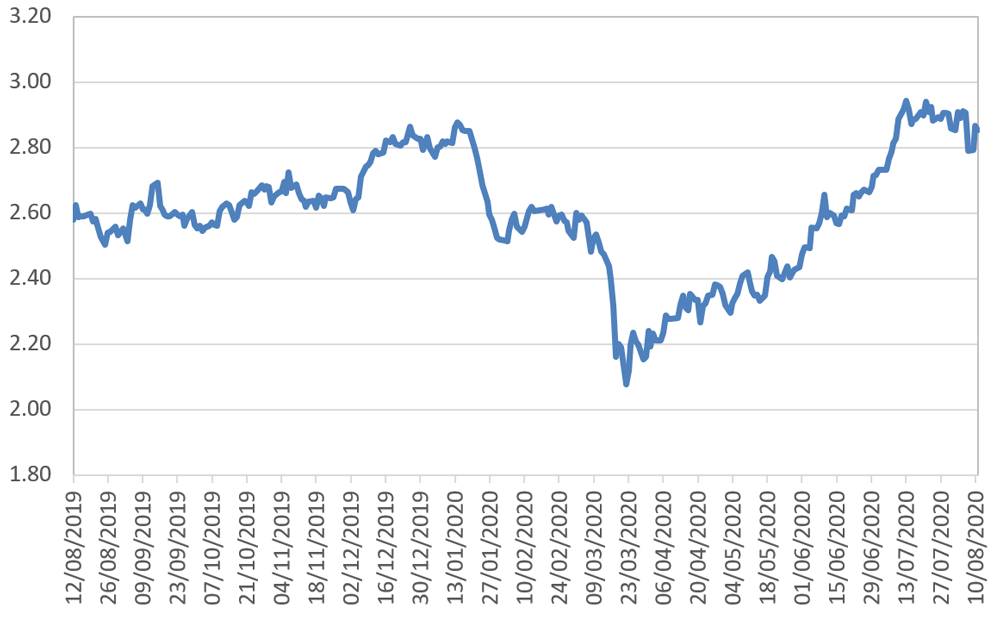 Prices of futures contracts for copper are a widely recognized leading indicator of economic activity due to the importance of this metal in many areas of manufacturing. Standardized contracts are traded on the COMEX exchange, a division of the Chicago Mercantile Exchange (CME). Copper futures were down 27% in mid-March compared to the start of the year but have since risen 37%, reflecting rising expectations of economic recovery. Whether these expectations are well founded will depend on the course of the COVID-19 pandemic, including second waves of infection and improved treatment options. 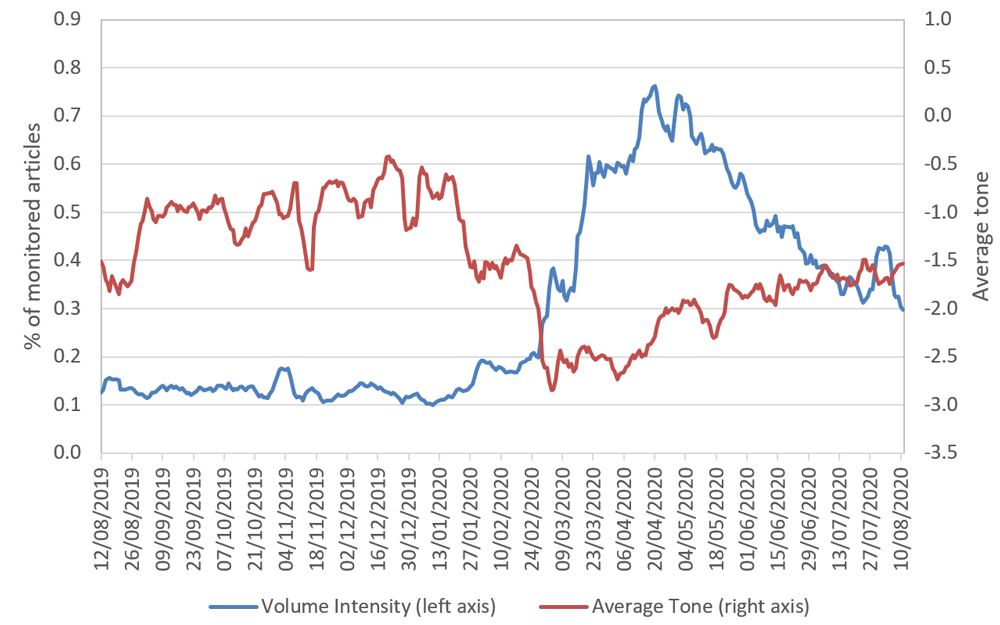 Chart 4 shows the daily volume and average tone of news reports containing the phrase “economic activity”, as monitored by the GDELT Project. Press reporting had already turned negative before the pandemic, bottoming out in March as the threat to the global economy became evident and the interest in the economic impact subsequently increased. Changes in reporting tone since then suggest that views on the global economy are gradually improving, although remaining predominantly negative, with the coverage devoted to these concerns slowly decreasing.