Before we move to the business of today's meeting and to the expected action by the General Council, allow me a few moments to briefly recap the process.

Further to the resignation of the former Director-General Roberto Azevedo one year ahead of his official term, in keeping with the Procedures agreed by the General Council in 2002 and contained in document WT/L/509, the process for the appointment of the next Director-General started with my communication to all Members on 20 May 2020, contained in JOB/GC/230. In that communication, I indicated that the one-month nomination process — that is, Phase One of the process — would start on 8 June 2020.

By the end of the nomination period, eight candidates had been nominated by their respective Governments. Given the urgency of the situation, in line with Paragraph 23 of the Procedures and further to a process of consultations I undertook in this respect, Members agreed that the duration of Phase 2 of the process — i.e. the Phase in which the candidates make themselves known to Members — would be of two months instead of three.

Still in keeping with the Procedures, the eight nominated candidates were invited to meet with Members at a formal General Council meeting, which was held from 15 to 17 July. At that meeting, each candidate made a brief presentation, including their vision for the WTO, followed by a question-and-answer period.

Guided by the views expressed by Members, on 31 July I announced the modalities for Phase 3 of the process — that is the consultation period to arrive at a final choice for appointment. Those modalities can be found in JOB/GC/243. I also indicated that, consistent with the Procedures, I would be assisted in this Phase by the Chairs of the Dispute Settlement Body and the Trade Policy Review Body acting as Facilitators — respectively, Ambassador Dacio Castillo of Honduras and Ambassador Harald Aspelund of Iceland.

The Facilitators and I conducted three rounds of consultations, starting on 7 September. The organization of work for these three rounds was the same.

In each round, Members were each asked the same question to express their preferences. All the information we received from Members was treated by us in the strictest confidence.

The Facilitators and I reported at Informal Heads of Delegation meetings the outcome of the consultations at each successive stage. My reports to these three informal HODs meetings — which were held on 19 September, 8 October and 28 October — were circulated in documents JOB/GC/244, 245 and 247 respectively. At the Heads of Delegation meeting on 28 October, in accordance with the Procedures, I, together with the Facilitators, reported the outcome of the third and final round of consultations and announced that we were submitting the name of Dr. Ngozi Okonjo-Iweala of Nigeria as the candidate most likely to attract consensus, and recommending her appointment by the General Council as the next Director-General of the WTO.

A special General Council meeting was then convened for 9 November. On 6 November, I circulated a communication to all Members in JOB/GC/248 in which I indicated that it had come to my attention that for reasons of the health situation and events at that time, delegations were not in a position to take a formal decision on 9 November. I postponed the meeting until further notice, and I continued to undertake consultations with delegations.

Recent developments have made it possible for the process to be taken forward, and for this meeting to take place today so that the General Council can take appropriate action.

In this respect, on behalf of the membership, let me express our gratitude to Her Excellency Minister Yoo Myung-hee of the Republic of Korea for her participation in this selection process, and for her ongoing commitment to and support for the multilateral trading system and for the WTO.

Let me also take this opportunity to formally pay tribute again to all candidates in this process. I am sure all Members agree that we have had eight exceptionally qualified candidates for this position, and their participation has enriched the process and the organization as a whole.

I would also like to express my sincere gratitude to the Facilitators, Ambassador Dacio Castillo and Ambassador Harald Aspelund. They have worked with enormous dedication and I would like to place on record their integrity, impartiality and commitment in this process.

And last but certainly not least, I would like to pay tribute to Members for their sustained engagement, support and constructive attitude, including during challenging times and through to the positive developments of these last few days. This has finally made it possible for us to take this process to its intended destination.

With these words, it is with great pleasure that I now turn to the business of today's meeting for appropriate action by the General Council. In accordance with paragraph 19 of the Procedures, I as General Council Chair, supported by the Facilitators, thereby recommend formally that the General Council agree to appoint Dr Ngozi Okonjo-Iweala of Nigeria as the next Director-General of the WTO, starting on 1st of March 2021 until 31 August 2025.

This appointment is made pursuant to paragraph 21 of the Procedures in document WT/L/509, mutatis mutantis; and the understanding reached by the General Council in July 2020 regarding interim arrangements will continue to apply until the beginning of the term of office of the DG-designate, on 1st of March 2021.

Can I take it that this is agreeable?

It is so agreed.

Thank you. This is a very significant moment for the WTO. On behalf of the General Council, I extend our warmest congratulations to Dr Ngozi Okonjo-Iweala on her appointment as WTO next Director-General and formally welcome her to this General Council meeting.

Dr Ngozi, on behalf of all Members I wish to sincerely thank you for your graciousness in these exceptional months, and for your patience. We look forward to collaborating closely with you, Dr Ngozi, and I am certain that all Members will work with you constructively during your tenure as Director-General to shape the future of this organization.

I reiterate once again my appreciation and gratitude for the constructive approach taken by all Members in developing and finalizing consensus in this appointment process, and it is with great pleasure that I now invite Dr Ngozi Okonjo-Iweala to take the floor. 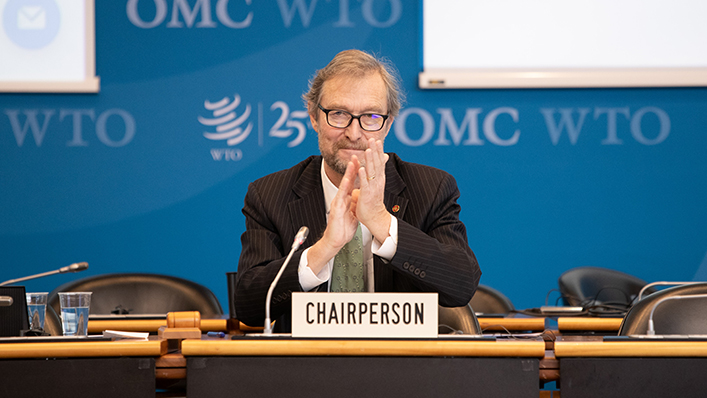