The conference was organized jointly with the UN Conference on Trade and Development (UNCTAD) and the International Trade Centre (ITC).  “This conference is not just about cotton. It is about people,” the Director-General noted.

Donors should listen carefully to the project needs and priorities presented by the Cotton-4 countries and other LDCs so that they can provide tangible support to help realize these homegrown projects, she said.

“LDCs will need our support to mobilise the financial and technical resources they need so that the millions of people whose livelihoods depend on this sector can envisage a better life for themselves and their families,” she added.

DG Okonjo-Iweala noted that cotton is a vital crop in over 30 African countries, generating some USD 1.5 billion in export earnings but that the sector had been hit hard by the COVID-19 pandemic.

A WTO study shows that, although cotton production has since bounced back to pre-pandemic levels in many LDCs, GDP per capita initially fell by 2.1% on average in ten LDCs the study examined. Cotton exports also dropped by 34% on average in value terms — corresponding to a USD 500 million loss in export earnings — though countries' experiences varied. Severe and persistent supply chain disruptions continue to jeopardise millions of jobs.

“Policymakers should aim to boost productivity sustainably, strengthen competitiveness and add value to cotton goods” in order to strengthen resilience to future shocks, the Director-General said.

The cotton and textile sector “provides an opportunity to foster local content and identity,” Afreximbank's Babajide Sodipo told the meeting.

“With the operationalization of the African Continental Free Trade Area, Africa must embrace industrialisation and fully engage its human capital and unique craftsmanship in this sector,” he added.

DDG Paugam also told the conference that participants needed to start acting on the priority projects highlighted by beneficiary countries. He said they should seek to establish a work schedule that would lead to dynamic new partnerships and operationalise the projects that had been put forward.

UNCTAD's Teresa Moreira called on governments and development partners to redouble support for cotton and cotton by-product projects in order to explore new sources of income for farmers. She said this could help address development priorities “such as poverty reduction, value addition and economic diversification”.

Escipión Oliveira, Assistant-Secretary General of the Organization of the African, Caribbean and Pacific States Secretariat (OACP) called for urgent support for the project funding requests put forward by African cotton-producing countries, which were introduced at the meeting by ministers and senior trade officials from the Cotton-4.

A “concrete commitment” to achieving the SDGs

Introducing cotton projects in need of support, Cotton-4 ministers pointed to challenges such as food insecurity and climate change, which hindered the development of the cotton sector in LDCs. Difficulties accessing finance and information also prevent small farmers from improving cotton output and participating in international trade, they said.

Chad's Trade Minister and Cotton-4 Coordinator, Ali Djadda Kampard, told the meeting that development partners play “an essential role” in enabling the country to develop its cotton production, improve its quality and ensure that raw production is transformed into finished products with higher added value for export.

Mali's Minister of Industry and Trade, Ould Mohamed, said that adequate financing for cotton development projects would “greatly contribute to improving the incomes and living conditions of the most vulnerable populations” in cotton-producing and exporting LDCs. It would also represent “a concrete commitment” towards achieving the Sustainable Development Goals, he added.

Representatives of the European Union, the United States, Brazil, the International Finance Corporation of the World Bank Group, the Enhanced Integrated Framework, the UN Industrial Development Organization and Better Cotton also welcomed the project proposals presented at the meeting. They said they were ready to engage with beneficiaries to work towards supporting implementation. They also shared information on strategies and experiences gained from the cotton projects they have supported to date and noted the importance of galvanising private sector investment.

Heads of three agencies initiated a “Call for Action” on cotton, which recognised the challenges hampering the ability of cotton-producing LDCs to compete. The Call for Action commits signatories to continue seeking solutions that would enable these countries to improve competitiveness, achieve higher yields and greener production, and add value both to fibre and by-products.

At the signing ceremony, the document was signed by DG Okonjo-Iweala along with representatives, from the ITC and UNCTAD, who also co-sponsored the Call for Action. Conference participants from the Cotton-4, UNIDO, the OACPS Secretariat, Afreximbank and Better Cotton also signed.

The document remains open for signature ahead of World Cotton Day on 7 October 2022. 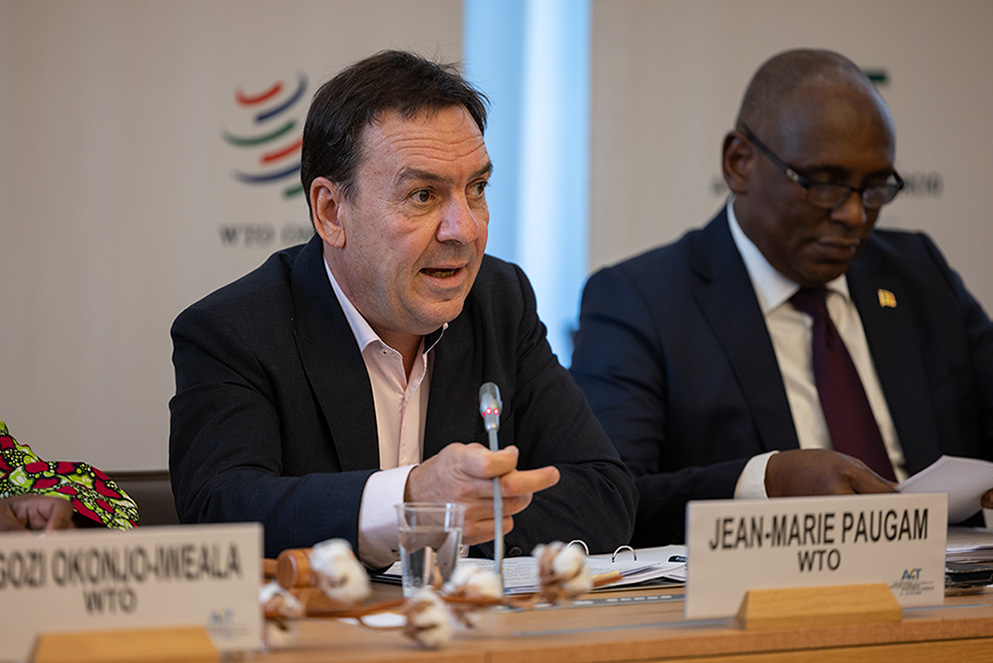