The ministers met with DG Okonjo-Iweala at the WTO High-Level Pacific Regional Event on Fisheries Subsidies. The Director-General said the voice of Pacific Island countries, including at the UN COP27 Climate Change Conference, was heard loud and clear on the threat that ocean and climate issues pose on the very existence of small island developing states. The Director-General also emphasized that future work at the WTO can help deliver on the Pacific's priorities including on people-centred development, better access to digital markets, greater climate security, and value addition to natural resources.

“Trade and cooperation on trade policy has to be part of the solution — for economic recovery, for food security, for price stability, for climate mitigation and adaptation, and for other global commons challenges,” DG Okonjo-Iweala said.

The Pacific Islands Forum ministers called for strong cooperation to implement the Agreement on Fisheries Subsidies and step up action on the second wave of negotiations. The ministers, in their joint statement, called on WTO members to ratify and implement the Agreement on Fisheries Subsidies as soon as possible, and committed tofurther negotiations to conclude a comprehensive agreement to give the fullest effect to United Nations Sustainable Development Goal 14.6 and to address outstanding issues.

The ministerial statement also highlighted WTO work on agriculture, including food security; COVID-19 response and future preparedness; development; trade and environment; WTO reform; and e-commerce as priorities for the region.

Fiji’s Minister for Commerce, Trade, Tourism and Transport, and Chair of the Pacific Islands Forum Trade Ministers, Honourable Faiyaz Siddiq Koya, commended the WTO for its engagement with and commitment to the Pacific region and to understanding the group's concerns. While speaking to Pacific ministers and officials, the minister emphasised the power of solidarity and having a common goal to shape the outcomes at the WTO.

Minister Koya also urged the Pacific Islands members to the WTO to collectively move forward, in terms of the Agreement on Fisheries Subsidies, for the betterment of the region, noting the decision must be for long-term sustainability of the Pacific's fisheries resources, food security and livelihood of the people.

The UN Secretary General's Special Envoy for the Ocean Peter Thomson emphasized at the meeting the need for Pacific Island members to the WTO to continue their strong leadership on fisheries subsidies by being amongst the first to ratify the Agreement and to do all that is necessary to commence and conclude the second wave negotiations prior to the 13th Ministerial Conference (MC13).

The WTO and PIFS signed a memorandum of understanding (MOU) for joint technical assistance for Pacific Islands Forum countries, which renews for the fifth time longstanding cooperation between the two secretariats for delivering regional technical assistance activities.

PIF Deputy Secretary General Filimon Manoni noted the strong cooperation between the WTO and PIF. He said the MOU will ensure that relevant technical assistance and capacity building on WTO issues will benefit Pacific Island countries to enhance implementation of obligations and increase their engagement in  multilateral trade negotiations. He further welcomed the adoption of the Ministerial Statement, which outlines the region’s priorities that will guide their work at the WTO in Geneva.

Ahead of the ministerial meeting, the WTO organized a two-day workshop with Pacific officials to provide a detailed understanding of the Agreement on Fisheries Subsidies and to facilitate an exchange among participating members on the Agreement's entry into force and implementation, and the second wave negotiations.

WTO Deputy Director-General Angela Ellard said: “The Pacific has been a significant and vital leader in the fisheries subsidies negotiations. We must work together to quickly accept the new agreement through carrying out domestic processes so we can begin to reap the benefits.  At the same time, we must negotiate the second wave of negotiations to bring further disciplines. The Blue Pacific 2050 strategy displays the leadership of the Pacific region for sustainable fisheries systems, as well as climate and digital trade.”

The Deputy Director-General's speech can be accessed here. 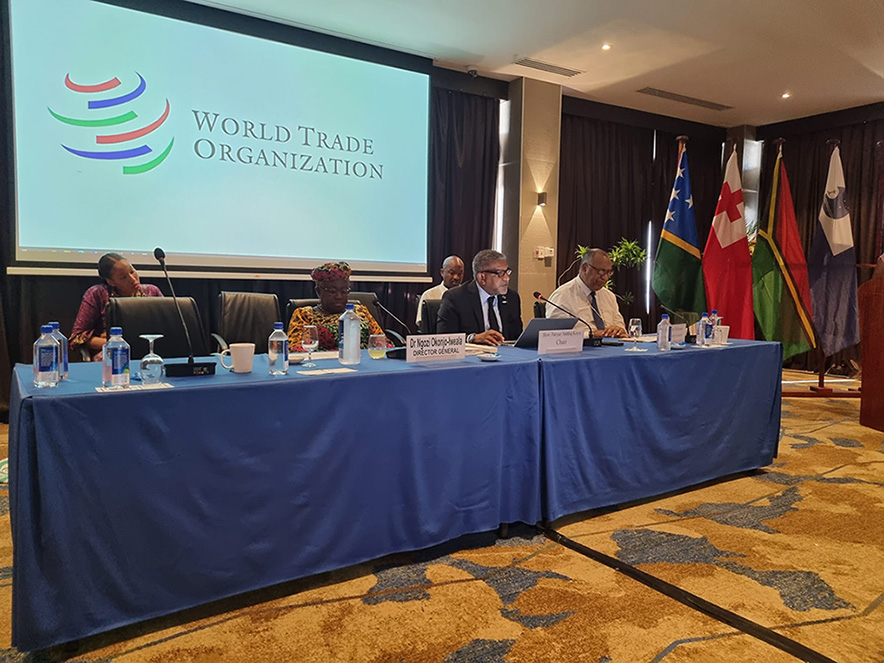