“Many gaps remain but we are making progress. Let us keep on the pressure, let us keep up the work at this critical juncture,” DG Okonjo-Iweala said in her role as Chair of the Trade Negotiations Committee (TNC). “The next hours will be critical. We need to use each hour effectively to close as many gaps as possible. The success of this whole endeavour is in our hands. Let us deliver. The people outside are waiting for us and, believe it or not, I really think we will do it.”

Following the reports from chairs and facilitators of the respective negotiating bodies working on potential MC12 deliverables, the DG summarized the state of play of what she characterized as the “four pillars plus”: fisheries subsidies, agriculture, the WTO response to the pandemic (including the waiver to the Agreement on Trade-related Aspects of Intellectual Property Rights) and WTO reform, plus development and least-developed country (LDC) issues. Members have agreed on the need to close the remaining gaps before MC12 in these areas, she said, and ministers should be able to work in Geneva “with a manageable agenda and ensure productive ministerial engagement.”

On fisheries subsidies negotiations, DG Okonjo-Iweala noted the progress made by ambassadors who have been engaging under the chairmanship of Ambassador Santiago Wills of Colombia to push the limits of their national positions in a search for compromise. With very little time left and some tough decisions still to be made, she said, progress must continue “so that we do not stand out as an organization that is not capable of supporting the livelihoods of small fisherwomen and men all over the world, or the sustainability of our oceans, which is so important.”

Ambassador Wills reported on work during the recent “Fish decision week” and various meetings in different configurations with delegations, with a view to addressing outstanding issues on balance and ambition in the negotiations, particularly focused on overfishing and overcapacity, non-specific fuel subsidies and transparency and notifications. In addition, he held meetings on territoriality, reflagging and notifications about forced labour. “I'm happy to report that some significant progress has been made,” he said.

Turning to agriculture, the DG referred to the three texts on the table: the draft Ministerial Decision on Agriculture, the draft Ministerial Declaration on Trade and Food Security and the draft Ministerial Decision on the World Food Programme. Noting that these texts represent a delicate balance taking into account members’ very divergent positions on the negotiating issues, she urged members to consider these proposals without prejudging the outcome of the negotiations that will take place amongst delegations after MC12. “I could not over-emphasize the importance of these texts, particularly in the context of the current global food crisis,” she said.

The chair of the agriculture negotiations, Ambassador Gloria Abraham Peralta of Costa Rica, indicated that delegations have entered into the very final stretch of negotiations where the question in front of members is whether the draft texts constitute an acceptable package that goes in the right direction for the WTO and its members, for the multilateral agricultural trading system and for addressing the ongoing global food challenges. “I'm firmly convinced this is the case,” she said.

On the WTO response to the pandemic, including the TRIPS waiver, the DG stressed that text-based  negotiations continue on both tracks with a view to achieving an MC12 outcome. “While the negotiations have been difficult,  I strongly believe that we have a real chance to deliver.  We should seize the current opportunity while a credible response remains relevant.”

Ambassador Dacio Castillo of Honduras, facilitator on the WTO's response to the pandemic, reported that delegations are working with “clean” texts including on general provisions, trade facilitation, regulatory cooperation, intellectual property, services, food security and some aspects of future work. He recalled that the entire document remains in square brackets, indicating that it is still under discussion. “Nothing is agreed until everything is agreed,” he said.

On the IP response to the pandemic, the TRIPS Council chair, Ambassador Lansana Gberie of Sierra Leone, said that despite the initial difficulties in this negotiation delegations have entered into real negotiation mode in the last 24 hours. “I'm feeling cautiously optimistic now that we will get this text ready for adoption by ministers in time for the coming weekend,” he said.

The DG also indicated progress made on WTO reform, an issue of the utmost political importance at a time when the WTO has been and continues to face critical challenges. “It is our collective responsibility, including at the highest level, to ensure that the WTO functions effectively to respond to all members' needs and contributes to addressing the most pressing issues in the world.”

Building on the work done so far in the services negotiations and given that services account for an increasingly significant part of world trade, the Ministerial Conference should not overlook this key area for all members, the DG said. “I hope that members can show the needed flexibility to finalize language in this area for the outcome document,” she added.

Finally on development and LDC issues, the DG called on members to work towards a mutually acceptable path forward, including on issues of critical importance to LDCs. “This is key to unlocking the WTO's capacity to deliver multilateral outcomes,” she said.

General Council chair, Ambassador Didier Chambovey of Switzerland, welcomed Mr Timur Suleimenov, First Deputy Chief of Staff of the President of Kazakhstan and chair of the 12th Ministerial Conference, who said he intended to meet with delegations and the chairs of the various negotiating groups.

“I hope that we can reach convergence and collectively deliver meaningful results at MC12. I know that there are still outstanding issues that need to be resolved, including the WTO response to the pandemic, food security and agriculture, WTO reform, fisheries subsidies and the TRIPS waiver,” said Mr Suleimenov. “I hope that in the coming days we will be able to overcome differences, demonstrate flexibility, and agree on meaningful results on all of these issues,” he added.

Ambassador Chambovey provided an update on his extensive consultations on the MC12 outcome document, the e-commerce work programme and moratorium, and graduation from LDC status. He also reminded members that the General Council agreed in November to forward draft decisions on the Work Programme on Small Economies and on TRIPS non-violation and situation complaints to MC12 for ministers' adoption.

Ambassador Chambovey said he will report to ministers on 12 June at the opening session of MC12, where he will formally transmit the results of the work done over the past few months.

“I echo the calls made by the Director-General and all chairs and the facilitator that reported today — to narrow gaps and clean texts as much as we can," he said. “This will hopefully help us arrive at our shared objective of a meaningful MC12. Let us do what it takes, we have no time to lose. Your engagement in the next few hours is crucial.” 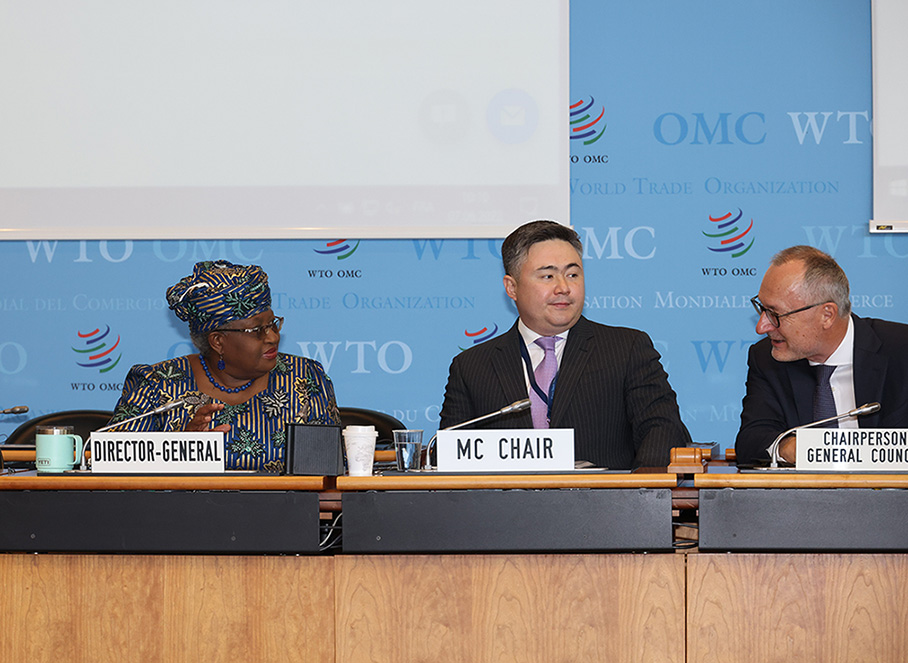