“An open rule-based world trading system is the foundation of our global economy,” the Director-General told the G20 leaders at the opening of the summit. “It has delivered unprecedented growth and development. It has enabled us to withstand the COVID-19 pandemic. And it will be key to achieving the ambitious goals you have set solving food and energy shortages, tackling climate change, financing development and getting the (UN Sustainable Development Goals) back on track.”

“Fragmenting this foundation would put these goals in jeopardy, worsening domestic prospects and geopolitical tension,” she added. “It would result in substantial global GDP losses, which could be double digit losses for developing countries.”

While the concept of “strategic competition” is a factor among today's global challenges, “we also know that strategic cooperation is key to tackling many of the same challenges. Therefore, we need to strengthen trade cooperation, not weaken it.”

According to a WTO Secretariat note issued last April, the breakdown of the global economy into rival trading blocs could reduce GDP in the long run by about 5 per cent, notably by restricting competition and stifling innovation.

The Director-General urged G20 leaders to lift export restrictions on food, feed and fertilizers, noting that the number of such restrictions have been increasing, with the world's poorest suffering most from such policies.  According to WTO estimates, of the 54 export restrictions currently in place, more than 40 per cent have been imposed by G20 economies, the DG noted.

“Please set an example, as some of you are beginning to do,” she told leaders. With regards to fertilizers in particular, “we are all worried, especially for Africa, which consumes only 3 to 4 per cent of the world's fertilizer supplies.”

The Director-General told G20 leaders that it was important that poor, debt-distress countries be supported through more open trade and increased output. She noted that a new joint study by the WTO and the UN Food and Agriculture Organization recommends, among other things, consideration of fertilizer contract swaps in favour of poor countries.

The G20 leaders issued a Bali Declaration at the conclusion of the summit on 16 November.  The Director-General said she was “pleased that the G20 communiqué was prominent in terms of highlighting trade issues and issues of concern to the WTO such as agriculture, export restrictions on food, and WTO reform.”

The G20 leaders also committed to reinforce international trade and investment cooperation to address supply chain issues and avoid trade disruptions. They said trade and climate/environmental policies should be mutually supportive and WTO consistent and contribute to the objectives of sustainable development. 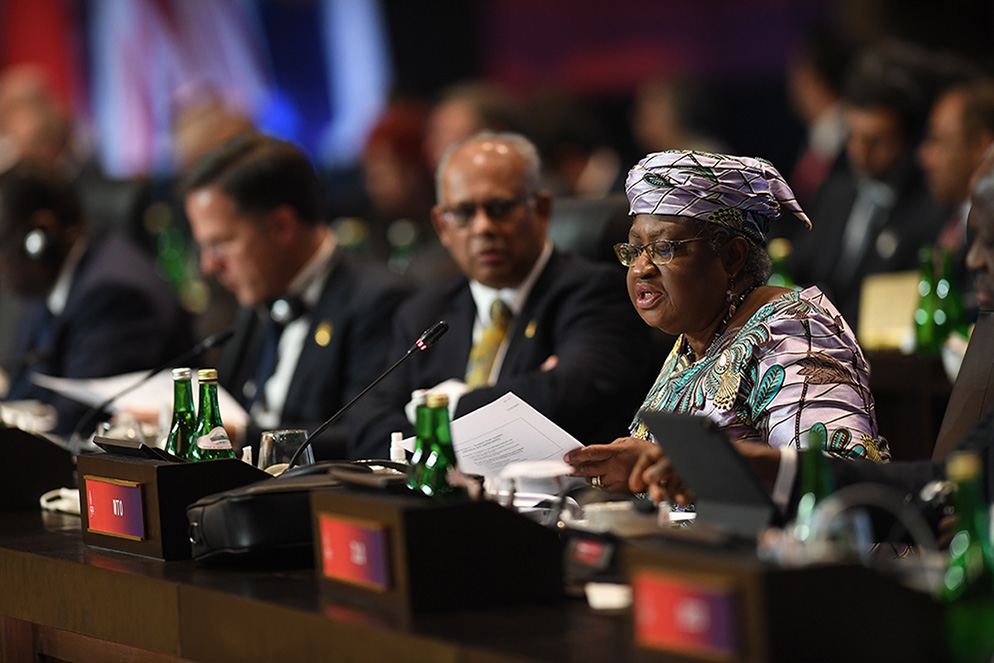