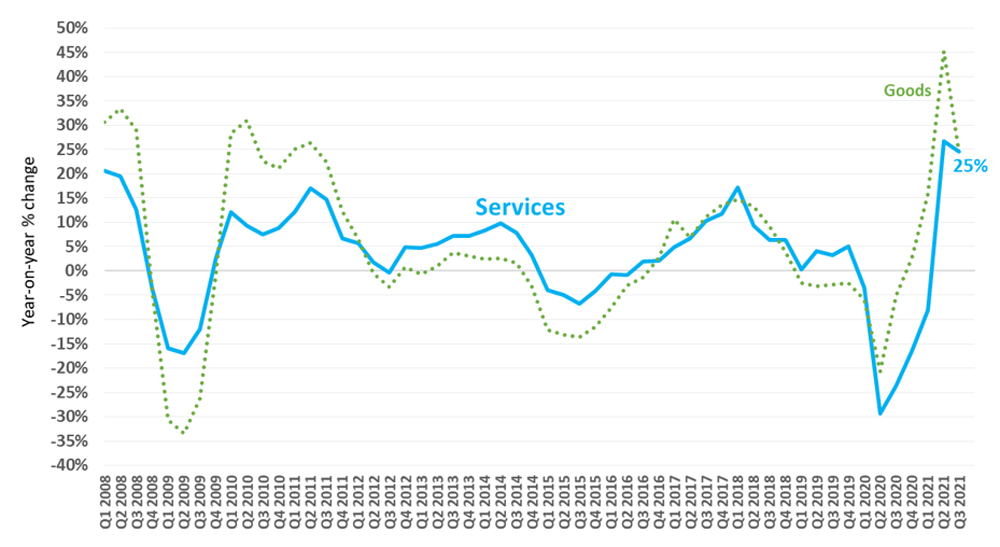 The third quarter services trade growth has kept pace with growth in trade in goods (24%) in the same period.

World transport services, in particular, rose 45% year-on-year in the third quarter of 2021, and by 12% compared with the same period of 2019. Recovery was boosted by soaring consumers' demand for goods due to lockdowns, the shift from services requiring physical proximity, and fiscal stimulus measures in advanced economies. The surge in demand coupled with pandemic-related restrictions resulted in port bottlenecks, misallocation of containers worldwide, and delays, which led to a strong increase in shipping rates. In the third quarter of 2021, Asia's transport exports rose by 71% year-on-year, and by 46% compared with the third quarter of 2019.

By contrast, the recovery of air passenger transport continued to lag, due to restrictions, remaining well below pre-crisis levels. Global international travellers' expenditure in the third quarter of 2021 grew 54% year-on-year from a very low base in 2020. However, it remained 52% below the value in the third quarter of 2019, before the pandemic.  European countries saw the lowest declines (-32%) compared to pre-crisis levels as travel restrictions were eased in the continent in the summer and cross-border movement was facilitated by COVID-19 vaccination passes. Asia travel exports, in comparison, were 81% below pre-pandemic values as several countries remained closed. Cambodia, the largest exporter among least-developed countries (LDCs), saw travellers' expenditure fall 97%.  LDCs' travel exports in the first half of 2021 were 67% below their value in the same period of 2019 according to preliminary estimates.

Transport, Travel and Other Services trade 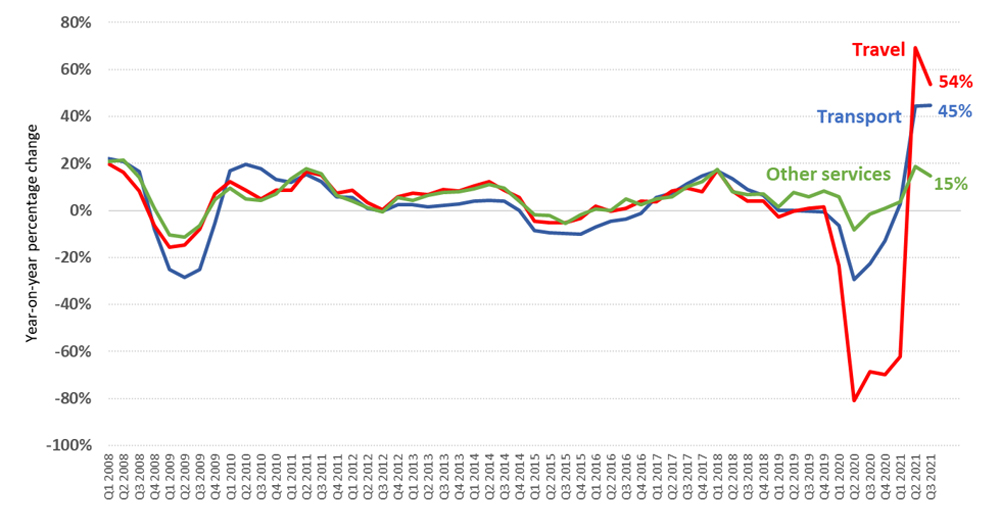 “Other services” — such as construction, recreational, legal and financial services — increased on average by 15% year-on-year in the third quarter of 2021. As a group, these services were less affected by the pandemic, with exports contracting by only 1% in 2020 on an annual basis. 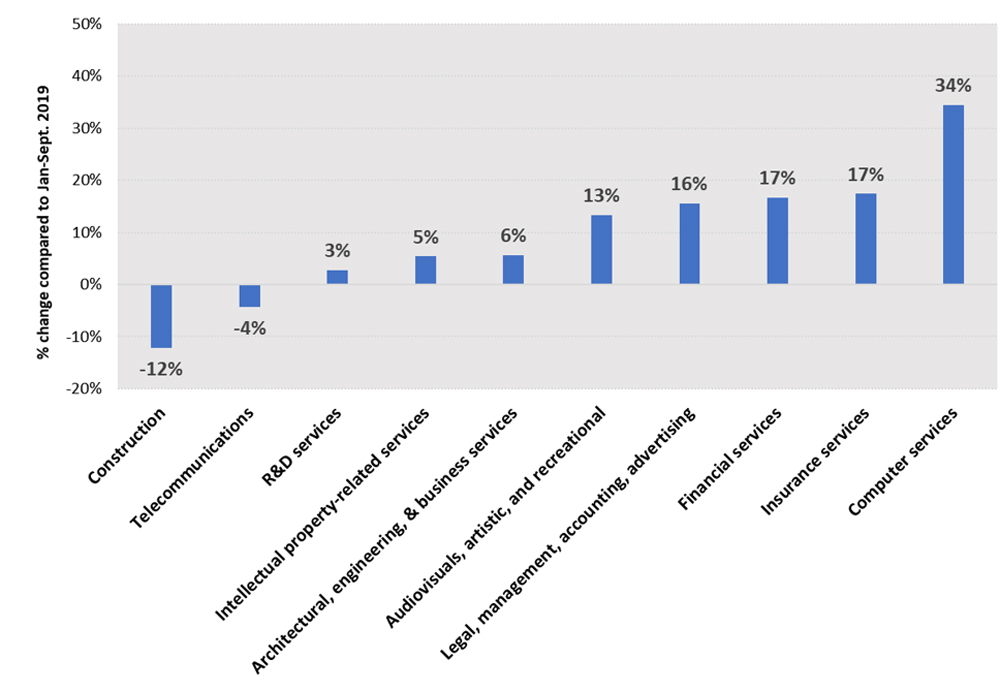 Computer services continued its impressive rise in January-September 2021, with cumulative exports up 34% compared with the same period of 2019. Rapid growth was recorded both in developed and developing economies: computer services exports increased 29% in the United States, 42% in Mauritius, 51% in Ireland, 63% in Ukraine, and 68% in Bangladesh.

Internet traffic peaked during the pandemic due to remote working, learning, entertaining as well as e-commerce. International Internet bandwidth expanded by an estimated 30% in the world in 2021 according to the International Telecommunication Union. Nevertheless, the value of telecommunications services fell by 4% in the first nine months of 2021 compared with 2019, reflecting steady declines in global prices, especially for bundled communication services.

By contrast, construction remains one of the sectors most affected by the pandemic. In 2020, world exports contracted by 18%. In the period January-September 2021, global construction exports were still down 12% compared with the same period of 2019.  In the European Union and China, the largest builders, exports were down respectively by 19% and 4% compared with 2019. Rising prices of essential inputs which cannot be easily substituted — such as steel (which faced supply chain bottlenecks) and labour (which saw shortages) — resulted in delays or cancellations of building projects.

According to the latest figures, the cumulative value of services exports in the period January-November 2021 remained below 2019 levels in many economies, with the sharpest decline recorded in Australia (-35%). In Africa, Morocco's and Uganda's services exports were 20% lower than in 2019. By contrast, services exports from China increased by 37% and from the Republic of Korea by 12% supported by transport services. Other Asian economies such as Pakistan and India exported more than before the pandemic owing to computer services. European countries showed differing trends. Luxembourg's services exports were up 21% due to financial services while large tourism exporters in the region continued to see a contraction. 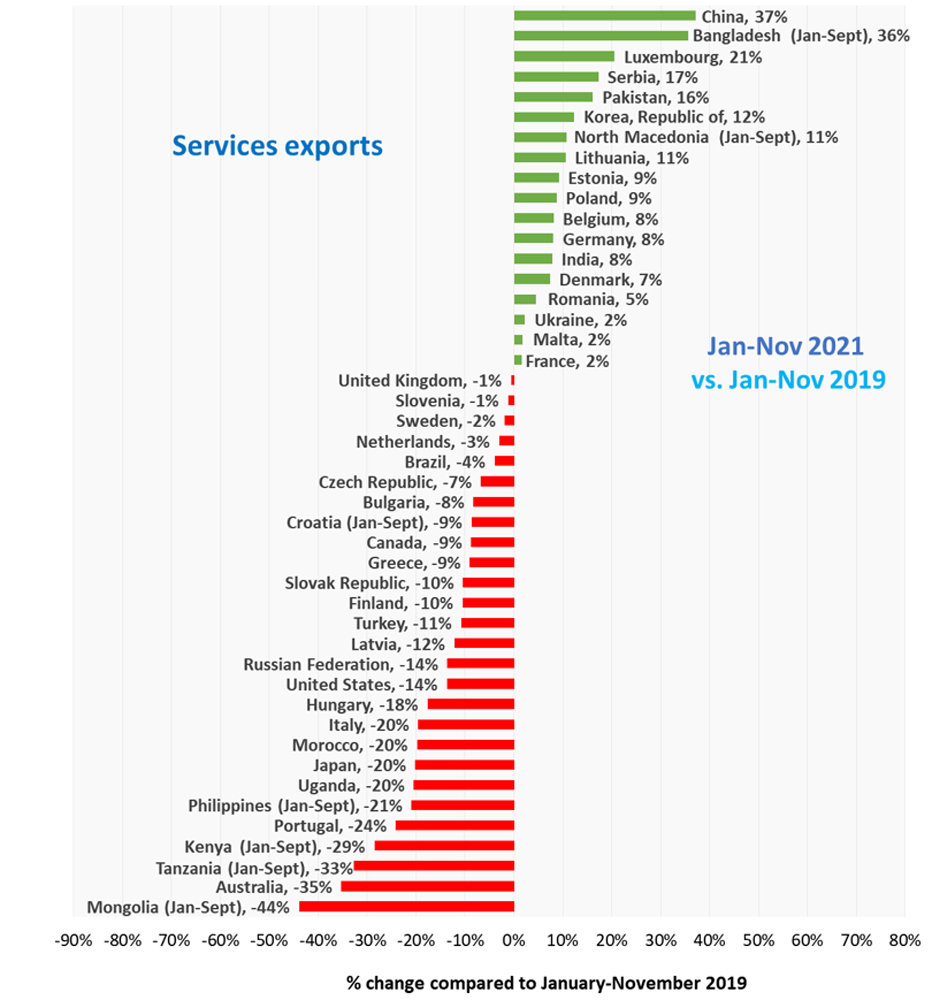