> More on Republic of Armenia 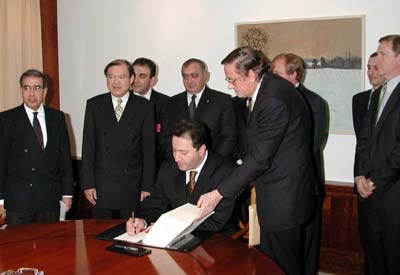 In his address to the Council, Armenian Prime Minister Andranik Margaryan said that acceding to the WTO was a historic occasion.

After the declaration of independence, the foreign economic and trade policy of Armenia has been directed towards integration into the world economy, stimulation of exports, attraction of investments and intensification of the cooperation with international organizations, he said.

After the Councils decision, Karen Chshmaritian, Minister of Trade and Economic Development, in a ceremony attended by WTO Director-General Supachai Panitchpakdi, signed the Protocol of Accession to formally complete the negotiating process.

Dr. Supachai welcomed the conclusion of Armenias negotiations which started in 1993 and said he was looking forward to Armenia becoming a full and active Member of the Organization.

This is a very significant event for Armenia and for the multilateral trading system, the Director-General said. Since achieving independence, Armenia embarked on a comprehensive process of democratisation, economic liberalization and market reform in which membership of the WTO is a decisive milestone. With Armenias accession, the WTO makes another important step in the goal of embracing all nations engaged in international trade.

The Protocol of Accession is now subject to the ratification of Armenias Parliament. Thirty days after the Secretariat receives official notification of this ratification, the country will become a Member of the WTO.

Among former Soviet Union Republics, Estonia, Latvia, Lithuania, Georgia, Moldova, and the Kyrgyz Republic are also members of the WTO. Azerbaijan, Belarus, Kazakhstan, the Russian Federation, Tajikistan, Ukraine and Uzbekistan are all in the process of negotiating their terms of accession.

H.E. Mr. Karen Chshmaritian, Minister of Trade and Economic Development of Armenia, signs Armenia's Protocol of Accession. Behind him is Prime Minister Margaryan who also came to Geneva to attend the General Council and Signing Ceremony.