“The transformation of trade has been underway for some time,” said WTO Director-General Pascal Lamy. “It is manifested most clearly in wider geographical participation in trade and the rise of international supply chain production. One element clearly stands out in the Report, and that is the importance of trade for development. The forecasts and reflections contained in this report do not foresee a reverse of globalization. But we should remember that the gains it brings could be nullified or at least mitigated if short-term pressures are allowed to override long-term interests, and if its social consequences in terms of the unevenness of its benefits are neglected. This is why renewed efforts are needed to revive the vibrancy of the global trading system.”

One of the most significant drivers of change is technology. Not only have revolutions in transport and communications transformed our world but new developments, such as 3D printing, and the continuing spread of information technology will continue to do so. Trade and foreign direct investment, together with a greater geographical spread of income growth and opportunity, will integrate a growing number of countries into more extensive international exchange. Higher incomes and larger populations will put new strains on both renewable and non-renewable resources, generating even greater need for careful resource management. More effort must also be devoted to addressing environmental issues, the report says.

Economic and political institutions will continue to have a significant role to play in shaping international co-operation, including in trade, as will the interplay of cultural customs among countries. Non-tariff measures will gain in prominence and regulatory convergence will likely constitute the greatest challenge to the trading system of the future. The future of trade will also be affected by the extent to which politics and policies successfully address issues of growing social concern, such as the availability of jobs and persistent income inequality, as well as environmental concerns, say the authors of the World Trade Report 2013.

Main points of the Report 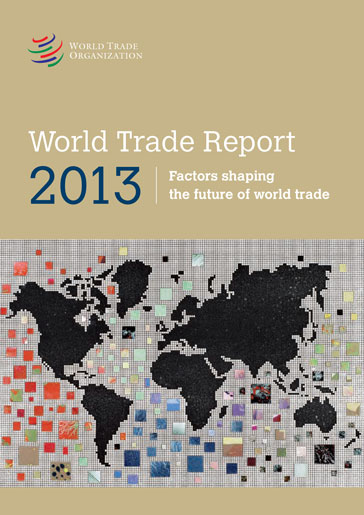