Renato Ruggiero, the first man selected to be Director-General of the World Trade Organization, has died in Milan at age 83.

A man of prodigious energy and determination, Mr. Ruggiero served as Director-General from 1995 to 1999. A product of the Italian diplomatic service, Mr. Ruggiero believed the WTO and the multilateral trading system were powerful tools for peace and prosperity. He was highly adept at finding common ground amidst a myriad of seemingly contradictory negotiating positions. In the late 1990s, he played an important role in brokering three important WTO agreements covering information technology products, trade in telecommunications services and trade in financial services.

Mr. Ruggiero was instrumental in guiding Ministers through the First WTO Ministerial Conference in Singapore in 1996. In Singapore, the WTO deepened its activities devoted to the Least-developed countries and commenced its work on trade facilitation, which is today among the most important issues on the WTO’s negotiating agenda.  In 1998, Mr. Ruggiero oversaw the commemoration in Geneva of the 50th anniversary of the multilateral trading system which included the participation at the 2nd Ministerial Conference of many heads of state and government, including South African President Nelson Mandela, US President Bill Clinton, British Prime Minister Tony Blair, Cuban President Fidel Castro and Brazilian President Fernando Henrique Cardoso. Mr. Ruggiero was the first Director-General to call for elimination of all quotas and duties on exports from the world's poorest countries.

“We have lost a true champion of multilateralism in Renato Ruggiero. He helped to build a firm foundation for the WTO which made this organization stronger and better able to serve WTO members and their citizens. I first met Renato in the late 1980s when we both served as Sherpas to the G-7 group of industrial countries. I knew him to be an internationalist who believed that the path to a better future lay in strong institutions that are dedicated to building bridges between people. In Italy, in Europe and on the world stage, Renato Ruggiero dedicated his life to bringing people together. Our thoughts are with his family and friends,” said WTO Director-General Pascal Lamy. 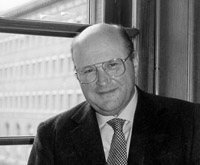