The WTO is now predicting global merchandise trade volume growth of 10.8% in 2021—up from 8.0% forecasted in March—followed by a 4.7% rise in 2022 (Table 1). Growth should moderate as merchandise trade approaches its pre-pandemic long-run trend. Supply-side issues such as semiconductor scarcity and port backlogs may strain supply chains and weigh on trade in particular areas, but they are unlikely to have large impacts on global aggregates. The biggest downside risks come from the pandemic itself.

Behind the strong overall trade increase, however, there is significant divergence across countries, with some developing regions falling well short of the global average.

"Trade has been a critical tool in combatting the pandemic, and this strong growth underscores how important trade will be in underpinning the global economic recovery," Director-General Ngozi Okonjo-Iweala said. "But inequitable access to vaccines is exacerbating economic divergence across regions. The longer vaccine inequity is allowed to persist, the greater the chance that even more dangerous variants of COVID-19 will emerge, setting back the health and economic progress we have made to date."

"As we approach the 12th Ministerial Conference, members must come together and agree on a strong WTO response to the pandemic, which would provide a foundation for more rapid vaccine production and equitable distribution. This is necessary to sustain the global economic recovery. Vaccine policy is economic policy - and trade policy," she said.

The large annual growth rate for merchandise trade volume in 2021 is mostly a reflection of the previous year's slump, which bottomed out in the second quarter of 2020. Due to a lower base, year-on-year growth in the second quarter of 2021 was 22.0%, but the figure is projected to fall to 10.9% in the third quarter and 6.6% in the fourth quarter, in part because of the rapid recovery in trade in the last two quarters of 2020 (Chart 1). Reaching the forecast for 2021 only requires quarter-on-quarter growth to average 0.8% per quarter in the second half of this year, equivalent to an annualized rate of 3.1%. 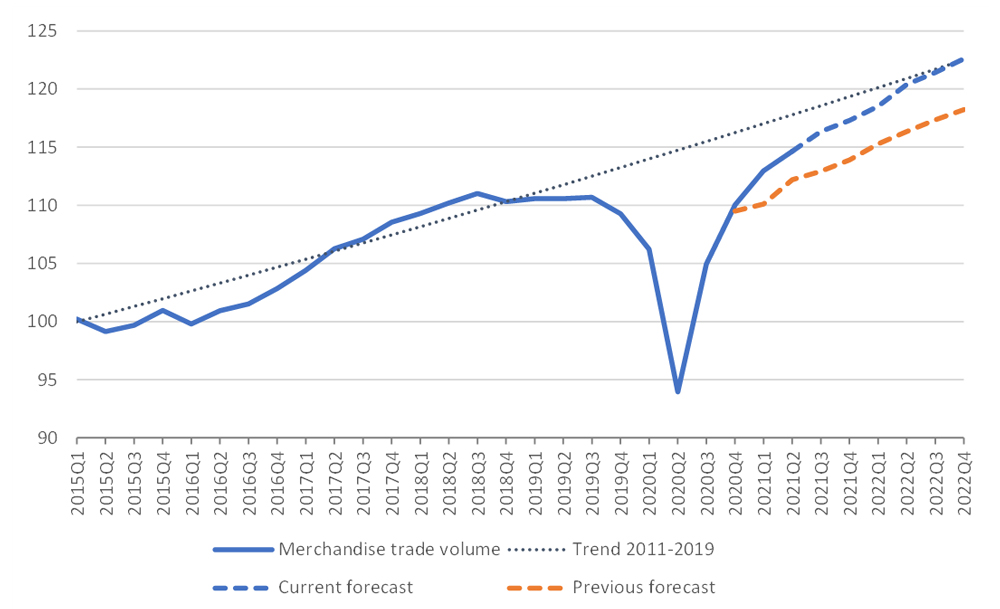 The trajectory of the current merchandise trade forecast in Chart 1 is close to the upside scenario discussed in the WTO's most recent forecast of 31 March. That scenario depended on a number of assumptions, including an acceleration in the production and dissemination of COVID-19 vaccines. More than 6 billion doses have been produced and administered worldwide. This is a remarkable achievement, but unfortunately still insufficient, because of sharp differences in access across countries. To date, only 2.2% of people in low-income countries have received at least one dose of a COVID-19 vaccine.(1) Failure to vaccinate in all countries against COVID-19 has led to a two- track recovery, with slower growth in countries with limited access to vaccines, which are frequently those that had the least fiscal space to support businesses and households. This divergence creates space for the emergence and spread of new, potentially vaccine-evading forms of the virus, which could result in the reimposition of health-related controls that reduce economic activity.

Trade volume growth is set to be accompanied by market-weighted GDP growth of 5.3% in 2021 and 4.1% in 2022 (revised up from 5.1% and 3.8% previously). GDP growth has been spurred on by strong monetary and fiscal policy support, and by the resumption of economic activity in countries that have been able to deploy COVID-19 vaccines at scale.

In the years before the global financial crisis (1990-2007), world merchandise trade grew around twice as fast as world GDP at market exchange rates, but subsequently slowed to about the same rate on average. The current trade projections imply that the ratio of trade growth to GDP growth will rise to 2.0:1 in 2021 before falling back to 1.1:1 in 2022. If the forecast is realized, this would indicate that the pandemic will not have had a fundamental structural impact on the relationship between world trade and income.

Risks to the forecast remain on the downside, but the relative importance of those risks is difficult to gauge. They include spikes in inflation, longer port delays, higher shipping rates, and extended shortages of semiconductors, with supply side disruptions being exacerbated by the rapid and unexpectedly strong recovery of demand in advanced and many emerging economies. The pandemic itself presents potentially even bigger risks to world trade and output, particularly if more deadly variants were to emerge. The highly contagious Delta variant has already prompted governments to reinstate some containment measures.

The recent upticks in inflation are probably temporary, driven by supply-side shocks affecting certain sectors in specific economies balanced against the unexpectedly strong recovery in demand. However, if inflationary expectations do become entrenched, central banks may feel the need to tighten policy early. This could create negative spill-overs, which would eventually hit trade flows. The period after the pandemic may see some periods of volatility as monetary policy normalizes and as governments shift to more sustainable fiscal policies.

Chart 2 shows quarterly growth in the volume of merchandise trade by region since 2019, the last full year before the COVID-19 pandemic. Because the depth of the recession in 2020 differed from one region to the next, 12-month year-on-year growth rates do not illustrate the crisis's impact on each region's trajectory as effectively as cumulative projected trade growth over the three years between 2019 and the end of 2022, visible in the divergence between the lines for each region.

It appears that regions with oil-reliant export bases suffered large declines in both merchandise exports and imports during the 2020 recession, and that these losses have since been only partly recovered. South America's relatively strong import recovery also reflects base effects from recessions in some of the region's key economies in 2019.

Table 1 summarizes the WTO's annual forecasts for merchandise trade volume and real GDP at market exchange rates from 2017 through 2022. The annual figures differ slightly from the quarterly numbers for reasons of statistical methodology, but they tell a similar story of regional divergences. In addition to the five WTO regions, the table also includes estimates for Least-Developed Countries (LDCs). The numbers show that the poorest countries saw their merchandise exports decline less than the global average in 2020, while their imports declined more. 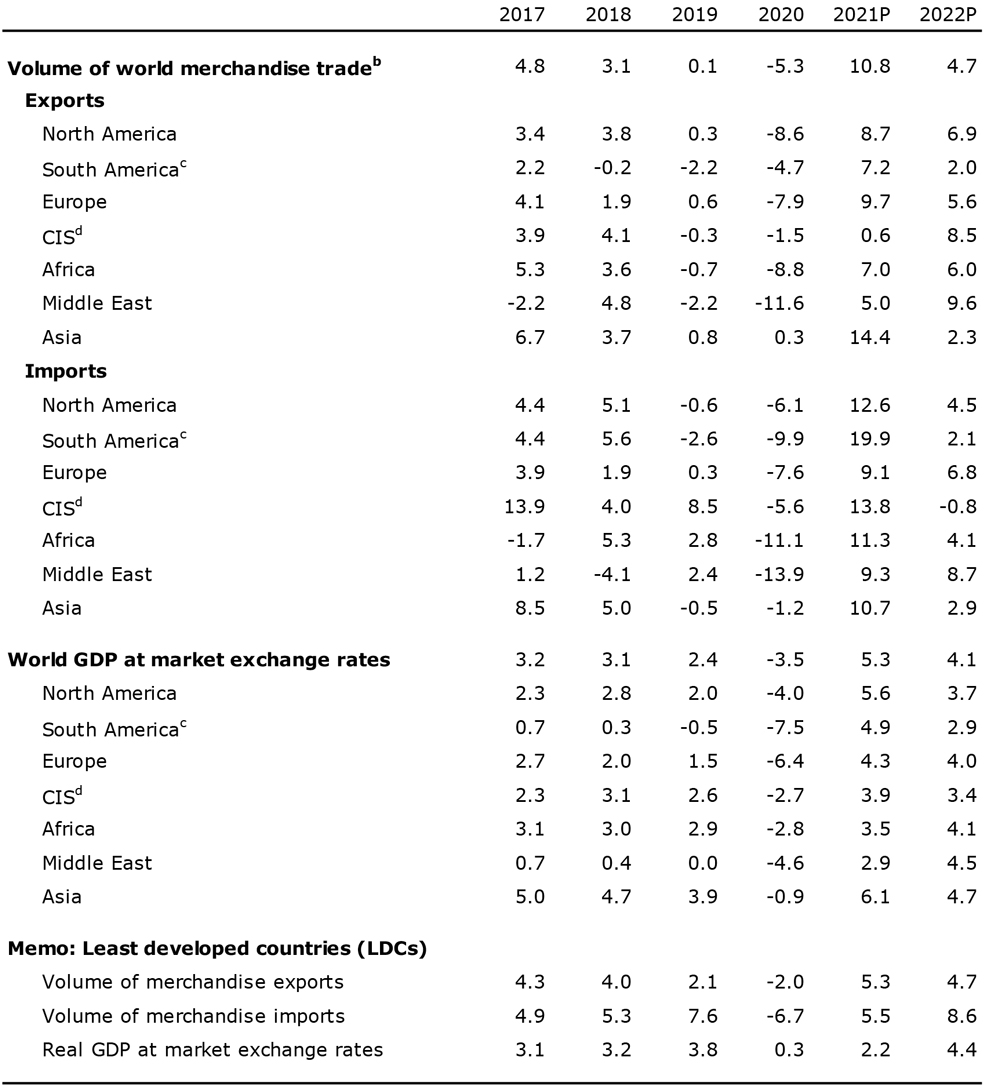 a          Figures for 2021 and 2022 are projections.
b          Average of exports and imports.
c           Refers to South and Central America and the Caribbean.
d        Refers to Commonwealth of Independent States (CIS), including certain associate and former member States.
Note:       These projections incorporate mixed-data sampling (MIDAS) techniques for selected countries to take advantage of higher-frequency data such as container throughput and financial risk indices.
Sources:  WTO for trade, consensus estimates for GDP.

The WTO's latest statistics on merchandise trade in nominal US dollar terms are released in conjunction with the trade forecast. These and other statistics can be downloaded from the WTO's online database.

Chart 3 shows estimated year-on-year growth rates for several categories of manufactured goods trade through the second quarter of 2021. The drop in automotive products trade in the month of June is unusually large compared to other goods categories. The decline could be related to the recent shortage of semiconductors in the automotive industry, which has disrupted car production worldwide. It is notable that the category Integrated circuits shows no such decline. Integrated circuits may have been diverted to other uses during the pandemic (e.g. consumer electronics), leaving limited supplies for automotive applications once production ramped up. 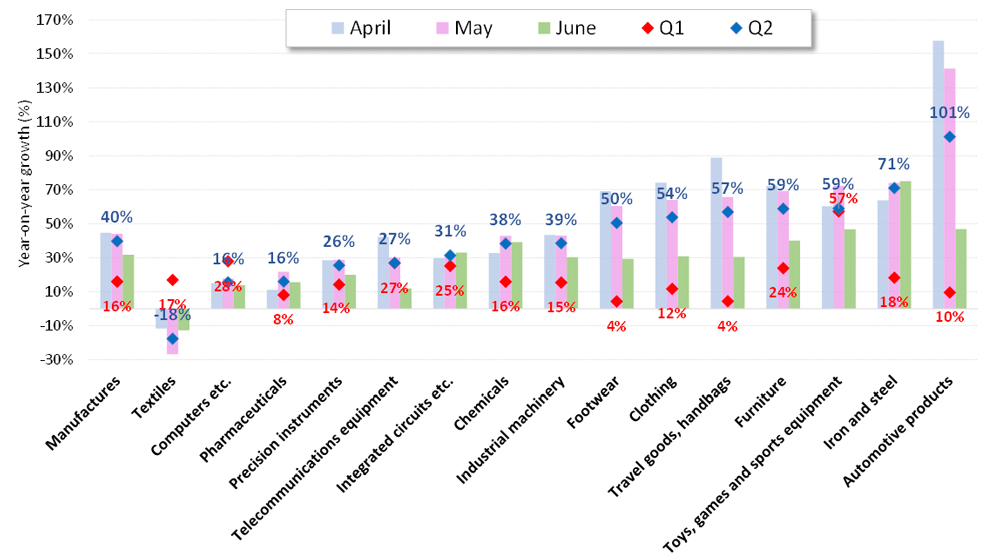 WTO statistics on commercial services trade for the second quarter will not be available until later in October, but Chart 4 below shows developments through the first quarter. Services trade overall was down 9% year-on-year in the first quarter, largely as a result of continued weakness in Travel, which was down 62%. In contrast, the category Other services, which includes financial and other business services, was up 6% compared to the previous year. Year-on-year growth in services trade is likely to turn positive in the second quarter due to a low base value in 2020, but this should not be automatically interpreted as a turnaround. The WTO's most recent Services Trade Barometer of 23 September suggests that trade in services may be stabilizing along a lower trend than before the pandemic. 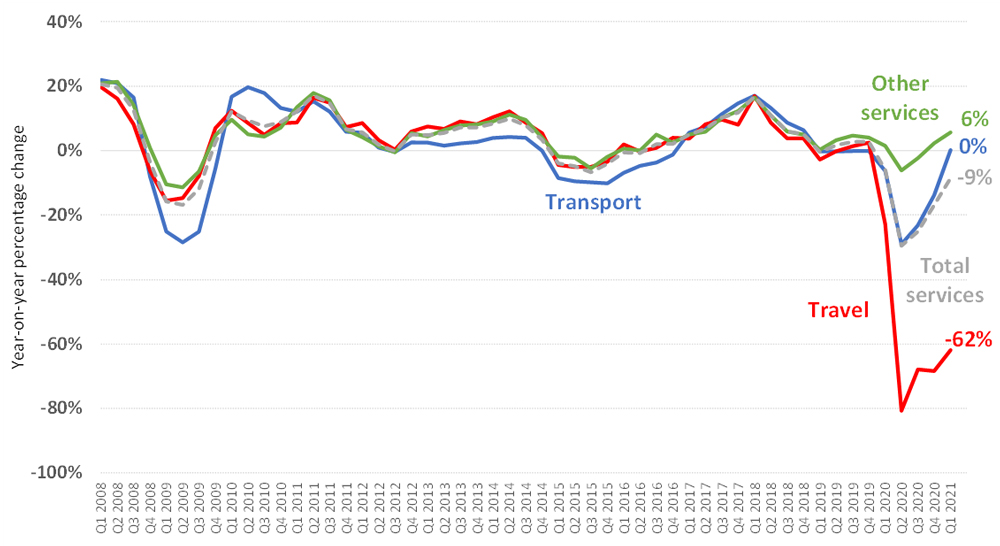 The WTO has been tracking timely, high-frequency trade-related indicators to better understand trends in merchandise and commercial services trade. A selection of these is presented below to provide additional context to the trade forecast and statistics.

Purchasing managers' indices (PMIs) from IHS-Markit are based on surveys of hundreds of businesses in more than 40 countries. PMIs for individual countries are aggregated into a global index, with values greater than 50 indicating expansion and values less than 50 denoting contraction. The Global Manufacturing PMI and certain sub-indices shown in Chart 5 casts light on the recent problems of port congestion (with delivery times becoming much longer, as shown by the steeply deteriorating sub-index far below 50) and high prices for shipping services.

Despite COVID-related interruptions, container throughput in international ports remains at or near record levels. Meanwhile, shipping rates have risen dramatically, exemplified by a more than four-fold rise in the Shanghai Containerized Freight Index over the past year. The spike in shipping rates coincided with a strong rebound in the New Export Orders component of the global manufacturing PMI, indicating surging global import demand. Prices of manufacturing inputs and final goods also rose, while stocks of finished goods dipped, and delivery times stretched out.

The New Export Orders index peaked at 54.9 in May of this year but has since fallen to 51.0 in August, suggesting a cooling of global import demand. At the same time input and output prices have started to ease, delivery times have plateaued, and stocks of goods have turned up. This suggest that high shipping rates and backlogs of ships waiting to unload goods in ports may have peaked, although it could take some time for prices to come down and for backlogs to clear.

A global shortage of semiconductors has recently disrupted supply chains in the automobile industry, leading to cuts in production and sales. This is illustrated by Chart 6, which shows recent declines in car sales in the United States, the European Union and China. The right panel of the chart shows that trade in semiconductors was falling long before the pandemic but that it has recently picked up again, which should help restore production of vehicles that use semiconductors intensively. Although leading semiconductor producing countries have had COVID-19 outbreaks recently, the problem seems to be one of demand for chips exceeding supply. This chart suggests that trade in automotive products may dip in the third quarter of 2021, but that any such decline will probably be temporary.

Finally, Chart 7 below shows the daily volume and average tone of news reports containing phrases related to economic activity, as monitored by the GDELT Project Summary Service. Such indicators can be used as signals of changing economic sentiment. At the start of the pandemic volume rose sharply and tone became extremely negative, as media reports anticipated a strong economic downturn. Once measures to contain the spread of the SARS-CoV-2 virus were taking effect and vaccines were on the way, volume declined and tone improved. The recent volume of press reports related to economic activity has been steady and the tone of reporting has seen some recent downward then upward variation, implying some short-lived uncertainty around otherwise rather stable expectations on economic activity. 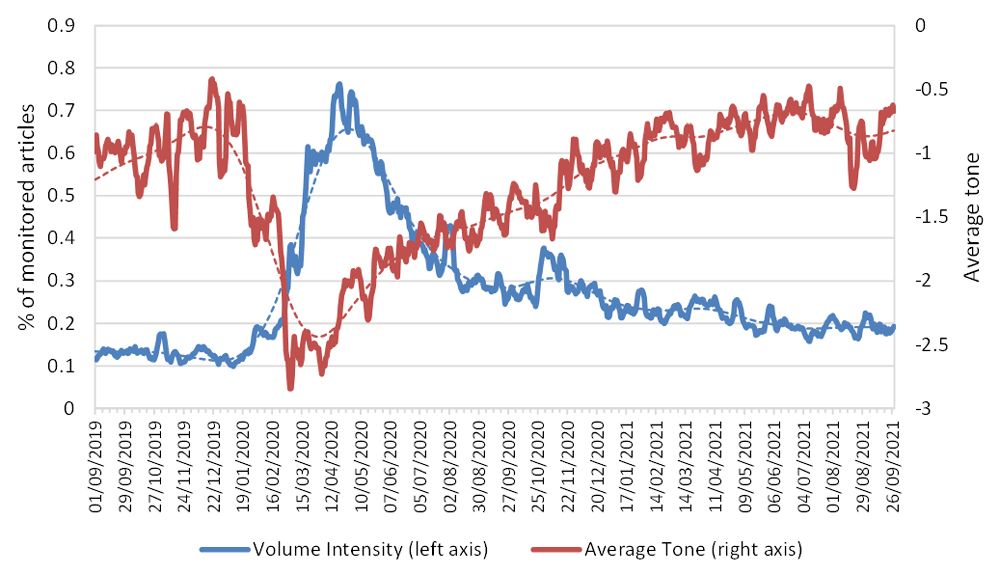 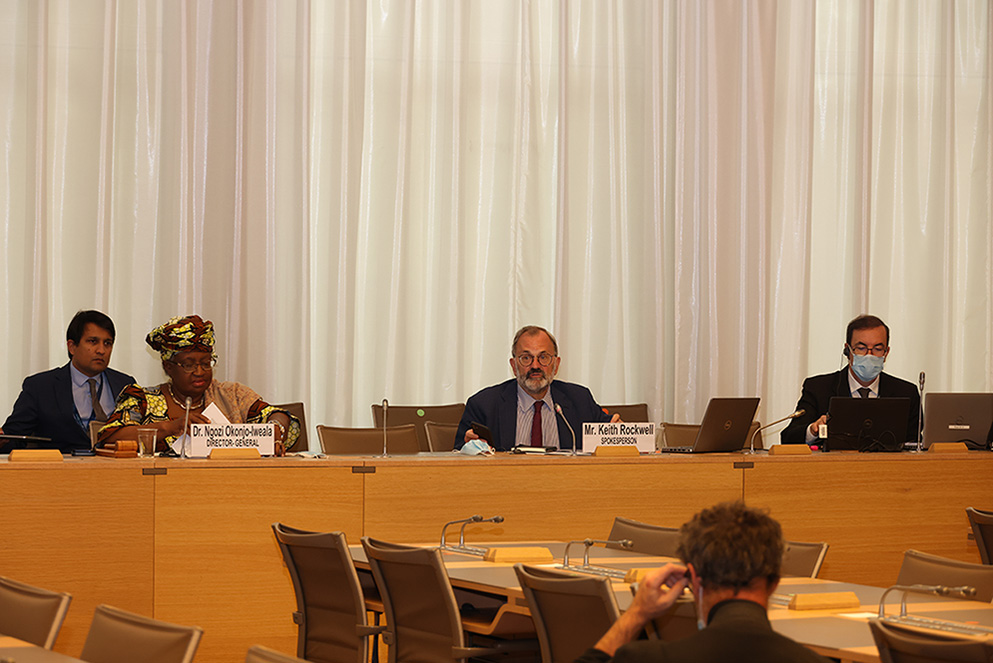