I’d like to talk to you about the current situation in the DSB: the challenges we face, what we’re doing to overcome them — and what more we may need to do.

There is no question that the WTO’s dispute settlement system has been a success. The numbers tell their own story about how valued it has become.

So we have seen a remarkable level of activity.

Looking at the economic importance of the system, researchers found that, in the first 16 years of the DSB, we handled disputes covering at least US$1 trillion of trade flows.

And members clearly hold the system in high esteem. Two thirds of our membership have participated in the system in one way or another.

It has been suggested that the ever-increasing number of RTAs might pose a challenge, but this has not proved to be the case.

Most dispute settlement mechanisms provided for in RTAs are rarely used — indeed, some have never been used at all. Yet one in every five of WTO disputes involve parties who are also parties to RTAs.

This means that the system is in very high demand.

In fact, as you are aware, we are experiencing unprecedented volume of work in dispute settlement.

And while this is welcome, it does create some very real challenges.

So let’s take a look at the current situation in the DSB.

I won’t spend too much time on this today as I want to focus more on prescription, rather than diagnosis.

The total number of active proceedings being serviced by the Legal Affairs Division, Rules Division, and the Appellate Body Secretariat has roughly doubled since 2012.

Our estimates suggest that this is not just a temporary surge and I do not believe that dispute settlement volume will soon diminish. In fact, 2014 is moving faster than 2013 in terms of the number of panels established by this time of year.

As for appeals, you are well aware that the rate of appeal has always been very high — and much higher than expected when the negotiators created a body of 7 part time Members. The average rate of appeal is approximately two-thirds.

This means we should prepare for around 10-12 appeals being filed per year during the next 24 months including possible appeals in the two complex aircraft cases.

If we shut the doors today, panels and the Appellate Body will have enough work to keep them and their Secretariat staff busy for the next 2 years. But of course the doors will not be shut — new requests will keep coming in.

But it is not just the number of disputes and appeals that places demands on the dispute settlement system.

Disputes are generally much more complex now than they were in the first decade.

It is now common for disputes to involve multiple parties advancing a variety of claims with more voluminous submissions, increased third-party participation, more demand for translation, and greater procedural complexity.

I am now going to show a few slides illustrating the upward trend in the complexity of disputes: 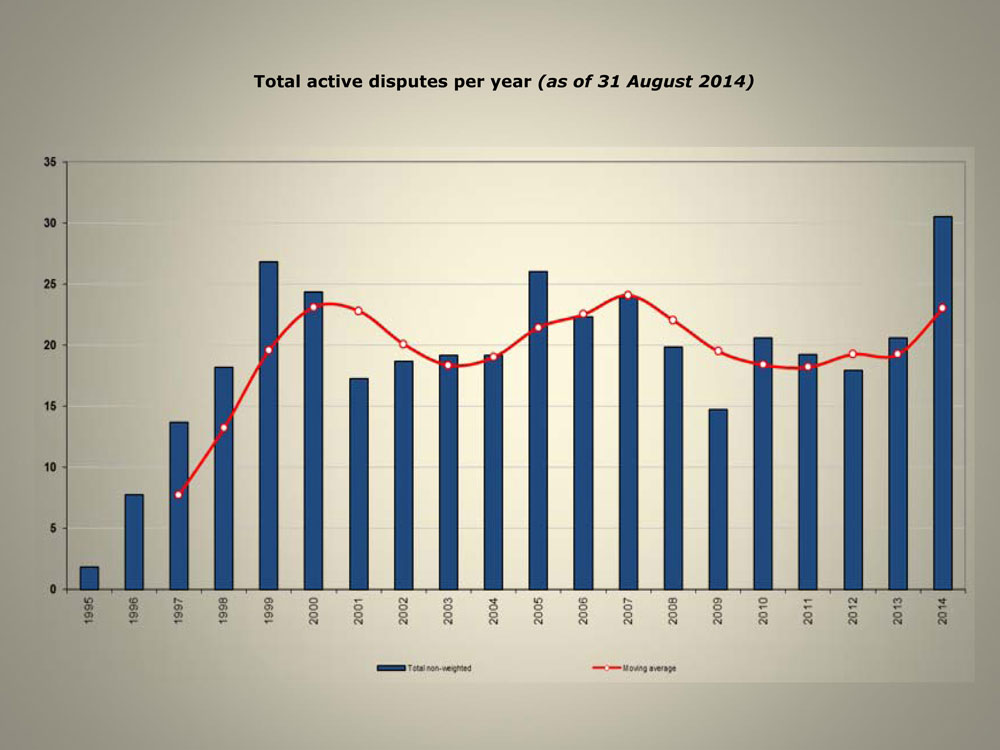 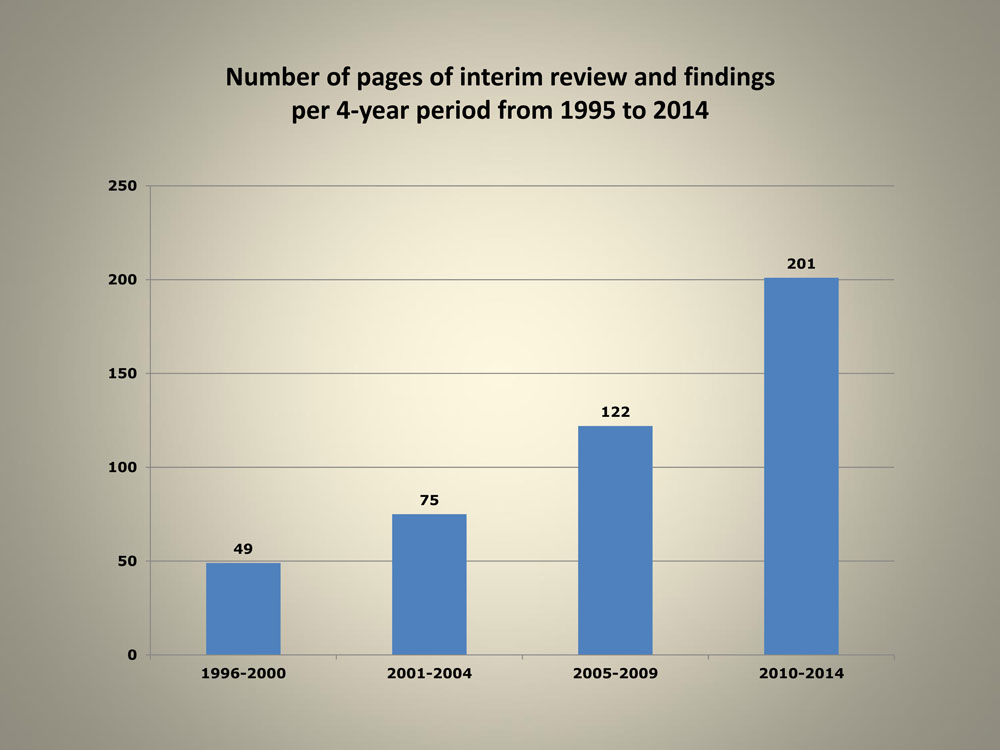 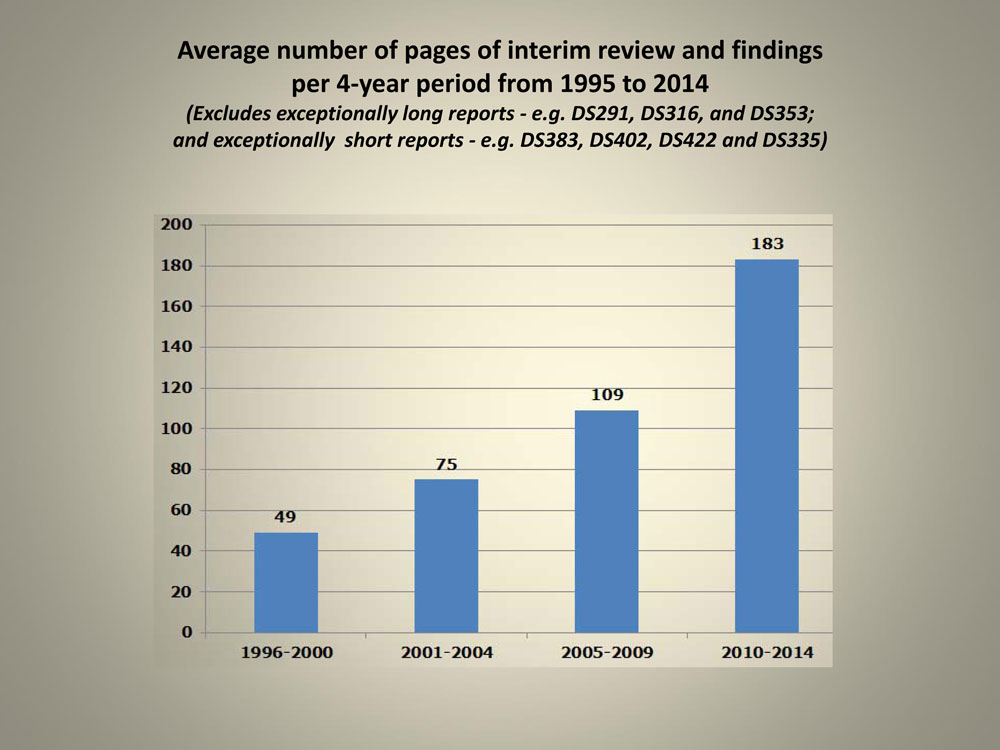 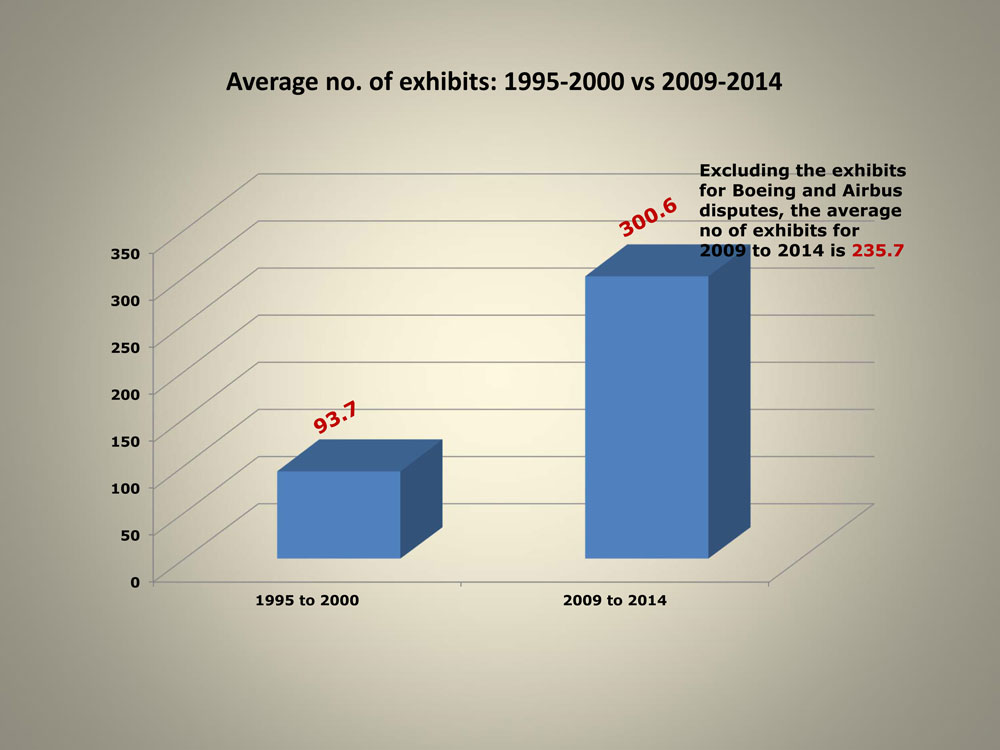 As with the upward trend in the number of cases, I don’t expect this increased level of complexity to change.

We are in a situation where the demand is severely testing our capacity. And there are some clear constraints on our ability to extend that capacity — such as the budgetary situation and some aspects of how the system was designed.

For example, we have had some difficulties in retaining staff, which have contributed to some extent to the challenges we are facing. Speaking frankly, the private sector, and others, can offer WTO dispute settlement lawyers more stable and lucrative long-term working conditions and better career advancement opportunities. That’s just reality.

We therefore lost a number of trained and experienced lawyers — and their institutional and case law memory.

Under the present circumstances, we need senior and experienced lawyers to lead panel teams, especially bearing in mind that panellists are part-time. And some of them are not experienced with the system.

The intensity of the work required to complete an appeal within the 90 day timeframe means that it is not possible for an Appellate Body Member to serve on two divisions with identical or largely overlapping schedules.

Therefore, even if we could service more panels than we currently do, we still have an insurmountable bottleneck at the Appellate Body stage.

All these factors explain why some Members are experiencing delays with panels getting up and running after composition. It also explains why the Appellate Body will need more than 90 days to complete some appeals over the coming months and why parties may have to wait for an appeal slot to become available.

I can assure you that we are cognisant of the delays that some of you have experienced recently, particularly after panel composition.

I want to be clear that in working through cases, we are proceeding in a strictly chronological order without discrimination or favoritism. There is no arbitrary or subjective approach to determining the sequence.

So, in very plain terms, that’s where we stand today.

When I started the job this time last year, I found that things were even worse than I had expected. It was an emergency situation. 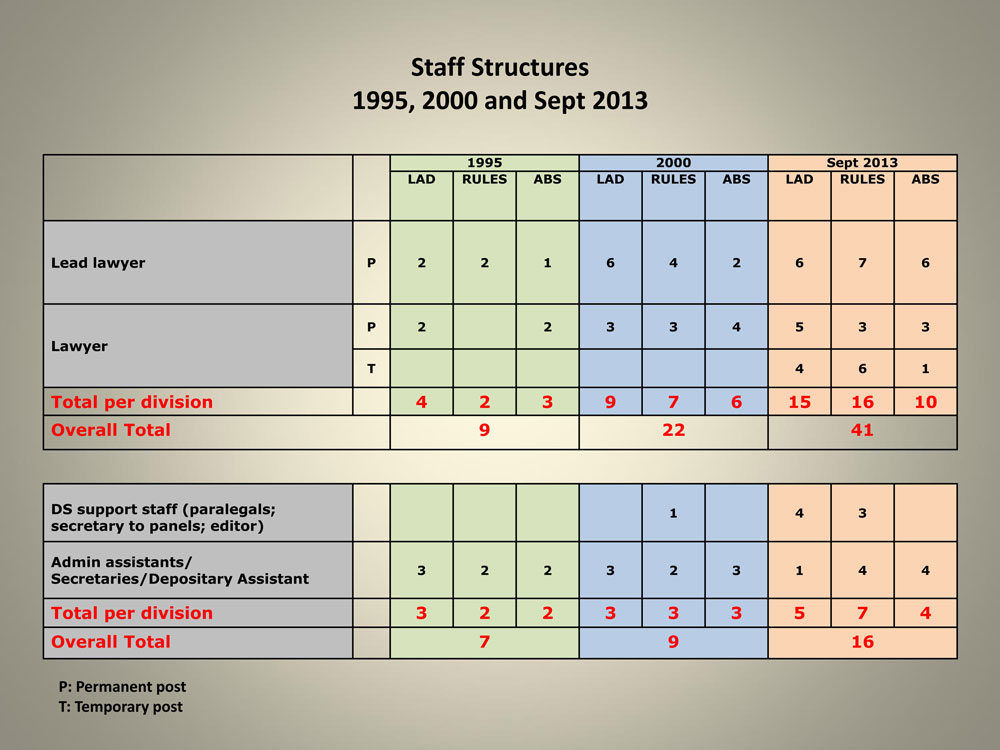 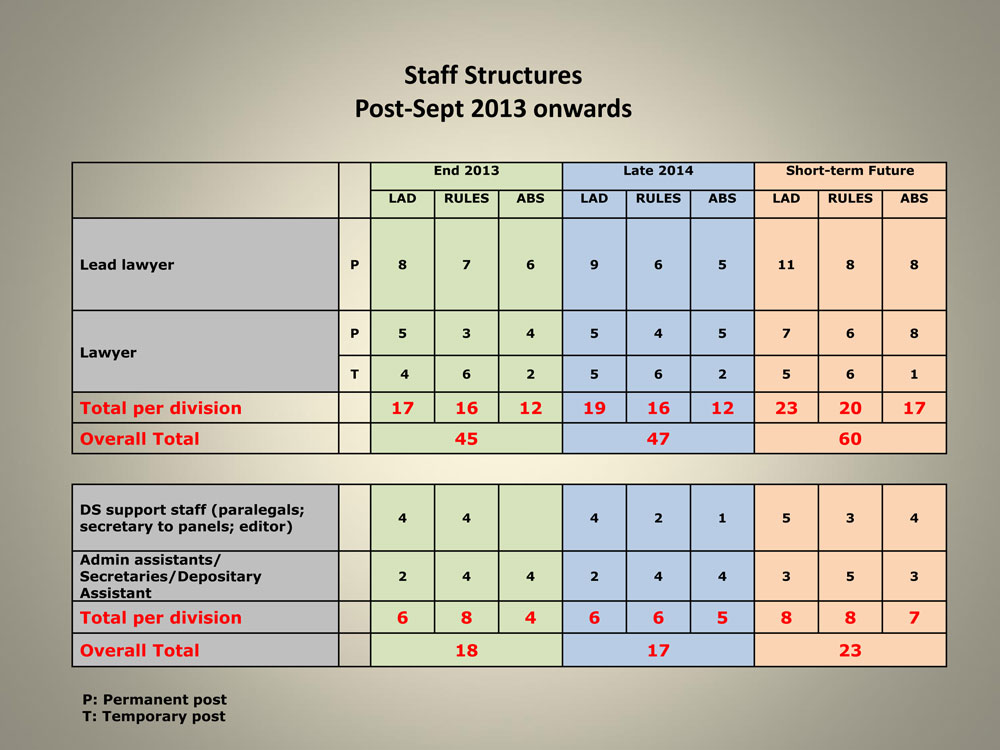 Despite the number of disputes rising to its highest in a decade starting in 2012, this slide shows that in 2013 the Secretariat did not have enough lawyers who could be assigned in new disputes.

This is partly because we had lost a number of trained and experienced lawyers in the preceding few years.

So I took immediate steps to deal with the problems.

I reallocated resources so that the 3 dispute settlement divisions could recruit junior lawyers through temporary contracts for 1 to 2 years, using funds that were available from vacant posts.

A total of 17 temporary contracts have been awarded in the three divisions since February 2013. Part of this reallocation has addressed the need for additional native speakers of Spanish.

And we have achieved some results through staff mobility.

I am envisaging to temporarily assign 2-3 staff members from non-dispute settlement divisions to pending and upcoming disputes as lead lawyers.

These staff members had previously worked on disputes, but they are currently in different divisions. Of course, there is a very limited number of staff with this experience.

The same is true for support staff, which require specific expertise more akin to that of registrars, paralegals and professional editors.

Therefore mobility (in short, moving people from one division to another) is not the silver bullet that some may think it is. We need to be prepared to take some bigger steps.

Simply put, the need for specialised skills means that we will need to hire new staff at both the senior and junior levels.

Although we have been able to attract qualified people through temporary contracts in the recent past, we are unable to retain them without offering more stability and long-term career opportunities. And when they leave, the considerable effort and time that we have invested in training them is completely lost.

So we must find ways to retain the best and the brightest once we have recruited and trained them.

Moreover we must bring new people in at the senior level — and this is where the most acute problem is at the moment. The supply is just not there. Let’s be realistic.

Even if we bring in new people at the senior level, it also takes at least a year to 18 months for them to develop specialized skills and experience necessary to lead a panel or an appeal team.

So this is something that we will address.

This slide shows the changes that I am going to make in order to deal with these issues.

I have recently allocated 15 additional posts to the 3 dispute settlement divisions — 6 at the senior level and 9 at the junior level. Vacancies for these posts will be announced next week.

Of course hiring staff at present is problematic. Members have put very clear limitations on what I can do. And I am not whining.

First, there is the overall cap on the budget.

Second, there is the cap on the proportion of the budget which can be used for personnel.

Of course I must observe both of these caps, and therefore my options are limited.

I am reallocating resources within the organization. When senior posts are vacated elsewhere in the Secretariat, a significant proportion saved there will be reallocated to disputes.

Of course this approach will inevitably have some consequences. It means, for example, that we will have to stop doing some things, or that we will have to do certain things with less. And that perhaps we will also have to outsource even more of our work, including translation.

Clearly there are limits to the sustainability of this approach, which Members will want to consider.

There are some other steps that we can take to alleviate some of the pressure on the system, in addition to those we are taking on staff.

To start, we must address the complexity of disputes. There are precedents for this. For example:

Members could think about taking additional steps in a similar vein in going forward. I am trying to ask you to be helpful!

Members could also consider some more fundamental steps. And this is for you to consider.

Some years ago there was a proposal to increase the number of AB members.

Under the current situation the 7 member AB can handle around 10-12 appeals at most per year. That’s stretching the envelope. And this is with AB Members working almost full-time. This operational cap is thus simply not enough given the level of demand.

If, for example, Members decided to increase the number of members to 9, the maximum per year could be increased by approximately a third.

This could potentially address the bottleneck at the AB stage to some degree. But of course this is entirely in your hands.

We will continue to work hard to address these issues.

But, I think that members need to reflect on the situation that I have outlined today.

I think it is important to consider how the system was designed — and how it has evolved since then.

We thought we had built a sailboat — but now we have discovered that what we have on our hands is an ocean liner.

And of course an ocean liner requires more resources, more fuel and a bigger crew.

So we will need to consider what resources we are prepared to provide if we want to stay afloat.

I am taking concerted action to resolve the challenges before us — but I am working within constraints.

No amount of mobility or invention will adequately resolve our situation definitely.

We need to confront the situation as we find it today — and we need to be honest about what it means if it goes unaddressed.

It is recognized the world over for providing fair, high quality results that respond to both developing and developed country members.

It is faster than most if not all international adjudicative systems operating today, to say nothing of domestic courts the world over.

We need to ensure that this remains the case.  And for this, I invite you to start thinking seriously about the hard options and decisions we will have to face to fix the system.

Finally, I would like to take this opportunity to thank staff members for their very hard work in assisting panels and the Appellate Body Members. The WTO dispute settlement system would not have achieved its current success without their professionalism and dedication.