Good morning — and welcome to the WTO.

We are truly delighted to be hosting the Parliamentary Conference on the World Trade Organization for the third time.

I would like to thank the Inter-Parliamentary Union and the European Parliament for organizing this event.

And I would like to thank you all for your support over the years.

As you know, the WTO is marking its 20th anniversary.  So I think this is an appropriate occasion to acknowledge the contribution that this organization has made, with your support, in terms of global governance and economic well-being.

Today, when the global economy is more interconnected than ever, it is difficult to imagine a world without the WTO.

And of course the system has evolved considerably over these 20 years. We have welcomed 33 new members since 1995, ranging from some of the world’s largest economies — including China and Russia — to some of the least developed. Today our 160 members account for approximately 98% of global trade.

And, with the package we agreed at our 9th Ministerial Conference in Bali in December 2013, we have begun to update the multilateral trade rules.

As parliamentarians you have played a crucial role in delivering all of this. You support us through approving and ratifying what we agree here. You do it through your advocacy for the WTO — and the pressure that you apply to your governments to engage on the key issues. But, most importantly, you do it by connecting the WTO to your constituents. Everything we do here is for their benefit.

That’s why we are aiming to build on our usual dialogue this year by strengthening our Parliamentary Outreach programme, particularly for developing country regions. A number of meetings have already been scheduled in Singapore, Mauritius, Jordan and Morocco to reach out to those respective regions. More will be scheduled in the coming months.

The focus of these meetings will be the implementation of the package of decisions agreed in Bali. But, in a larger sense, we also want to have a frank discussion on the achievements and challenges that the organization faces today.

We are not complacent. We know that we face some real challenges as an organization and I am determined that we should do everything we can to tackle these challenges.

For example, we know that the pace of negotiations remains a particular source of frustration. The bulk of our current trade rules were agreed 20 years ago when the organization was founded. Despite the fact that many of those rules embody basic and perennial principles, the reality is that our legal texts are yet to properly enter the 21st century.

We need to deliver more outcomes, more quickly. We will do everything we can to work with members to make this happen. And, again, your support will be vital.

So let me turn now to some specific areas where we need to work together over the coming months — starting with implementation of things we have already done, and then moving onto the current negotiating agenda.

I think you are all aware of the significance of the Bali package — both in economic terms, and in terms of what it meant for the strength and viability of the WTO.

A major priority now is to deliver what was agreed there. And this work is well underway.

Discussions have started regarding a permanent solution on public stockholding for food security purposes, for example. And we have put a particular focus on taking forward the decisions which are a priority for the Least Developed Countries — the LDCs.

At a high-level meeting two weeks ago we saw some excellent progress on improving market access for services offered by LDCs. Over 25 members indicated services sectors and modes of supply to which they would grant preferential treatment for LDCs. Now we are working to realise these commitments.

And of course we are making good progress in implementing the Trade Facilitation Agreement.

This Agreement will help to simplify and harmonise customs procedures for all WTO members, reducing the time and cost of trade operations worldwide. In this way it has the potential to provide a timely boost to the global economy.

Overall, the benefits have been estimated at up to a trillion US dollars a year — while also creating about 21 million jobs worldwide the vast majority of which would be in developing countries.

The Trade Facilitation Agreement also broke new ground for developing countries in the way it will be put into practice. For the first time there is a mandatory requirement to provide technical assistance for countries that lack the capacity to implement the Agreement.

And so we have created the Trade Facilitation Agreement Facility to help build that capacity in developing countries. Under this facility, developing and least-developed countries can be sure that they will receive the support they need.

But of course the benefits can only be delivered when the Agreement has been ratified. We need two-thirds of the membership to deposit their instruments of acceptance for the agreement to enter into force.

Kenya’s Minister Amina Mohammed has urged members to ensure that this threshold is reached by the time of the 10th Ministerial Conference in Nairobi this December.

So I think that puts the ball in your court.

Your support as parliamentarians is vital to ensure that your domestic processes are completed.

Some members have already done so. And so I urge you all to keep pushing this process forward.

We have a similar task before us in fulfilling the mandate of the Doha Declaration on the TRIPS Agreement and Public Health.

The aim of this declaration was to solve the potential difficulties that members with insufficient or no manufacturing capacity in the pharmaceutical sector can face in making effective use of compulsory licensing to gain access to medicines.

This led to the so-called ’paragraph 6’ system of special compulsory licences to produce and export pharmaceuticals to meet the needs of patients in countries where such medicines cannot be manufactured.

This was done in the form of a waiver in 2003 and subsequently became an amendment — the first amendment to the multilateral agreements in the WTO.

And again, it is high time that it was brought into force.

The UN General Assembly, ECOSOC, the World Health Organisation and UNAIDS have all called for this to happen.

As with trade facilitation, two-thirds of the membership has to confirm acceptance before the amendment comes into force. Around half of our members have already taken this step. They comprise a healthy cross section of the membership, drawn from every region and with all levels of development.

We need 27 more acceptances to trigger entry into force. I am convinced it is an eminently achievable goal to secure these acceptances this year.

So far it has proved to be a very straightforward exercise for most members.

After all, it does not require you to take on any new international obligations — it essentially means that you are prepared to affirm the right of all members to use this legal system if and when they wish to.

To build momentum, I have written to Ministers of all WTO members concerned asking them to consider taking this step.

And again, your help will be vital. We need to complete this process to help increase access to medicines — particularly in Africa.

I therefore urge you to encourage your governments to take the steps which are necessary to complete this process.

So these are things which have already been agreed. But, in addition to implementing these decisions, we have to deliver new negotiated outcomes that will contribute to the strength and stability of the global economy.

We currently have negotiations in a number of areas at the WTO.

Some members are engaged in negotiations on the Environmental Goods Agreement and the expansion of the Information Technology Agreement, for example.

These are significant initiatives, which would bring major economic gains, and would benefit all WTO members.

But of course by far the greatest focus here is on the Doha Development Agenda — the DDA. Negotiations on the DDA have been running since 2001. That is simply far too long.

In Bali, and again in November last year, every single WTO member committed to taking forward this work. And we now have the goal of agreeing, by July this year, a detailed work programme on the remaining DDA issues.

This means that the big, tough issues of agriculture, services, and industrial goods are back on the table — and we know that development issues will be at the heart of this work.

We started an intensive process of negotiations just a few weeks ago, and we have already seen some good progress. While the broad positions have not changed a great deal since last time these issues were discussed, it is clear to me that the tone of the discussion has changed.

Despite the gaps between positions, I sense a real desire from members to overcome them.

I have also heard people express a willingness to entertain new thinking in certain areas.

And, significantly, from my conversations with Ministers, I have a sense that there has been a big increase in the political will behind our work. This is invaluable.

We need to redouble our efforts and complete this work — and we need you to help keep governments engaged, to keep the focus on these negotiations, and to build and maintain the political will which is so essential.

Of course there are other trade initiatives in the world today which often grab the headlines. By and large they are very welcome — and they are all underpinned by the WTO’s multilateral rules. But it is important to remember that they cannot replace the WTO.

There many big ticket items — such as negotiations on trade facilitation or agriculture and fisheries subsidies — which can only be efficiently delivered here.

So we have to demonstrate once again — as we did in Bali — that the WTO can deliver. And I think that we have started this anniversary year with real purpose and momentum.

I hope I have given you a sense today of the continued importance of our work — and of the opportunities that lie ahead.

In addition to implementing the Bali package and the TRIPS amendment, and agreeing the work programme on the DDA by July, there are a series of major challenges and milestones ahead of us:

Positive outcomes in all of these areas would be the best way to mark our 20th anniversary. And, in each case, we look forward to your support and your engagement.

As parliamentarians your involvement is crucial in all of our work — because it is through you that we hear the voices of the people that we are here to serve. And nothing, absolutely nothing, is more important than that.

Thank you for listening. 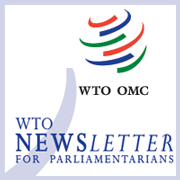