It’s a pleasure to be here for the launch of Connecting to Global Markets.

I have to tell you that I lost some sleep last night reading through the book, and the different countries and different experiences it brings out.

I would like to congratulate all the WTO Chairs who contributed to the book. In my view it represents a great deal of hard intellectual work — and so I hope it will be read far and wide. I will dedicate further time to it — I’m sure of that.

The aim of the WTO Chairs Programme is to build academic capacity in developing countries in order to improve policymaking on trade — and in particular on WTO issues.

For the last four years it has supported curriculum development, research and outreach activities by universities and research institutions

And so it strikes me that this book is a very fitting conclusion to the first phase of the Programme.

It is based on an important premise — which is that in a more globalized economy, where developing countries have emerged (or remerged) as major trading powers, and where new ways of organizing production have become more widespread, the countries that are able to connect to this new trading system will more quickly and more effectively follow the path to growth and economic development.

The authors — the WTO Chairs — were able to clearly identify some of the major challenges their countries face in trying to achieve this connection.

And what’s interesting is the wide variety of challenges identified, such as:

In this way the book testifies to the diversity of developing countries and their trading interests and capabilities. The “developing country” label only tells you part of the story. By showing this diversity it suggests that the old idea of a north-south divide on trade is increasingly inaccurate — the reality is much more complex: we need to look closer if we want to understand the real picture.

Elsewhere, in contrast, other old ideas are found to be valid — for example, the positive relationship between international economic rules and economic development. A number of the Chair’s country studies show that the rules-based system accelerates the adoption of good trade policies.

The book also shows the importance of initiatives such as Aid-for-trade in seizing the benefits on offer.

But perhaps the clearest message here is just how much academics can contribute to policymaking in developing countries.

Academics are in a position to approach issues with a breadth and depth of analysis which is simply not a practical possibility for many others — such as politicians for example.

Academics have space to consider changes in the global economy so they can identify not only today’s challenges and opportunities, but also those of tomorrow. They are not bound by the silos of specific responsibilities which can exist in government — therefore enabling them to take a broader view of holistic issues like economic welfare.

Freedom from day-to-day policy-making means they are better placed than many to take the long view — an essential virtue for those dealing with economic development, which as we all know is not achieved overnight.

And they can assist policymakers by employing — or creating — more precise methods to measure the impacts of their policies and programmes.

To paraphrase Lord Kelvin, who made valuable contributions to numerous fields of science: “If you cannot measure it, you cannot improve it.”

By demonstrating the contribution that the academic community can make to policymaking, this book makes a powerful case for the WTO Chairs Programme itself. It shows the value of building this academic capacity in developing countries, where it can sometimes be in short supply.

We should thank the current WTO Chairs and the members of the Advisory Board for the success of the Programme since its launch in 2010. And I’m delighted that we will be renewing the Programme for another four years. We look forward to supporting another generation of WTO Chairs — and I have no doubt that we will benefit again from their research and insight, as we are benefitting today.

As you know, in December members were able to conclude a multilateral agreement for the first time since the organization was created in 1995.

The Bali package represents an important boost to trade and development around the world.

At last, we are doing what we should be doing: negotiating serious issues and making new rules, which deliver for the benefit of all.

And so it is vital that all members can play their full role in the debate.

Bali was historic for a number of reasons — but, crucially, it put in check the notion that trade negotiations will inevitably end in a north-south divide. I’m pleased that this is also reflected in the book.

Bali changed the ballgame. Developing countries fought for the results just as hard as anyone. The few voices that expressed reservations about the general balance of the agreement and suggested it should be rejected found no significant echo in the developing world.

But of course the work is not done. With success in Bali we have earned the right to work even harder to tackle bigger issues.

We have two very significant tasks before us.

First and foremost, we need to implement the decisions and agreements reached in Bali.

Second, the Bali Declaration instructs us to prepare a clearly defined work program on the remaining Doha Development Agenda issues by the end of 2014.

What we do now will define the future of the WTO — so it is essential that all members have the capacity and support they need to participate fully in the debate.

As with the negotiations leading up to Bali, I will do everything I can to ensure the process is transparent and inclusive.

The better engagement and integration of developing and least-developed countries into the multilateral trading system is vital for their growth and development — but equally I think it is the defining test of whether the system works.

And I see initiatives such as the Chairs Programme as essential steps towards ensuring that we pass that test.

So thank you again for being here. Congratulations to the WTO Chairs and everyone involved in the Programme. Let’s make sure it goes from strength to strength.

Thank you very much. 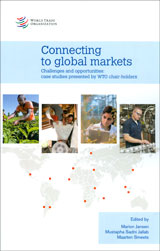