The Aid for Trade initiative was launched precisely for this reason. Aid for Trade is essentially about providing financial and technical assistance to developing countries, especially the LDCs, to help them build up their supply-side capacity and strengthen their trade-related infrastructure to enable them to produce and trade more. Aid for Trade facilitates the mobilization of international resources to address developing countries supply-side constraints and trade-related bottlenecks. Providing assistance for capacity-building is one of the indicators that measure progress towards the achievement of MDG 8, so it is clear that Aid for Trade has a supportive role to play in the realization of the MDGs.

Through the Aid for Trade initiative, the WTO is playing an important role  in partnership with other international organizations  in helping developing countries increase their share of world trade and thereby come closer to fulfilling their development aspirations. The WTO serves as platform for the actions of a large number of actors (international organizations, regional development banks, donors, civil society). It is an example of partnership at work. The WTO spotlights Aid for Trade through periodic meetings of its Committee on Trade and Development and through annual Aid for Trade debates in the WTOs General Council, as well as through Global Reviews on Aid for Trade. These events serve to focus on objectives and measure progress of Aid for Trade.

Commitments on Aid for Trade have increased year-on-year, as shown in Figure 4 (all figures quoted are in constant 2008 prices). In 2007, Aid for Trade increased by 20.6 per cent over the baseline period of 2002-05, with commitments reaching almost US$ 31 billion (up from US$ 25.7 billion). The increase in Aid for Trade commitments for 2008 was even more impressive. Preliminary figures illustrate an increase of 35 per cent, to US$ 41.7 billion. The 2008 Aid for Trade flows are 62 per cent greater than the 2002-05 baseline average.

Figure 4: Aid for Trade increases since 2002-05 baseline period (US$ million)

The distribution by region of Aid for Trade flows shows an increase in resources for all regions relative to the baseline period (see Figure 5). The data for 2008 also indicates that Africa, Asia, Europe and Oceania all witnessed increases in flows over 2007 while the Americas saw a slight decline over this period. Although LDCs and low-income countries continue to receive substantial Aid for Trade, there needs to be a sustained effort to ensure that these countries continue to benefit from an increase in Aid for Trade flows.

Figure 5: Regional distribution of Aid for Trade flows (in per cent)

The Second Global Review of Aid for Trade, held at the WTO in July 2009, highlighted that Aid for Trade has taken root and that WTO members are taking greater ownership of the initiative, in particular developing countries.

One of the highlights of the Review was showcasing Aid for Trade in action. The presentation of the North-South Corridor − a joint initiative of the Common Market for Eastern and Southern Africa, the East African Community and the Southern African Development Community − showed what could be achieved when demand and supply, need and response, and commitment and responsibility unite. This was also true of the Greater Mekong Sub-Region Economic Cooperation Programme, which aims to promote development through closer economic linkages in South East Asia, as well as the Mesoamerican Integration and Development Project which is also designed to promote regional economic integration.

The Review reaffirmed the importance of regular reviews for mobilizing Aid for Trade financing, highlighting the needs of developing countries and showcasing effective implementation. In his closing remarks, the WTO Director-General Pascal Lamy reiterated that Aid for Trade was coherence in global economic policy-making in action. The Review and its outcomes contributed to the development of the Aid for Trade Work Programme for 2010-11. This Programme consolidates the progress achieved and maintains momentum on a number of key areas, including resource mobilization, implementing the initiative especially through regional cooperation, monitoring and ensuring greater involvement by the private sector.

It is critical that the level of Aid for Trade flows is sustained in the future. The impact of the economic crisis on both developed and developing countries, including increasing pressure on public finances, reinforces the need for Aid for Trade flows to be sustained and made more effective in supporting economic growth and alleviating poverty.

In addition, the Aid for Trade initiative has led to a marked increase in the efforts of both donors and recipients to mainstream trade effectively within their development policies, national development and sectoral strategies, regional development plans and donor aid strategies. The responses of partner countries to a joint WTO/OECD questionnaire in 2009 indicates that developing countries are increasingly aware of the importance of this and are taking steps in this direction. Donors have also made greater efforts to align their strategies to the needs and priorities of partner countries.
The Third Global Review of Aid for Trade will be held in 2011, with a focus on evaluating the impact of Aid for Trade on economic growth, trade creation and poverty reduction. Evaluation is a critical component of the Aid for Trade initiative because it is important to illustrate, through both evidence-based assessments and anecdotal feedback, that Aid for Trade is having the necessary impact on development.

Joint WTO/OECD work on the evaluation of Aid for Trade is continuing and will be highlighted at the Third Global Review. This will provide an opportunity for international development partners and policy makers to assess and evaluate how the initiative has been working based on case studies and examples of Aid for Trade on the ground. 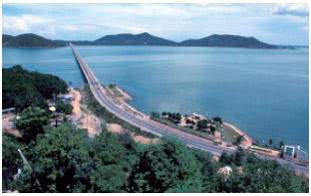 Aid for Trade in action: one of the aims of the Greater Mekong Sub-Region project is to improve transport links between Thailand and its neighbours and to promote development through closer economic linkages.

The WTO is a partner in a capacity-building initiative called the Standards and Trade Development Facility (STDF). This Aid for Trade initiative was established by the Food and Agriculture Organization of the United Nations (FAO), the World Organization for Animal Health (OIE), the World Bank, the World Health Organization (WHO) and the WTO to help developing countries enhance their expertise and capacity to analyse and implement international sanitary and phytosanitary (SPS) standards regarding food safety and animal and plant health measures. The WTO is also involved as a partner in the Enhanced Integrated Framework (EIF), which is specifically targeted at LDCs (see Box 3).

The targets in MDG 8 emphasize the need to cater to the poorest, most disadvantaged and least-developed countries (LDCs) in the multilateral trading system. LDCs, for their part, recognize the importance of trade in supporting economic growth, alleviating poverty and attaining the MDGs.

To use trade as an engine for growth, LDCs need to strengthen their productive capacity. The Enhanced Integrated Framework (EIF) is the mechanism assisting LDCs to do so. Through the EIF partnership, LDCs combine their efforts with those of EIF donors, EIF core agencies (the International Monetary Fund, the International Trade Centre, the United Nations Conference on Trade and Development, the United Nations Development Programme, the World Bank and the WTO) and other development partners to respond to their trade development needs so that they can become full and active beneficiaries of global economic growth. The EIF assists in prioritizing trade-related needs into LDC national development strategies, thereby strengthening donor coordination and dialogue between LDCs and their development partners. The EIF assists LDCs in accessing the required funding through the EIF Trust Fund and through leveraging broader Aid for Trade.

Building on its previous identity as the Integrated Framework, which was launched in 1997, the Enhanced IF is now fully operational. There are currently 47 LDCs involved in the EIF process. In April 2010 the donor commitments to the EIF Trust Fund stood at US$ 182 million while the contributions received have risen to almost US$ 100 million and are still growing. A number of projects for funding from the EIF Trust Fund have been approved and more are in the pipeline.

While some of the trade priorities identified by the LDCs through the EIF process can be funded through the EIF Trust Fund, the vast majority of activities need to be funded by the LDCs development partners through initiatives such as Aid for Trade. The EIF assists LDCs in leveraging Aid for Trade through its assistance in integrating trade into national development plans.

Aid for Trade is having a real impact on the ability of countries to trade. It is one of the key deliverables of the WTO in support of the Millennium Development Goals since the increased emphasis on economic activity and developing effective infrastructure has clear and positive effects on poverty reduction and employment in developing countries. Aid for Trade can help promote export diversification and engender multi-stakeholder participation in determining trade needs and priorities.

Another novel achievement of Aid for Trade has been greater recognition accorded to South-South trade and other forms of cooperation for generating additional funding and capacity-building for developing countries, especially least-developed and low-income countries. It is clear that South-South activities are becoming increasingly important complements to more traditional donor-funded activities. Together with the conclusion of the Doha Round, Aid for Trade forms an important engine in realizing the MDGs.