THE WTO: THE WTO BUILDING

> The WTO building
> Welcome
History
> Works of art
> The Park

The main building, known as the Centre William Rappard, was constructed on an estate which was gradually formed by the union of a number of plots of land between 1755 and 1893. In 1785, construction began on the Villa Rappard, the house that still stands next to the main WTO building and today houses a Montessori school.

In 1921, the Swiss Confederation acquired the estate and offered it to the League of Nations, which designated the site for construction of a headquarters for the International Labour Office.

Both bodies had been created in 1919 with the signing of the Treaty of Versailles, which formally ended World War I.

In 1923, an architectural competition was launched and the commission to design the ILO headquarters was offered to Swiss architect George Epitaux from Lausanne. His design was based on that of classical Florentine villas, with an interior courtyard, a grand entrance and a sweeping staircase off the main reception area. Construction began in 1923 and the building was in-augurated on June 6, 1926. 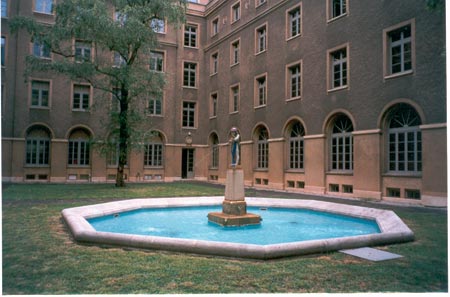 Interior courtyard of the CWR, in the Florentine style

The interior of the building was enhanced by donations from many countries, in-cluding murals in tiles and paint depicting various aspects of labour, sculpted wooden doors, elaborate fountains and exotic trees. Numerous additions followed over the years, including a new wing on the north side of the original building added in 1937, encompassing the current Salle Wyndham White and executive offices. The South Wing was further extended after World War II.

The GATT (General Agreement on Tariffs and Trade) came into being in 1947 as a result of the Bretton Woods Agreement, which also created the World Bank and the International Monetary Fund. The GATT Secretariat was first lodged in the Villas Bocage and Fenêtre, near the Palais des Nations, the home of the United Nations in Geneva. These nineteenth-century villas had been acquired by the League of Nations after a string of illustrious owners and occupiers that included King Louis Phillipe of France, Count Leo Tolstoy (whose aunts owned the Villa Bocage), Don Carlos of Spain and the Archdukes Ferdinand and Maximillian of Austria.

The ILO occupied the Centre William Rappard until April, 1975, when it moved to its new headquarters in Grand Saconnex. It was at this time that the CWR was designated as headquarters for the General Agreement on Tariffs and Trade (GATT), the United Nations High Commissioner for Refugees (UNHCR), and the library of the Graduate Institute of International Studies. The UNHCR has since moved to new quarters closer to the Palais des Nations.

The building was officially named the Centre William Rappard in 1977. William Rappard (1887  1958) was recognized in his time as a leading internationalist, occupying senior positions in the League of Nations and in Swiss diplomacy. He is a co-founder of the Graduate Institute of International Studies, which occupies the former Villa Barton, immediately south of the WTO. There is a bust of Mr Rappard in the reception area of the WTO.

The Uruguay Round of trade negotiations conducted under the aegis of the GATT led to the creation in 1995 of the World Trade Organization. As the responsibilities of the WTO have grown to encompass new areas of work, the organization has gradually expanded to occupy most of the CWR. Delegations from the WTOs Members (see list inside back cover) meet in its historic rooms every day to discuss and negotiate the further development of trade rules and to seek peaceful resolution of trade disputes
The Centre William Rappard is officially owned by the Fondation des immeubles pour les organisations internationales (FIPOI), a foundation established by the State of Geneva to administer buildings occupied by international organizations.

A new conference center was opened in 1998, adjacent to the main building, based on a design conceived by Swiss architect Ugo Brunoni. The classical form of the Greek theatre was the inspiration for the design, which also drew on the natural setting of the surrounding park as the basis for the materials used in its construction.