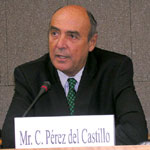 Carlos Pérez del Castillo is currently the Special Advisor on International Trade Negotiations to the President of the Republic of Uruguay. He has held this Cabinet-level position since early March 2004 and headed the Uruguayan delegation to UNCTAD XI in Sao Paolo, Brazil in June 2004 with Ministerial rank.

Pérez del Castillo was the Permanent Representative of Uruguay to the United Nations, World Trade Organization (WTO) and other International Organizations in Geneva, Switzerland, from March 1998 until February 2004.

During this time he chaired most of the top bodies of the WTO, including the General Council, the Dispute Settlement Body, the Council for Trade Related Aspects of Intellectual Property Rights (TRIPS ), the Council for Trade in Goods, the Committee for Regional Trade Agreements and the Working Group for the Accession of Algeria. He was also Vice Chairman of UNCTAD X, spokesman of the G77 and Latin American and Caribbean Group and Member of the UNCTAD Advisory Body from 2001 to 2004.He also chaired the U.N. Diplomatic Committee in 2001-02.

As Chairman of the WTO General Council from 2003 to 2004 Ambassador Carlos Pérez del Castillo oversaw the preparatory process for the Fifth Ministerial Conference of the WTO. His appointment to Chairman of the General Council for this particularly demanding period reflected the need for experience in multilateral trade negotiations and a first-hand understanding of the importance of the development dimension. His appointment was also recognition of the role he played as Friend of the Chair on Implementation Issues during 2000.

Following the setback at Cancún, Pérez del Castillo led WTO Members in an intensive consultative process to inject new momentum into the Doha Development Agenda. The focus of the WTO's working agenda today, in particular the emphasis on making real and substantive progress on the development related issues which remain at the core of the Doha Round, draws extensively on the efforts of Carlos Pérez del Castillo following the Fifth Ministerial Conference. The successful outcome in July built on his action plan and the widely-recognized work he put into establishing a firm basis for renewed progress in the DDA.

Carlos Pérez del Castillo is fluent in all three official languages of the Organization (English, French and Spanish). His wide international experience has equipped him with an understanding of the concerns of WTO Members across the spectrum and with the necessary profile to pursue dialogue at high political levels.

Before taking up his duties in Geneva, Carlos Pérez del Castillo was Vice-Minister for Foreign Affairs of Uruguay from 1995 to 1998. For extended periods during these years he also was Acting Foreign Minister, including on several official visits abroad. In both of these capacities he also acted as Uruguay's Chief Negotiator in MERCOSUR as well as the MERCOSUR spokesperson in the FTAA negotiations. In this post he founded and co-chaired (together with H.E. Theo Ben Gurirab, currently Prime Minister of Namibia) the African-Latin American Institute for strengthening horizontal cooperation.

From 1992 to 1995, prior to taking up his Ministerial duties, Carlos Pérez del Castillo was a Senior Partner and Director-General of CPC Consultora Internacional, an economic consultancy firm based in Montevideo. In that capacity he advised Latin-American private sector companies in building their international strategies and counselled the governments of Chile and Costa Rica and international organizations such as OAS, ECLAC, UNCTAD, ALADI, IDB, ILPES and Mercosur.

From 1985 to 1987 he held the post of Director-General for Economic Affairs at the Ministry of Foreign Affairs of Uruguay and was directly involved in the multilateral process, as well as the national preparation, for the successful launching of the Uruguay Round in Punta del Este in 1986. During this period he acted as Uruguay's top negotiator on agriculture. As Chairman of the Temperate Zone Non-Subsidizing Producing Countries in March 1986, Carlos Pérez del Castillo played a significant role in the creation of the Cairns Group later that year.

In 1982 he was appointed Coordinator of the International Economics Programme of the United Nations, Economic Commission for Latin American and the Caribbean (ECLAC) in Santiago, Chile. He worked very closely with all integration processes in the region.

During 1971 and 1972 Carlos Pérez del Castillo worked in the UNCTAD/GATT International Trade Centre in Geneva on trade promotion activities. From 1973 until 1982 he was a Senior Economics Affairs Officer in the Commodities Division of the United Nations Conference on Trade and Development (UNCTAD). He was appointed Head of the Department of Agricultural Raw Materials and Livestock Sector. He was in charge of several commodity negotiations within the Integrated Programme for Commodities, including the successful negotiation of the International Tropical Timber Agreement and author of a large number of UNCTAD official documents on commodity issues.

He attended the Lycée Français in Montevideo and subsequently studied in Australia, obtaining his Bachelor degree in Economics with distinction from the Australian National University of Canberra and a Diploma in Agricultural Science from Dookie Agricultural College, Victoria, Australia. Following two years as a Field Officer in the Bureau of Agricultural Economics of the Australian Department of Primary Industries, he served as Economic and Agricultural Advisor at the Embassy of Uruguay in Canberra from 1969 to 1971.

Throughout his career, Carlos Pérez del Castillo has written a large number of articles for both international and regional publications and he is a sought-after speaker at international events. Over the past two decades he has lectured on trade policy, international debt, negotiating strategies and integration at several Latin American Universities and he continues to take a keen interest in academic affairs.

In 1990 he was awarded the Dr. Raul Prebisch Award in Economics by the Association of Latin American and Caribbean Economists and he is a Permanent Member of the prestigious Harvard University Trade Group.

Carlos Pérez del Castillo has received the highest decorations from the Governments of Brazil, Chile, France and Venezuela.

Carlos Pérez del Castillo was born in Montevideo on 2 June 1944. He is married to Mariana Philip and has two sons.