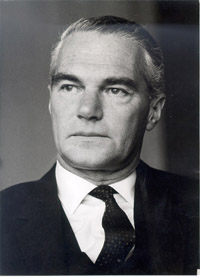 On 6 May 1968, Olivier Long took up his position as Director-General of GATT. He succeeded Mr. Eric Wyndham White who had been Director-General (formerly Executive Secretary) since the General Agreement came into operation in 1948.

1944-46: Delegate of the International Red Cross in London.

1946-1949: Federal Political Department, Berne; then at the Swiss Legation

1960-1966: Head of the Swiss Delegation to the European Free Trade Association.

Mr. Long was Professor at the Graduate Institute of International Studies at Geneva. He was the author of several books and articles on economic affairs and political science.

Mr. Long passed away on 19 March 2003. He was married and had three children.