How many regional trade agreements have been notified to the WTO?

> Consult the Guide to downloading files.

WTO members (as, previously, GATT contracting parties) are bound to notify the regional trade agreements (RTAs) in which they participate. Nearly all of the WTO's Members have notified participation in one or more RTAs (some Members are party to twenty or more). Notifications may also refer to the accession of new parties to an agreement that already exists, e.g. the notification of the accession of Croatia to the European Union Customs Union.

In the period 1948-1994, the GATT received 124 notifications of RTAs (relating to trade in goods), and since the creation of the WTO in 1995, over 400 additional arrangements covering trade in goods or services have been notified.

And many are still being negotiated

Many WTO Members continue to be involved in new RTA negotiations. Like agreements in force, most new negotiations are bilateral. However a recent development has been negotiations among several WTO Members. This includes negotiations in the Asia-Pacific Region for a Trans-Pacific Partnership (TPP) Agreement, currently between 12 parties; in Asia between ASEAN members and six other WTO Members with which ASEAN has agreements in force (the Regional Comprehensive Partnership Agreement, RCEP); the Pacific Alliance in Latin America currently between Chile, Colombia, Mexico and Peru; and the Tripartite Agreement between parties to COMESA, EAC and SADC in Africa. Such plurilateral agreements, once in force, have the potential to reduce the spaghetti bowl of RTAs especially if they supersede existing bilateral agreements and develop common rules (such as for rules of origin) to be applied by all the parties to the agreement.

Evolution of Regional Trade Agreements in the world, 1948-2018

The following Graph shows all RTAs notified to the GATT/WTO (1948-2018), including inactive RTAs, by year of entry into force.

A series of interactive graphs, along with the underlying data, is available from the WTO RTA Database: http://rtais.wto.org/UI/Charts.aspx. 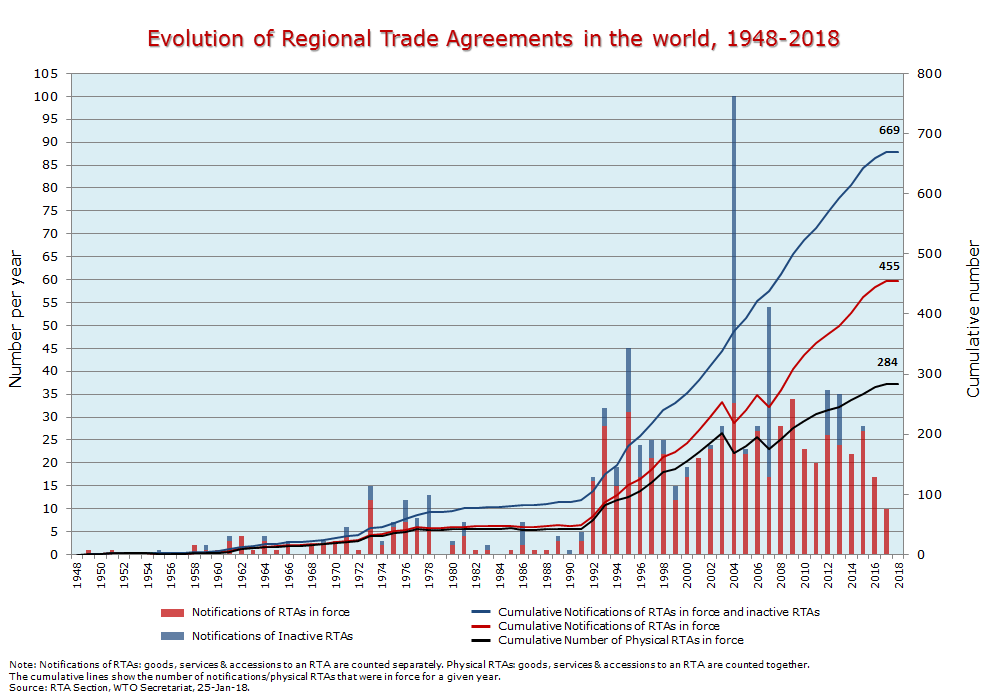