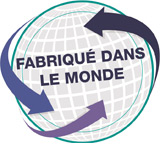 
Trade in value added: what is the country of origin in an interconnected world?

(uniquement en anglais)
“Today’s planet of trade looks very different from when the first rules governing world trade were originally shaped after the Second World War and led to the creation of the GATT. The old division of labour between nations has been radically changed by the recent wave of globalization. Global value chains, or international supply chains, are core to this development and traditional boundaries and distances are collapsing.”(1)

Traditional trade statistics record trade across borders on a gross basis, thus double or multiple-count vertical trade or flows in intermediates. Trade in value added allocates the value added to each step of the supply chain across countries. It allows incorporating the specificity of the new business model on which global manufacturing is based.

To be able to quantify the part of imported inputs in an economy’s exports, different statistical approaches are used.

Examples date back as far as 1998 when a WTO Report described that only 37 per cent of the production value of a typical American car is generated in the US.(2) Others include Apple’s iPod, iPhone or iPad, Mattel’s Barbie doll, or Nokia’s N95.

To trace correctly intermediate consumption of enterprises does require micro data. The linkage of trade and business registers — a new data source — would allow identifying importer and exporters and the throughput, that is, the import content of exports at firm level.(3)

The rise of international transactions in intermediate goods is a direct consequence of the expansion of global supply chains. Trade in intermediate goods can be measured through a breakdown of trade statistics according to the UN classification of Broad Economic Categories (BEC)(4). The WTO estimated the share of intermediate goods in non‑fuel merchandise trade at around 40 per cent in 2008, with wide differences for individual countries.(5)

However, trade statistics remain arbitrary. Product definitions do not always allow distinguishing between intermediate and final use. For example, is packaged software an intermediate or a final product? Another limitation is that BEC only classifies goods. There is no similar classification for services. In the context of offshoring, computer and information services as well as other business services are often used as proxies of intermediate services.

International input-output (II‑O) tables gather national accounts and bilateral trade data on goods and services into a consistent statistical framework. This approach is often referred to as indirect measurement of value added trade and results in estimates, while above-mentioned case studies or analysing trade in intermediate goods are considered a direct measurement.

II-Os tables allow decomposing the value added contained in exports into its foreign and domestic contents.  The import content of exports is also known as vertical specialization (6). The rationale behind vertical specialization is for companies to benefit from comparative and productivity advantages at different stages of the production process. It is clearly associated to trade in inputs, caused by international production chains and the development of outsourcing and offshoring strategies from multinational enterprises. The domestic content of exports is a measure of exports net of imported inputs (7). It corresponds to the accumulation of the value added incorporated by each of the various domestic sectors that contributed to the supply chain.

Industrial supply chains add to the “blurriness” of the country of origin concept as the value of an imported good does not necessarily fully originate from the geographical origin mentioned in custom documents. For example, the table below decomposes the US trade deficit in iPhones with China by the different countries having contributed to its production. Contrary to what is observed through the traditional measure, only a very small fraction of the US shortfall is value added originating from China — the remainder stems from Japan, other Asian countries and developed economies where conception and production of critical components as well as R&D or marketing efforts are located.

Increased vertical integration and the rise of “Global manufacturing” led to significant changes in trade patterns. The boundary between goods and services is blurred and current trade recording systems struggle with the adequate reporting of globalisation phenomena such as goods for processing or intra-firm trade.

Trade in value added however does not only challenge statistical concepts, it also addresses trade policy issues. Who produces for whom or who should be protected against whom is often judged using trade figures recorded gross. Analysing trade in value added terms offers a complementary view as it may shed a different light on trade disputes and anti-dumping measures. Trade policy strategies need to be adapted as recently indicated in a speech by WTO’s Deputy Director General A. Jara…“Old “mercantilist” policies, based on the vision that trade is a competition between “us” and “them”, becomes not only sub-optimal...but also a complete anachronism”.(9)