The SDGs were the focus of discussion during a number of sessions at the three-day Public Forum from 26 to 28 September, the WTO’s flagship outreach event. The Forum provided a unique platform for senior officials, leading global businesspeople, academics and civil society representatives to come together and discuss some of the major trade and development issues of the day.

The SDGs put significant emphasis on the role that trade can play in promoting sustainable development. There are direct references to WTO activities in many of the SDGs, ranging from ensuring food security and sustainable agriculture to conserving marine resources and promoting inclusive and sustainable economic growth.

Agriculture's role in meeting the SDGs was the centre of discussion at a Public Forum session on 27 September organized by the Geneva Office of the African, Caribbean and Pacific Group, the Food and Agriculture Organization (FAO) and the United Nations Industrial Development Organization (UNIDO). Speakers noted that several of the SDGs directly relate to agriculture and that modernizing agricultural production will be key to achieving this. WTO members have already agreed to eliminate export subsidies for agriculture, one of the SDG targets, at their 2015 Nairobi Ministerial Conference.

Mohammad Pervaiz Malik, Pakistan's Minister for Commerce and Textiles, said agricultural trade can contribute a lot towards achieving the SDGs, considering its share in the global economy, but that a "paradigm shift" was needed to make agriculture a dynamic and key contributor to GDP in developing countries.

"Value addition and integration into national, regional and global value chains has now become extremely essential," he declared. "Agribusiness needs an enabling infrastructure which … can be best performed with the partnership of the private sector which can bring much needed investment, and access to knowledge and technology."

Carolyn Rodrigues Birkett, Director of the FAO's UN Liaison Office in Geneva, said agriculture is changing in "unprecedented ways", with growing demand for reliable and consistent food products and corresponding attention paid to sustainable development issues related to this production.

Frank Hartwich, Industrial Development Officer with UNIDO, noted the "stark" increase in trade for high-end processed foods despite market distortions in this sector. The question is how to link small farmers to these global food value chains, he said, adding that farmers need to consider more cooperative arrangements in order to increase production and quality in a sustainable manner.

How sustainable development can be achieved through the adoption of clean technologies, and the role trade can play in facilitating it, was the focus of another Public Forum session on 27 September organized by the World Trade Centre Mumbai and the All India Association of Industries.

John Danilovich, Secretary General of the International Chamber of Commerce (ICC), said the SDGs should also be seen as the BDGs – Business Development Goals. "We clearly see more and more companies committed to placing the UN's SDGs at the heart of their global corporate strategies," he said.  "But for business to play their role, governments must do their part in establishing the right policy environment."

The ICC chief said that one immediate contribution would be the successful conclusion of the Environmental Goods Agreement, an initiative launched in 2014 with the aim of eliminating tariffs on hundreds of environment-related products. "Concluding this agreement must be a first order priority for policymakers," he said, adding that a push should be made to clinch a deal by the WTO's 11th Ministerial Conference next December.

Viviana Muñoz Tellez, Coordinator of  the Development, Innovation and Intellectual Property Programme for the South Centre, said that trade may serve as a channel for clean technology transfer but that many market failures need to be addressed first. This includes stepping up government support to promote clean technology development and providing greater flexibility in trade agreements to facilitate this support.

Efforts to turn the SDGs into reality and create new business opportunities globally was the focus of a 28 September session organized by the World Bank Group, the WTO Trade and Environment Division and the Organisation for Economic Cooperation and Development (OECD).

Aik Hoe Lim, Director of the WTO Trade and Environment Division, said that a growing number of companies, large and small, are tapping into those opportunities by innovating in sustainable goods, services, processes and business models.

However, the impact of business action on the SDGs has not been large enough, nor has it been felt evenly around the world. There is a real risk that some countries may be left behind. Mahmoud Mohieldin, Senior Vice President for the 2030 Development Agenda, United Nations Relations and Partnerships at the World Bank Group, said people have different perceptions of trade and have become suspicious about trade in general, in part due to the lack of policies and supportive measures to minimize negative impact on income distribution and to empower communities.

Bérangère Magarinos-Ruchat, Global Head of Sustainability at the Swiss company Firmenich, said that pioneering business solutions are needed to fulfil the SDGs and their promise of leaving no one behind. She said SDGs have already succeeded in creating a common narrative on the way companies engage with customers and suppliers, taking into account issues related to human rights and climate change. However, greater partnering between governments, international institutions, the private sector and civil society is needed to deliver further results that contribute to effectively achieving the SDGs.

Brendan Edgerton, Circular Economy Manager at the World Business Council for Sustainable Development said sustainability is a good business and it has been so for some time now – a business worth $13 trillion and 380 million jobs by 2030. That is why companies are increasingly focusing on innovation, retaining talent and captivating customers and investors through more SDG-friendly strategies.

Dominic Kailash, Head of Public-Private Partnership and Member of the Executive Committee at the World Economic Forum, mentioned the example of the palm oil industry, where 70 per cent of production is already under sustainable schemes. Producers know that a sustainable approach increases fourfold the productivity of palm oil per-hectare. It is not only about environmental protection and climate change, it also about production, profit and survival, he said. 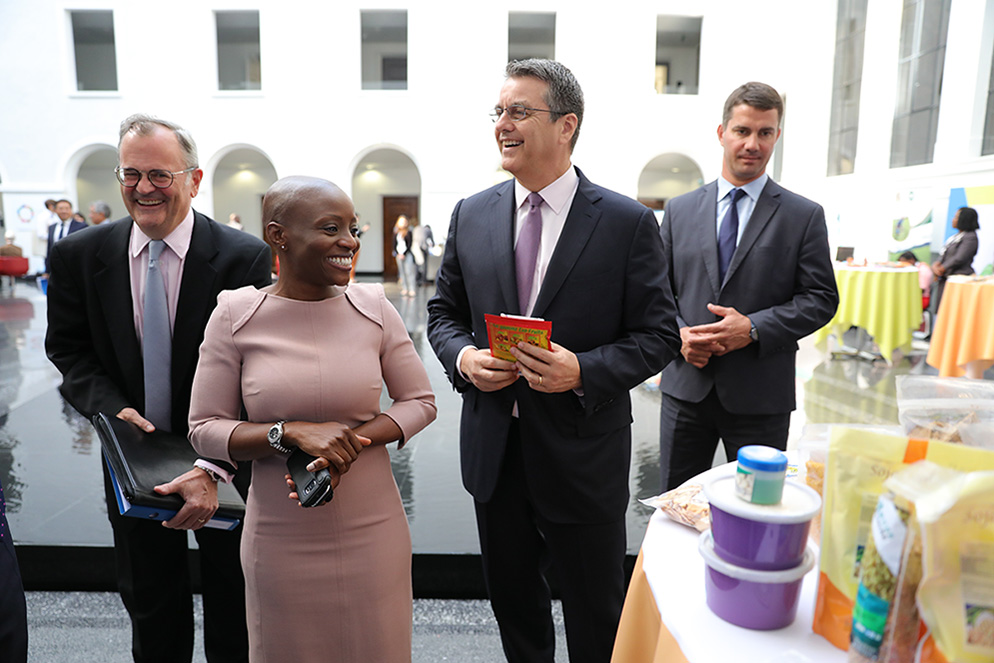