Guy Ryder, Director-General of the International Labour Organization (ILO), said that the WTO has been instrumental in powering the growth and dynamism of the global economy. This has provided the enabling conditions for the ILO to promote the achievement of many of its goals, such as the provision of decent work opportunities and reduction of poverty, he said.

Looking to the future, Mr Ryder said that it is becoming increasingly difficult for trade agreements to be concluded without attention being paid to their social, labour and environmental consequences. He added that it would be a good idea to consider how inter-organizational relations might be modified to address emerging issues.

Céline Charveriat, Executive Director of the Institute for European Environmental Policy, stressed that the world needs to focus on what sort of trade we need to help it recover from where it currently stands and to become climate neutral by 2050.

She said the WTO needs to be a place where there is an equitable sharing of the benefits and risks from “greening” trade. The WTO is the only place that can bring an end to environmentally harmful subsidies, she added.

She highlighted three immediate actions for the WTO to help the world achieve a more sustainable standard of living for all in the wake of COVID-19. First, she hoped that the structured dialogue on trade and environmental sustainability, initiated by 49 WTO members, will bring together all stakeholders and governments to kick start a discussion of greening trade for green recovery. Second, she stressed that the new Director-General should make sustainability her signature issue. Third, WTO members should finalise an agreement on fisheries subsidies.

Joshua Bolten, President and CEO of the US Business Roundtable, said the world economy has changed a lot over the past 25 years, and the WTO needs to evolve with it. He noted in particular the challenges posed by the emergence of China as a dominant player in world trade.

He said: “Only a bold and comprehensive reform agenda can restore the central role of the WTO and prevent its downward spiral into irrelevance. To those of us who believe in the multilateral system in the WTO, we must come together to prove it can meet the challenges of today, and of the future. If we disagree with what has been happening in trade over the past several years, we must demonstrate that the WTO can evolve and deliver.”

Soumaya Keynes, Trade and Globalization Editor of The Economist magazine, shared snippets of an article published in the April 1994 edition of The Economist on the establishment of the WTO and on governments' interaction on trade policy. She stressed that now is an opportunity for all members to learn from the past and think of what they would like to get from the institution. They need to think about what they should put in the system and what responsibility they have to engage on issues such as subsidies, climate change, fisheries subsidies and the pandemic, she said.

Martin Chungong, Secretary-General of the Inter-Parliamentary Union, said that responding to the challenges of the WTO cannot be separated from the efforts to address the challenges facing multilateralism today. He shared proposals from the global parliamentary community focusing on resolving the crisis of the dispute settlement system and harnessing technology and innovation to create sustained growth and development.

He added: “We need to build capacity among institutions including parliaments to make sure they are engaged with the WTO and the rules-based trading system globally.” He also stressed that the correct environment needs to be created to allow women to participate fully in the economy.

Frank Heemskerk, Secretary General of the European Round Table for Industry, said that the WTO has been the backbone of the trading system and is guaranteeing stability not only for the big companies, but for the smaller ones as well.

He said that saving and strengthening the dispute settlement system, dealing with trade distortion and facilitating digital trade are all important elements. More structured cooperation between the WTO, civil society and industry, in the form of an advisory body, would be welcome, he noted. 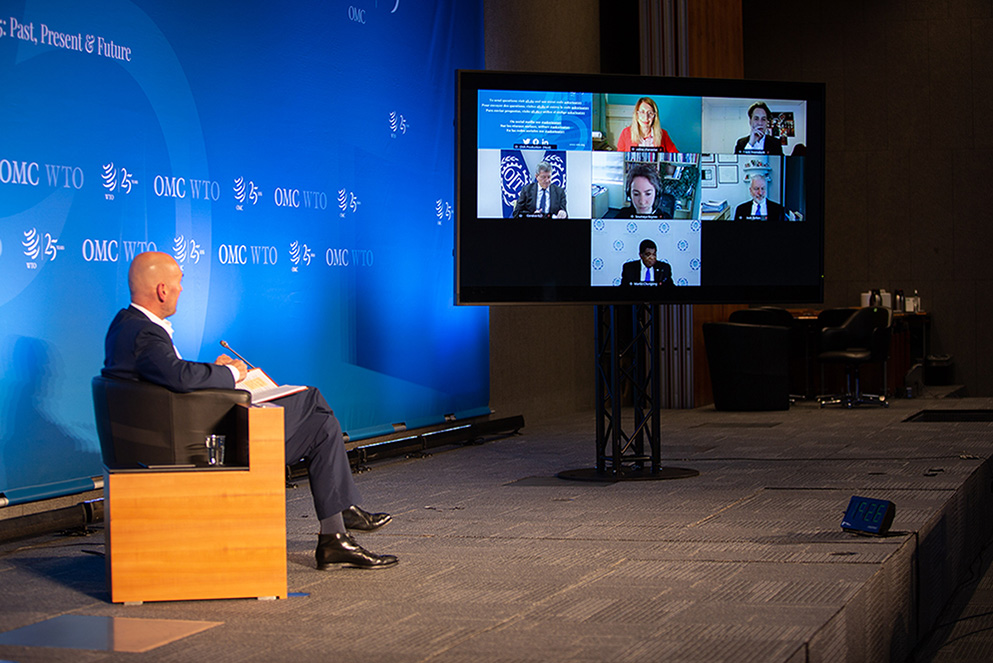