Any discussion about the future must begin with a clear understanding of the past.

On Sunday, on the centenary of the Armistice which brought the First World War to a close, I was proud to take part in the first Paris Peace Forum. It was surely right that the international community marked this solemn date with a renewed pledge to peaceful cooperation between nations, for the good of humankind.

At the commemoration, President Macron spoke of:

The multilateral trading system, like other international bodies, was born out of the conflicts of the early 20th century, with the aim of making this vision a reality.

It was created to advance the cause of co-operation between nations, to preserve peace and stability, and thereby to support growth, jobs and development – the essential conditions for economic wellbeing.

This mission is just as important today as it was back then. Co-operation, under shared rules, through the multilateral system, remains the best way of delivering it.

So let me take a moment to underline the value of what we have today.

The trading system may not be perfect, but it is essential and it has proved very effective.

The WTO now covers around 98% of global trade. It has overseen a historic opening of markets and integration of economies. The negotiations that led to the WTO resulted in global tariff reductions of around 40 per cent.

The system has provided stability and predictability in global trade.

It held firm even during the financial crisis, when, despite negative expectations, there was no outbreak of protectionism.

People often cite the lack of progress in many areas of WTO negotiations. This is valid. We are working to change this, and we have recently made very significant progress.

But if we focus only on that, then we are missing the fundamental point about the value of the system.

It provides the constitution for global trade, establishing shared principles which underpin trading practices around the world. It provides the only global forum for discussion and debate on trade issues. It provides the mechanisms for countries to monitor and review each other's trade policies. And it provides the means to settle disputes when they arise.

Yes, we must keep improving the system and advancing new deals. But let's not forget that the system represents the very foundation on which world trade is built today.

And of course this is brought into sharp focus by the current circumstances.

New tariffs announced so far this year cover hundreds of billions of dollars of imports. Further measures have been proposed.

A continued escalation of tensions would pose real risks.

Our economists have been assessing a variety of possible scenarios to develop this picture, including the impact of a full, global trade war.

By this we mean a breakdown in international trade cooperation, where instead of tariffs being set cooperatively in the WTO, they are set unilaterally.

Under this more mercantilist, nationalist mindset, tariffs would rise sharply.

We would see a reduction of global trade by around 17%.

This would cause a very significant slowdown in GDP growth, and bring major disruptions for workers, firms, and communities as they adjust to this new reality. Potentially millions of workers would need to find new jobs; firms would be looking for new products and markets; and communities for new sources of growth.

Clearly, we can't afford to go down this road.

There is a responsibility on the whole international community to help ease tensions, in the interests of all of our citizens. We need to see more dialogue – both bilaterally and through the WTO.

In fact, this situation is putting a new focus on the multilateral trading system as a place where solutions may be found.

At the root of the current tensions is the argument that the trading system is allowing distortive trade practices to go unchecked. Therefore, the argument goes, the system needs to change to be more responsive to such measures.

Some see this as an opportunity to update the organization and revamp the trading system for a new century. Others have doubts about this emerging discussion and would prefer to focus on completing longstanding work.

Whatever the precise arguments, there's no question that this focus on WTO 'reform' or 'modernization' is growing rapidly. A serious and substantive debate is beginning to emerge, driven by leaders around the world.

Before I go into detail on all of this, I think it's useful at this point to consider the context in which this debate is playing out.

In some senses we are still in the long tail of the crisis of 2008. Many countries are still dealing with its after-effects.

At the same time we are experiencing a new era in the form of the 4th industrial revolution, as new technologies reshape many aspects of our lives and the economy – including the workplace.

These historic events have combined to foster a sense of fear and uncertainty about the future, creating an upsurge in anti-trade and even anti-foreign sentiment.

One important element here is the perception that trade is taking people's jobs and sending them overseas. In reality the driving force behind job losses is innovation and higher productivity enabled by technology. 80% of jobs lost are because of these forces – not because of trade.

Regardless of the causes, it's clear that people feel left behind by economic change.

This requires real action – and much of this will be about domestic policies on education, skills, adjustment support and other labour market reforms, to help workers adapt to the new economic realities.

But no one is going to be helped by choking off trade. Quite the opposite. If we turn our backs on trade and the outside world, in the end everybody loses.

So while members debate WTO reform, we need to keep a proper perspective on all of these issues.

The momentum behind this conversation is growing.

Reform was at the top of the agenda at the G20 trade ministers meeting in Argentina back in September. The ministers issued a communique where they committed to work on ways of improving the WTO to ensure that it can meet "current and future challenges". There was also a very constructive ministerial gathering convened by the Canadian Government in Ottawa in October.

WTO reform has been raised with me in my interactions with a variety of leaders – including President Macron. And no doubt it will be a key issue when we meet at the G20 summit in Buenos Aires in two weeks' time. That meeting will be an important moment.

On the substance, a variety of initiatives and meetings are being prepared, and a range of priorities have been suggested by WTO members, including by the EU, US, China, Japan, Canada and many others. These priorities include, for example:

These are all important issues. But at present there is no common view on whether and how they should be taken forward.

The question for today's conference is "what needs to change?" Only the WTO members can answer this question – and all voices should be heard.

I will be supporting our members at every stage to find ways to facilitate their work and to strengthen the system for the future.

First, I want to stress that even as this debate rages, there is a lot of activity already underway at the WTO – and we must not let this lapse.

For example, members are working hard to meet next year's deadline for an agreement on fisheries subsides. This is a very important piece of work, that would deliver on a key element of the Sustainable Development Goals.

At the same time, we must continue work to advance other important and longstanding issues, such as: agriculture, food security, services and development.

And I would also note the intense activity that we are seeing from the new 'joint initiatives' that groups of members have launched on a range of areas of emerging economic interest. These areas include: e-commerce, investment facilitation, support for small businesses to trade, and the economic empowerment of women.

Time will tell exactly how all this work develops. Some members do not support these joint initiatives, but the proponents are building real momentum. Members themselves will decide what they want to discuss and how they want to do it.

Second, our recent experience has shown that when we have creativity and flexibility progress is possible.

We set about reviving our negotiating work in 2013 and since then members have delivered a run of deals, including:

On this last point it is worth noting that just this week, US legal commitments in the WTO have been modified to reflect their earlier undertaking to abolish their farm export subsidies. This is very welcome.

This series of agreements remains a historic achievement for WTO members. Together, the agreements constitute the biggest reforms in the global trading system in a generation. And they will have a significant economic impact.

In addition, they also provide valuable lessons on the wide range of approaches and flexibilities that are permissible under the rules of the WTO.

The WTO has 164 members – all are different sizes, with different priorities and at different stages of development.

With such a diverse membership I think the only way to advance is by being truly flexible. This may prove an important factor if the reform debate is to bear fruit.

Finally, in all of the current discussions, probably the most urgent issue facing us is the crisis in the dispute settlement system.

The specific issue here is the impasse in appointments to the Appellate Body.

This could eventually threaten the functioning of the whole dispute settlement system as we know it.

There are some signs that members are engaging more deeply here. And proposals are being brought forward. But we need to see a major shift in gears and positions if we are to make progress.

I am redoubling my own efforts in this area and I continue to urge members to do all they can to expedite this discussion and find ways forward.

This is a real systemic risk – and it demands urgent action.

This brings me back to where I started today – we have to remember the importance of the trading system, and we have to work together to strengthen and safeguard it for the future.

The generations who lived through the World Wars came to the clear conclusion that trade, under shared rules, was essential for peace and prosperity around the world.

The evidence shows that they were right.

We must turn this current crisis of multilateralism into an opportunity to save it, and strengthen it for the generations to come. 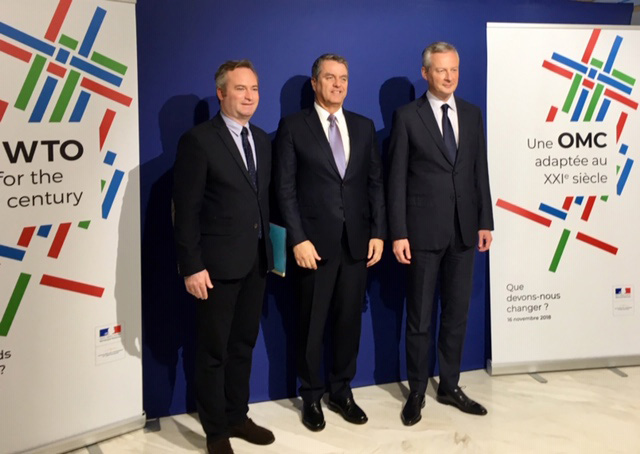