A few days ago, representatives from government, business, academia, and civil society from across all regions descended on Geneva to participate in the largest outreach event of the World Trade Organization (WTO), its annual Public Forum.  Buzzling with lively conversations under the broad umbrella topic of "Towards Sustainable and Inclusive Recovery: Ambition to Action", the house was packed with 3200 participants and 671 speakers engaged in person in over 140 sessions on all things trade. Like in a grand bazaar, there was something for everyone. In my case, I heard five key messages from many stakeholders, loud and clear. The common thread among them is that it is time for action at the WTO. 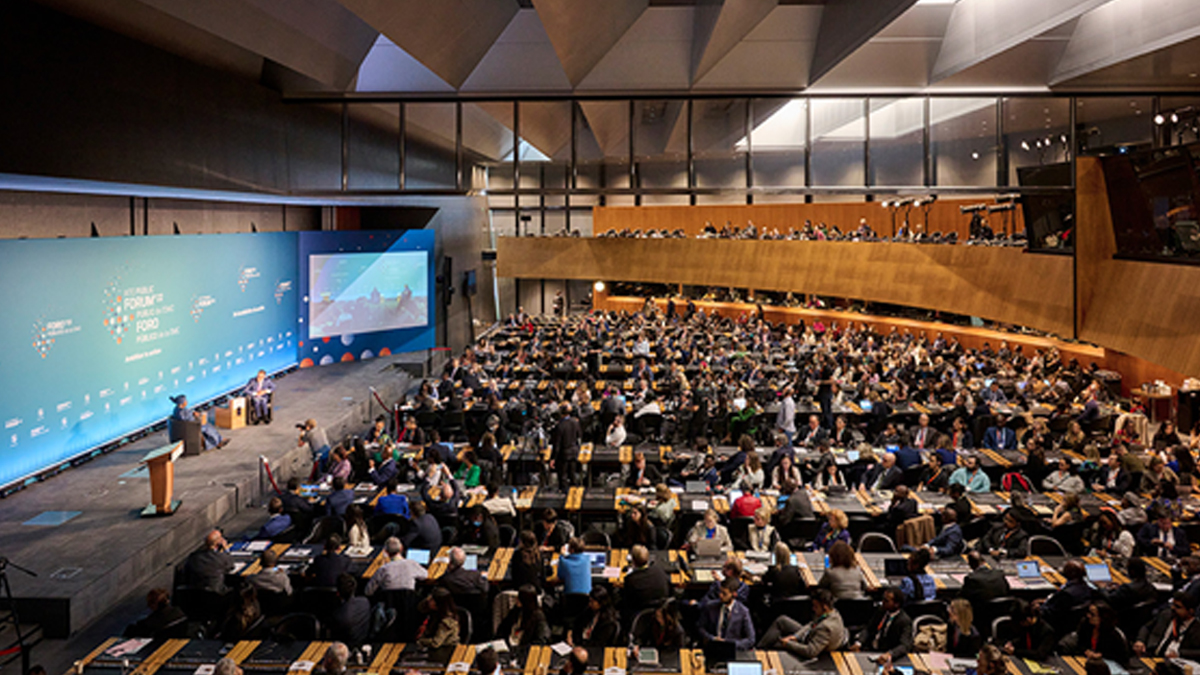 First, the WTO matters. In a world of overlapping and reinforcing crises, from geopolitical rifts and war, threats to food and energy security, high inflation, supply chain disruptions, climate change, and the lingering impacts of the pandemic, the strengths and weaknesses of the global trading system have come into sharp focus. The WTO system has been vital to create and maintain stability and predictability in trade relations, both in normal and in more challenging times. But it has been slow to negotiate new rules, some of its working procedures could be more effective, and its dispute settlement system is no longer functioning as intended.

There were no calls in the Public Forum to ditch the WTO, however. On the contrary, evidence continues to mount that a well-functioning global trade system is not really a choice. It is a necessity. A necessity to manage the risks arising from a vastly more complex trade policy landscape. A necessity to fill the gaps in global governance that are weighing on the ability of countries to respond to pressing collective challenges. And a necessity to help make international trade more resilient, inclusive, and sustainable.

Second, the WTO must be reformed. Governments agree, which is why they launched a WTO reform process at the 12th Ministerial Conference (MC12) last June. There is a strong case for improving the WTO rulebook to respond to the profound shifts in production, consumption and trade that have taken place in the past 30 years. The good news is that change is already happening, as witnessed by the successful conclusion of the multilateral fish subsidies agreement at MC12. It is also taking new forms like in the case of the plurilateral deal on services domestic regulation. The process of reform offers additional opportunities to tackle other areas, like subsidies, where the rules may need to be revised and updated.

WTO reform is also about improving the way in which WTO members work in regular committees and bodies. This work is not flashy and often goes unnoticed, but it is a cornerstone of the global trading system. More and better dialogue and deliberation, based on increased monitoring, data and evidence, can help build a common understanding of both the problems at hand and potential solutions. It can also ease trade frictions.

Dispute settlement is perhaps the toughest part of the reform. There is no shared vision yet where to go, and tensions over trade, technology and security are not making it any easier. There is nevertheless the need for members to sort it out, with great political will and realism.

At the WTO, governments have taken important steps, like temporarily extending a ban on imposing customs duties on electronic transmissions. Importantly, nearly 90 WTO members are negotiating a plurilateral agreement on e-commerce with a set of disciplines to facilitate remote transactions and strengthen trust in digital markets while helping to tackle and prevent the proliferation of digital trade barriers. Digital trade permeates all areas of the WTO. Several committees are dealing with issues at the heart of the digital transformation, from artificial intelligence to cybersecurity and from autonomous vehicles to drones. We need more of that. Greater monitoring of digital trade flows and policies, as well as strengthened analysis, would help trade officials stay on top of a rapidly changing digital trade policy landscape.

Fourth, increasing trade opportunities lies at the heart of the WTO. Evidence is clear on the role of trade in driving growth, productivity increases and improved earnings, which is why the global trading system must put a focus on creating more openings for trade wherever possible. This is especially important for those who remain in the margins of the global economy, including small business, women, and least-developed countries. Greater inclusivity considerations are increasingly present in WTO deliberations, including in groups of WTO members that work together to support the integration of micro, small and medium enterprises and of women in trade.

Unblocking longstanding areas of negotiation that have made little headway over the past decades, like agriculture, could open new possibilities for farmers across the developing world. Moving ahead in newer areas such as digital trade could help reduce trade costs that disproportionately impact smaller players. Taking a renewed look at the potential of services trade, including digitally enabled services, could bring more women and young people into trade. Overall, WTO discussions on trade and development should seek to bring the many to leverage the benefits of trade, in tandem with appropriate domestic policies.

Fifth, the WTO is a tool to tackle climate change.  Climate change is already massively impacting trade patterns and supply chains everywhere. It has led more and more governments and companies to put in place net-zero strategies. Open and predictable trade can help spur the production of high quality and affordable green technologies, facilitate access to those technologies, and mobilize investment at the scale and speed needed to decarbonize the global economy over the next few decades.

The WTO could play a key role, for example, by slashing the barriers that weigh on the diffusion of climate-friendly goods and services to where they are needed, facilitating the emergence of the reverse value chains that underpin the circular economy, and supporting smallholder farmers and small businesses in developing countries so that they can meet increasingly stringent carbon and other sustainability standards in foreign markets. It could also support dialogue and coordination around the use of carbon border adjustment measures to help avoid trade frictions

Throughout the four days of the Public Forum, in every single conversation I held with many participants, I detected a sense of expectation, combined with a remarkable dose of realism. Stakeholders hope that multilateral trade cooperation can be revitalized and reshaped to continue to do in the 21st century what it did in the second half of the 20th century: to promote trade-led growth, prosperity, and development. But they are also clear-eyed about the challenges ahead, and the hard work it will take to bring about meaningful change. Most encouragingly of all, I saw so many people come to the Forum ready to engage and share ideas about how to do so constructively. So, a big thank you to all those who joined us in Geneva -and to those who made it happen.