Managing trade tensions at the WTO

The agenda is packed. From China's transparency obligations pursuant to its accession protocol to the European Union's proposed carbon border adjustment measure, from the United States' subsidies for semiconductors and electric vehicles to India's restrictions on imports of pulses, and more, the topics could not be more timely or more relevant. This is not the program of a flashy event or an academic conference. It is part of the latest meeting of the Council of Trade in Goods (CTG) of the World Trade Organization (WTO), where member governments debate measures adopted by others that may affect their trade. These discussions, which are relatively unknown, take place under the radar, with the WTO providing the sole global platform for trade dialogue at this level of detail. They are also a key element of the WTO's contribution to stability and predictability in an increasingly fractious trade landscape.

In the public arena, much of the discussion around the WTO centers on whether negotiating countries agree to a deal or not or on whether the mechanism for settling disputes is working effectively or not. These are very important issues, for sure. Negotiations are key to updating and adjusting the WTO rulebook to address the challenges of the 21st century. Without a fully functional system for sorting out trade conflicts, enforcement of commitments can be patchy, and members may be reluctant to agree on new rules if they cannot be fully implemented. Both topics are part of ongoing efforts to reform the WTO. But there is another very important function of the organization, which is to provide a forum for dialogue and deliberation to understand the rationale for a particular measure, to clarify its scope, to assess implications, and to discuss its consistency with WTO rules. These discussions, facilitated by notifications, can help members address trade irritants and avoid escalation to the point where they become conflicts (Figure 1). 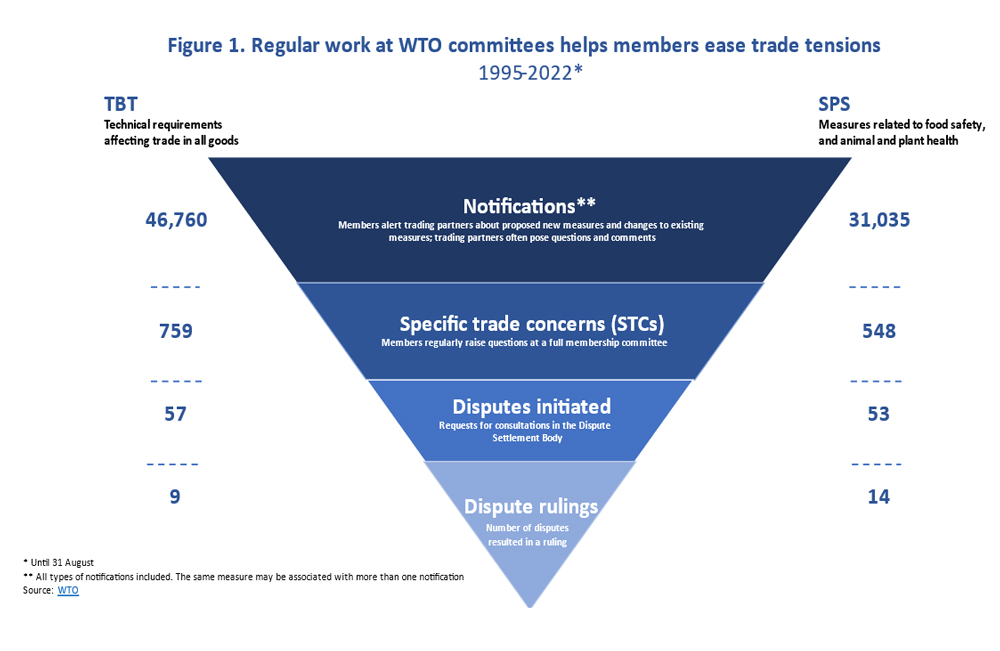 Different WTO bodies have different names for this peer-review process, including “trade concerns” and “questions & answers”, with “specific trade concerns” (STCs) being the most popular. STCs discussed in the WTO regular committees on market access (CMA), sanitary and phytosanitary standards (SPS) and technical barriers to trade (TBT), as well as in the CTG, are part of the bread and butter of the organization. They are initially raised by governments in the technical bodies, many times at the behest of small and large firms, to obtain additional information from a member either as a follow-up to a notification of a particular measure or because they learned about it from another source, or to note that the measure is inconsistent with a WTO rule. Some of these technical discussions can be elevated to a more political debate in the CTG or maybe even to the WTO's top body, the General Council.

Trade concerns may refer to specific products, from 5G equipment to chemical residues to onions and potatoes. They may also involve broader government policies affecting one sector or even all products. In addition to discussion in the committees, bilateral meetings among the countries concerned often precede and follow committee discussions. According to the WTO's Trade Concerns Database, STCs in the CMA, SPS and TBT committees are on the rise, as governments increasingly resort to the mechanism to address alleged trade barriers (Figure 2). In the CTG, trade concerns have more than doubled over the past four years. While the European Union and the United States are the top raising members, evidence from the SPS and TBT Committee show that the mechanism is used by both advanced and developing economies. 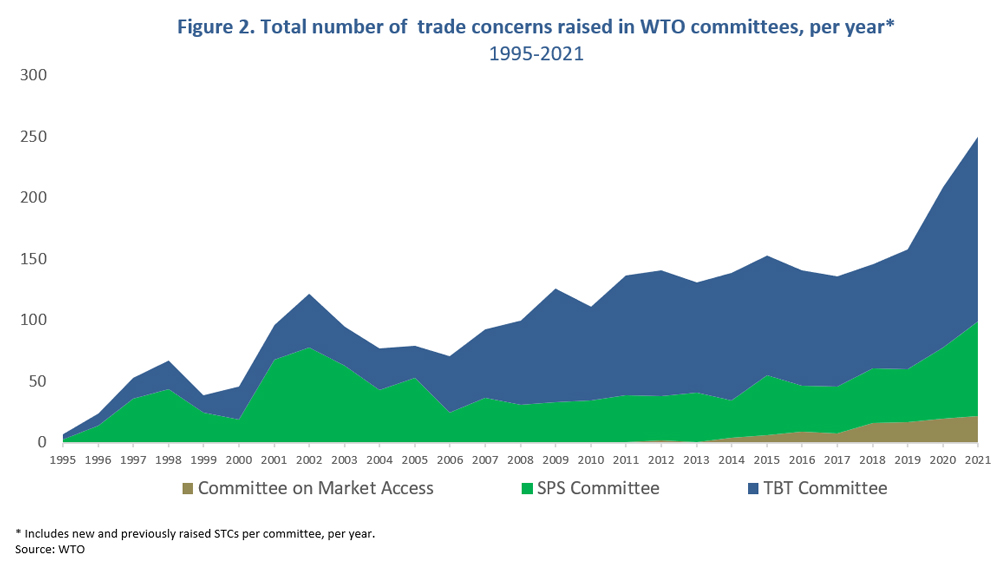 STCs serve a very important role in the trading system. According to a study that looked into the concerns raised in the TBT Committee from 2005 to 2018, the STC mechanism enhances transparency by providing new and more in-depth information than would otherwise have been the case with notifications only; makes governments more accountable for their measures and encourages the adoption of good regulatory practices; and facilitates the resolution of trade concerns non-litigiously, especially by allowing for discussion of measures even before they are formally adopted. In the SPS and TBT areas, these discussions also play an important role in promoting alignment with international standards and best practices. By commenting on each other's regulatory approaches, over time members define good practices that are in line with WTO agreements, thereby providing practical insights and guidance to other members tackling similar regulatory challenges. These debates, while sometimes tense, foster trust and strengthen working relations among government officials through exchanges of information and scientific and technical knowledge, helping to build a learning community within the organization.

Some WTO committees have worked to streamline and improve the management of trade concerns, including through the online submission of STCs with the aim of collaboratively building the agenda of meetings in real time. But both members and outside experts are clear that more can and should be done to strengthen the mechanism and to extend good practices from one committee to others. Ideas include the establishment of time limits for response, focusing exchanges on longstanding STCs to new information only, submission of questions and answers in written format to allow for greater participation from capitals, the introduction of a reporting system on the outcome of STCs to facilitate follow-up of the discussions, and increased capacity building of developing countries to effectively make use of the mechanism, among others. The expansion of the WTO's database to cover the trade concerns debated in all WTO committees could also allow the trade community to have a full overview of the emerging trends and main problems to tackle. Now that the WTO is in reform mode, hopefully governments will seize the opportunity to further improve an effective mechanism for fostering transparency, deepening policy dialogue, and managing commercial tensions.