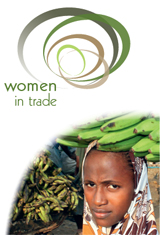 The WTO joins the world in celebrating International Women's Day on 8 March 2013, to honour women around the world and their economic, political and social achievements. Trade can empower women and contribute to reducing poverty and fostering development. More needs to be done to help women benefit from trade.

Trade is a powerful engine to foster growth, generate jobs and reduce poverty. Trade is also a tool to empower women. According to the ILO trade is the most important source of employment among self-employed women of Sub-Saharan Africa providing 60% of non-agricultural self-employment. Facilitating trade by businesswomen can contribute to achieving the Millennium Development Goals (MDGs). Women continue to bear a disproportionate burden of poverty, and empowering women has multiplier effects for economic growth.

But as we celebrate 2013 International Women's Day, it is important to recognise that still too many women face a disproportionate lack of access to the resources and opportunities to trade and the means to leverage them. They often have limited understanding of buyer requirements and limited capacity to meet requirements. Access to credit is often a challenge. Furthermore, the low visibility of women entrepreneurs, particularly in many poorer countries, hinders potential buyers from understanding the issues, benefits, and opportunities to integrate women in their supply chains, as well as from fulfilling existing commitments to increase sourcing from women under supplier diversity programmes.

Public and private sector procurement markets can provide an important avenue through which women entrepreneurs can increase their exports and income through trade.  Despite their significant participation in the economy, according to the World Bank Enterprise Surveys, over 35% of firms worldwide have female participation in ownership; their share of corporate procurement is estimated at less than 1%, and even in the US where there is a government-wide mandated procurement goal of 5%, in 2011 only 3.9 % of contracts were awarded to Women Business Enterprises. More can be done to address the situation.

The WTO's sister agency, the International Trade Centre (ITC) has developed a set of programmes to help women trade more and better. Its “Women and Trade” programme has led to the establishment of a Global Platform for Action on Sourcing from Women Vendors (Global Platform), a framework and support for women entrepreneurs to sell into global supply chains. It has resulted in increased revenues for women-owned businesses and generated new sales worth over US$20 million. The ITC's annual Women Vendors Exhibition and Forum, has enabled women entrepreneurs to participate in face to face meetings with buyers to establish relationships and generate business opportunities. Through the ITC's action, over 2,000 women in specific sectors (coffee in East and West Africa, garments and jewellery in Latin America) have also been linked to export value chains with reported increases in income, expansion of enterprises and job growth. (ITC Women and Trade website)

Also, did you know that:

Source:
Case stories submitted to the WTO for the 3rd Global Review of Aid for Trade in 2011.

Debate: How can trade promote economic opportunities for women?