“The [Cotton Four] proposal has arrived quite late in the preparatory process for the Bali meeting,” Ambassador John Adank of New Zealand said. “As a consequence, relevant members will have to engage very quickly in discussions to explore possible areas of convergence relating to what could be an outcome on cotton at the Bali Ministerial Conference.”

He added that he would work with former Ambassador Steffen Smidt of Denmark — who chairs work on least developed countries in preparation for the Bali meeting — in order to start consultations as soon as possible.

On behalf of the Cotton 4 (Benin, Burkina Faso, Chad and Mali), Chad said an interim agreement is needed in Bali, which would help lay down a clear programme for cotton within the agriculture negotiations in the long term. A number of members welcomed the proposal and noted that work should start immediately to find what can be achieved at the Bali ministerial conference.

The agriculture negotiations’ chair and Chad were speaking in a consultation meeting on development assistance for cotton, often described as unique because it deals with a single commodity, and does so by looking at development, trade and other aspects. Although the official focus is on development assistance, the meeting also receives regular updates on the negotiations on cotton and on agriculture as a whole, and on market conditions.

“The work of members and invited participants in this Director-General’s Consultative Framework Mechanism is a part of the contributions to the overall efforts to reinforce the development dimension of the rules-based multilateral trading system,” said

Deputy Director-General David Shark, who chairs the meetings on behalf of Director-General Roberto Azevêdo, said the consultations among members and other invited participants contributes to efforts to strengthen development through an international trading system that is based on rules. He said Mr Azevêdo will continue to focus on cotton so that it can be a good example for cooperation in the WTO’s work on development.

Members heard that development assistance for cotton has stayed at a good level overall, with more projects completed, and a rise in the proportion of the projects’ value that has been disbursed.

In its latest presentation on the world cotton market the International Cotton Advisory Committee (ICAC) described the current situation and forecasts for world cotton production, with a focus on value chains and employment in the sector.

The value of completed development assistance projects benefiting cotton has increased since the last meeting in June, as has actual spending on current projects, particularly for broader agriculture and infrastructure projects that also benefit cotton, members heard (see table below).

The increase in the value of completed projects is reflected in a slight decline in “active and on-going” projects specifically for cotton, as finished projects have been moved out of the latter category. The $118.6m spending on these active projects is therefore down slightly from $131.7m in June.

However, there has been a large increase in actual spending on projects still being implemented in the broader category of agriculture and infrastructure projects benefiting cotton: currently totalling $2.2bn compared to the $1.6bn reported in June. This means donors have now spent 44% of the amount they have committed for current projects, a large increase over June’s 29%. The 33% spending on current projects specifically for cotton is a slight decline compared to June’s 36%, but this is partly because of the completed projects that have been moved out of this category.

For the cotton assistance projects that have been completed, disbursements were 94% of the $340.6m committed, an unchanged proportion.

The information is compiled in a document that is regularly updated, an “evolving table” now in its 16th version (document WT/CFMC/6/Rev.15 of 21 May 2013).

The meeting heard reports from donors, and from some of the South-South development partners.

He encouraged the donor community and the recipients to follow up on this point to improve the situation.

This time, no capital-based officials known as “focal points” from the Cotton-4 proponents of cotton trade reform were present.

Meanwhile, Chad briefly presented the latest proposal on cotton from the “Cotton Four”; and Ambassador Adank, who chairs the negotiations on agriculture and cotton, reported on consultations he has been holding on a number of issues in the talks as well as his plans for cotton.

Support for the Cotton-4 proposal (full text here) came from India, the G-20 group of developing countries in the agriculture negotiations (Brazil speaking), China, Pakistan, Australia, Uganda and Mozambique. Uganda said a number of other African countries are in the same position as the Cotton-4 and suggested the number in the group’s name could be increased.

The Cotton-4 — Benin, Burkina Faso, Chad and Mali — proposal was first presented by Burkina Faso at the 25 October meeting of the Trade Negotiations Committee. It calls on ministers at the 3–6 December conference in Bali to agree the following:

The proposal also envisages strengthening development assistance for cotton (currently handled in these meetings, which are separate from the negotiations), including linking it with the broader Aid for Trade. And it seeks regular monitoring and other improved information on cotton

Ambassador Adank said he would hold consultations on the proposal and noted that cotton is one of four subjects in a proposal from the least developed countries, also for Bali (document TN/C/W/63 of 31 May 2013).

He and several delegations repeated their observation that ministers included a section on cotton in the “Elements for political guidance” issued at the Geneva Ministerial Conference in December 2011 (paragraph 4 under “Trade and Development”).

In its latest assessment of the cotton market, the International Cotton Advisory Committee (ICAC) included an overview of the world cotton production and a broad perspective on cotton in providing employment.

Currently 27% of world cotton production comes from China and 32% from the Indian subcontinent, the International Cotton Advisory Committee (ICAC) told the meeting. In the next ten years, production in China and United States is expected to decline due to constraints on resources and on economic development, while Africa and Latin America will see increases in their cotton production, out-going ICAC Executive Director Terry Townsend said.

How world cotton production is forecast to change 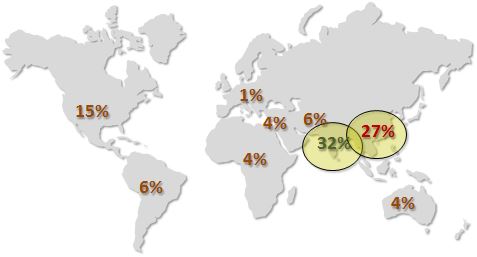 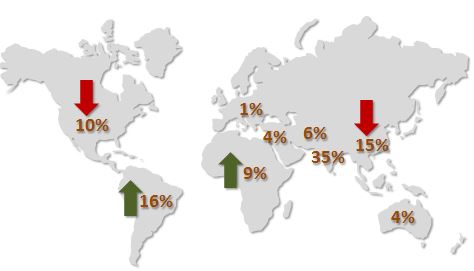 As an indication of the importance of the sector, ICAC also reported that about 250 million people are involved in cotton production, farming to ginning —separating cotton fibres from their seeds — and various stages of production and trading. The sector offers employment opportunities for farmers and workers globally, with about 6 million people employed in various segments along the post-harvest production chain.