Cotton is discussed at the WTO on two tracks: 1) the trade reforms needed to address subsidies and high trade barriers for cotton, and 2) the assistance provided to the cotton sector in developing countries.

These various tracks of discussion have been developed over the years as a response to a series of proposals to address the sector tabled by four African countries — Benin, Burkina Faso, Chad and Mali — known as the Cotton Four or C4.

Negotiations to reform trade in cotton take place in the Committee on Agriculture in Special Session. In addition, dedicated discussions on cotton are held twice a year for WTO members to share information on cotton trade.

Under the December 2015 Nairobi Ministerial Decision on Cotton, developed countries and developing countries in a position to do so have committed to grant, to the extent provided for in their respective preferential trade arrangements, duty-free and quota-free market access for exports of cotton and cotton-related agricultural products from least-developed countries (LDCs). Ministers also agreed that the decision to abolish agricultural export subsidies, as contained in the Nairobi Decision on Export Competition, would be implemented with regard to cotton immediately by developed countries and not later than 1 January 2017 by developing countries. The Nairobi decision also acknowledges the efforts made by some WTO members to reform their domestic cotton policies but emphasizes that more efforts are needed. Finally, ministers also agreed in Nairobi to extend the transparency and monitoring process of trade in cotton initiated at the Bali Ministerial Conference.

Dedicated discussions on cotton are held in the context of the Committee on Agriculture in Special Session. They rely on factual information compiled by the WTO Secretariat from notifications and other information provided by WTO members. The discussions do not constitute a negotiation process but are important in complementing negotiations on this topic.

These dedicated discussions are an outcome of the December 2013 Bali Ministerial Conference, where ministers agreed “to enhance transparency and monitoring in relation to the trade-related aspects of cotton” They also decided “to hold a dedicated discussion on a bi-annual basis in the context of the Committee on Agriculture in Special Session to examine relevant trade-related developments across the three pillars of Market Access, Domestic Support and Export Competition in relation to cotton”.

In the December 2015 Nairobi Ministerial decision on cotton, WTO members committed to continue holding dedicated discussions on cotton on a biannual basis and to monitor the implementation of the decision.

Search Documents Online
Documents on the Cotton Sub-committee use the code TN/AG/SCC/*.
These links open a new window: allow a moment for the results to appear.

Discussions on the development aspects of cotton take place twice a year in a forum known as the “Director General’s Consultative Framework Mechanism on Cotton”. The main purpose of these discussions is to track developments and exchange information on development assistance provided to developing countries. This is recorded through the so-called “Evolving Table on Cotton”. Members are briefed in these meetings on the latest developments in the negotiations and the latest market conditions. The 2013 Bali Ministerial Conference and the 2015 Nairobi Decision on Cotton underscored the importance that Members attach to the development assistance aspects of cotton.. Deputy Director-General Jean-Marie Paugam currently chairs these discussions on behalf of the Director-General.

Search Documents Online
Documents on the Director-Generals Consultative Framework Mechanism on Cotton use the code WT/CFMC/*
These links open a new window: allow a moment for the results to appear.

Cotton has been discussed at the WTO since the Cotton Four’s 2003 Sectoral Initiative on Cotton, and the 1 August 2004 General Council decision — sometimes called the “July 2004 Package” — covering all subjects in the WTO negotiations. The decision says that cotton will be addressed “ambitiously, expeditiously and specifically” within the agriculture negotiations.

Cotton has been an important topic in the agriculture negotiations to remove trade barriers and curb subsidies. The draft texts circulated by the chairperson of the agriculture talks between 2006 and 2008 contained specific provisions on cotton.

In the concluding statement of the December 2011 Ministerial Conference, ministers confirmed their commitment to on-going dialogue and engagement to address cotton “ambitiously, expeditiously and specifically”, within the agriculture negotiations.

The December 2013 Bali Ministerial Conference reaffirmed previous commitments, particularly from the 2004 General Council decision, the 2005 Hong Kong Ministerial Declaration and the commitment of the 2011 Geneva WTO Ministerial Conference. It undertook to enhance transparency and monitoring in relation to the trade-related aspects of cotton, through bi-annual dedicated discussions.

Introduction to the cotton initiative.

NEW!
Help us to improve the portal

Impacts of the COVID-19 pandemic on cotton and its value chains:the case of the C-4 and other LDCs 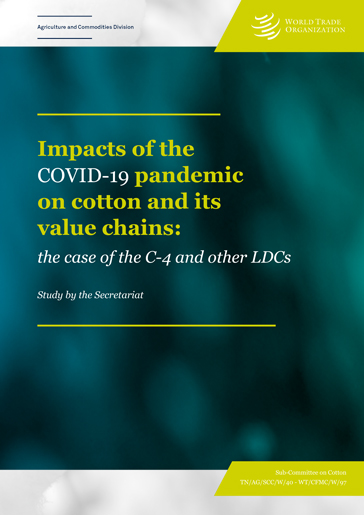 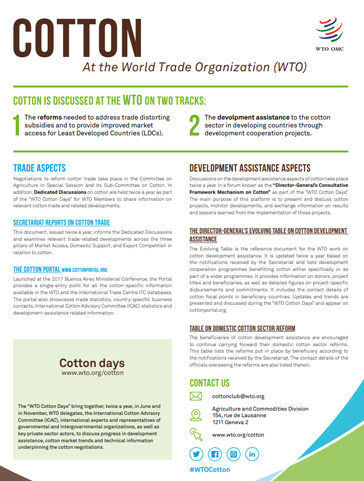