They also asked questions and expressed concerns about some countries’ import licensing regimes for specific products: Saint Lucia for poultry and pork, Ukraine for coke and coal, India and Thailand for marble and similar stone, India for boric acid, Thailand for nitrocellulose and Indonesia for mobile phones and other information technology products, garments and textiles, and new licences for imports distinguished by production and distribution.

Several of these issues have been raised in previous meetings. (Some details are below.)

The committee, which meets twice a year, deals with an issue that is receiving more attention in the current economic climate. Import licensing has been identified in WTO monitoring reports on recent trade developments as one of four main measures that governments have been introducing, which could restrict or potentially restrict or distort trade — the other three are trade remedy actions (safeguards, anti-dumping actions, or duties to countervail subsidies), tariff increases and customs controls.

Since the WTO was set up in 1995 and up to this meeting, members have brought 39 legal disputes against each other citing the Import Licensing Agreement, the two most recent sets of cases involving measures that have been raised in the committee (the policies of Argentina and Indonesia).

Transparency. Of equal importance are the impact on trade of the import licensing measures themselves, and whether information on the licensing is available and understandable. Lack of information can also affect trade as well as other countries’ ability to monitor and comment on the measures.

Chairperson Pierre-Emmanuel Brusselmans (Belgium) reported to this meeting on informal consultations aimed at streamlining an annual questionnaire on import licensing procedures (under Art.7.3) to encourage members keep up-to-date in the information they provide and to improve the quality of the information. The consultations will continue.

A Secretariat document (G/LIC/24), adopted by the Committee in October 2012, shows that although all members (currently 159) are required to fill in the questionnaire, a large number regularly fail to do so. In 2011 only 43 members did (counting the EU as one), for example. 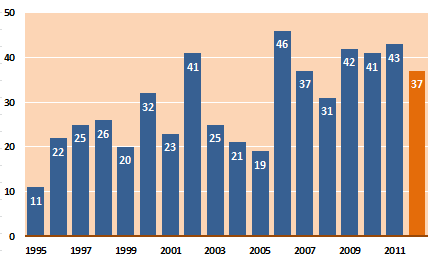 Background: Import licences are permits granted before a product is imported. The administrative procedures for obtaining the licences should be simple, neutral, equitable and transparent. Where possible they should be given automatically and quickly, and even if they are non-automatic they should not obstruct trade unnecessarily.

Transparency is largely achieved through information supplied in three types of notifications, and questions and answers circulated in writing, some of these discussed in the committee’s meetings. The committee also discusses any other issues arising from the Import Licensing Agreement’s implementation.

Altogether 22 notifications were received since the last meeting in October 2012, including 10 as responses to the annual questionnaire.

In the questions and answers in the meeting, members commented that the measures or procedures that are causing concern for them might not comply with the agreement, that no information has been supplied, or that the procedures are difficult to understand — “multi-layered and opaque” as one member put it — so that traders do not know how to access the markets.

These are some of the issues raised:

Russia was asked a number of questions by Canada, the EU, Japan and the US (document G/LIC/Q/RUS/1) about its various laws and regulations, and specifically why Russia failed to meet the 22 November 2013 deadline — 90 days after it joined the WTO — for replying to the questionnaire on licensing procedures. Sharing the concerns were Norway, Switzerland and Australia.

Although members sympathised with the large amount of work required in compiling the information for the questionnaire and to reply to their more specific questions, they urged Russia to respond as soon as possible.

Russia clarified some points — it explained that the regime applied to alcoholic beverages, drugs and drug precursors, toxics, medicines and radio-electronics — and said delays were caused by an internal reorganization.

Viet Nam’s licensing regime. The US, supported by the EU, welcomed Viet Nam’s decision to temporarily suspend some import regulations applied to “a number of goods”, but it regretted that Viet Nam had failed to provide the complete list of products, as required by the Import Licensing Agreement. It complained that six years after Viet Nam became a member, its import licensing regime remains unclear. Viet Nam said it would provide information about the product affected by import licensing and would work with members. (See document G/LIC/Q/VNM/4)

Indonesia was questioned about a range of import licensing measures, including a series of new and revised rules, one regulation affecting seven groups of goods: food and beverages, traditional medicine and food supplements, cosmetics, ready-to-wear clothes, electronics, footwear and children’s toys and another affecting mobile phones and other information technology products. The US and EU, supported by Japan and Rep. Korea, urged Indonesia to notify the measures, which they said restrict trade. (See documents G/LIC/Q/IDN/24 and G/LIC/Q/IDN/25)

Indonesia said it was still waiting for more detailed replies from Jakarta but said the measures were justified for various reasons including compliance with technical regulations, human health and food safety. It acknowledged that the measures had caused some delays but efforts were being made to speed up the procedures.

Brazil was asked by Switzerland about its “RADAR” import authorization system which has the objective to prevent fraud by “ghost companies” in Brazil. (See document G/LIC/Q/BRA/16). Brazil said it would circulate its replies in writing.

Other questions raised in the meeting about members’ import licensing procedures were: