In his welcoming speech to the Conference, Kenyan President Uhuru Kenyatta noted that 2015 has been a year “in which we displayed unparalleled cooperation in agreeing on a number of approaches to some of the most pressing problems facing humanity.” The adoption in September of the 2030 Agenda for Sustainable Development and the conclusion in Paris on 12 December of an historic agreement to address climate change have demonstrated a spirit of achievement which should inspire negotiators in Nairobi, he said.

“My earnest encouragement to all negotiating teams represented here today is to seize this moment, reach for a mutually beneficial compromise, and allow yourselves no result except success,” President Kenyatta declared.

WTO Director-General Roberto Azevêdo urged WTO members to make every effort to secure agreements that will benefit the organization's members, and least-developed countries (LDCs) in particular. “We have seen the power of the world acting as one,” DG Azevêdo said in reference to the climate agreement in Paris. “We should be inspired by that breakthrough here in Nairobi. We should be inspired to lift our sights — to reach further — to aim higher and use trade for the common good,” he declared.

The Director-General said Kenya's commitment to the Nairobi Conference “has been total” and “mirrors their commitment to trade itself as a force for growth and development. Kenya has set the stage,” he added. “Now it is time for us to deliver.” His full speech is available here.

WTO members will be seeking to secure “deliverables” during their four-day meeting in areas such as agriculture, transparency measures, steps on special and differential treatment for developing countries and LDCs, and some other specific issues for LDCs.

Kenya is hosting the first WTO ministerial conference on African soil. The meeting comes more than 20 years after the conclusion of the Marrakesh Agreement in Morocco which led to the creation of the WTO in January 1995. WTO delegates were welcomed by a colourful opening ceremony which included traditional songs and dances by local performers, demonstrating the warm tradition of “karibuni” (welcome) typical of Kenya and the African continent.

President Kenyatta stressed the importance of the WTO and trade for Africa in promoting economic growth and development. “A global trade system that allows us to seize opportunities is a fundamental part of our drive to solve challenges such as poverty, insecurity and environmental destruction,” he declared.

President Kenyatta and the Director-General were joined at the opening ceremony by President Ellen Johnson Sirleaf of Liberia, whose country will formally conclude negotiations on accession to the WTO on 16 December, and Kenya’s Cabinet Secretary for Foreign Affairs and International Trade and Chair of the Conference, Ms Amina Mohamed, who said the world needs a message that the WTO can deliver and remains relevant.

The centrality of the WTO to international trade relations “cannot be substituted”, declared Ms Mohamed. She urged delegations to compromise in order to secure a successful Nairobi deal, noting that apart from a weak global economy, WTO members are faced with a risk of economic fragmentation through preferential trade agreements which, while useful complements, cannot replace the multilateral trading system.

Ms Mohamed will lead the negotiating process on a Nairobi package in close cooperation with the Director-General and has asked several ministers to assist her in this process as “facilitators” on specific issues. The plenary session of the Conference formally kicks off on 16 December with ministers from the WTO's 162 members given the opportunity to deliver prepared statements. 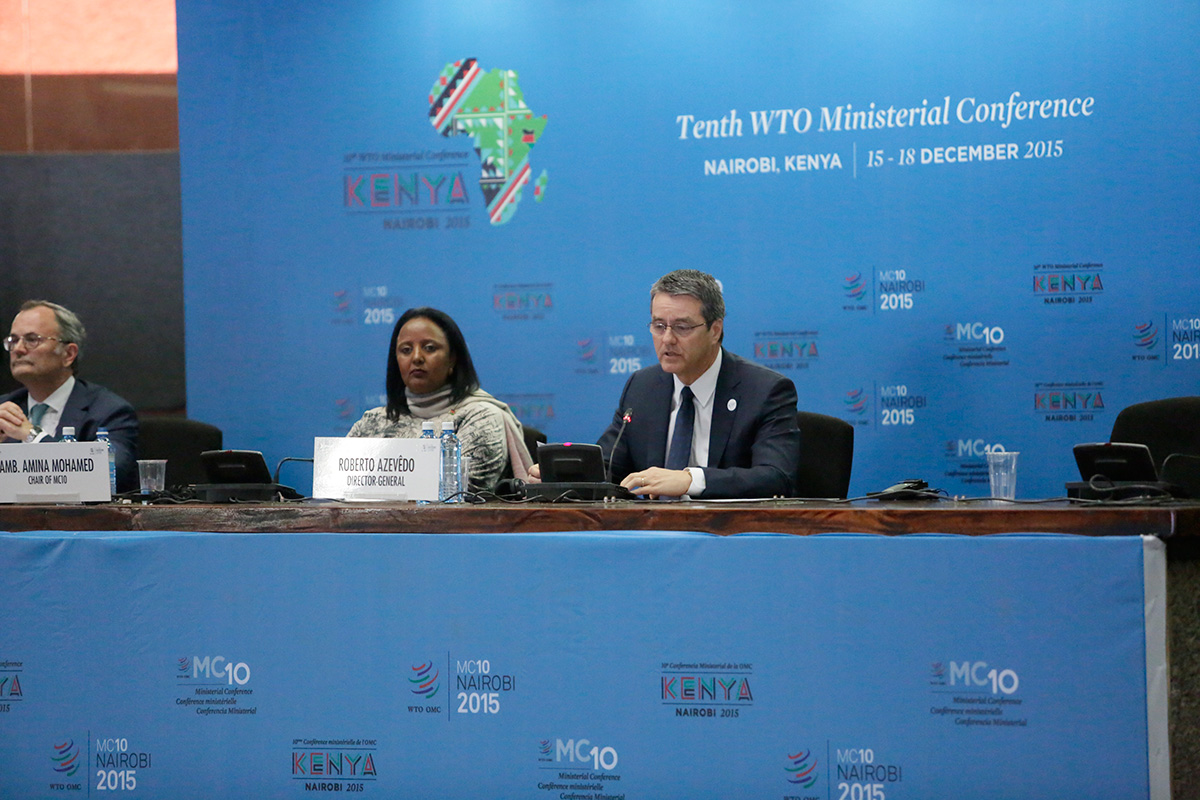