Rwanda, Oman, Chad and Jordan submitted their instruments of acceptance to WTO Director-General Roberto Azevêdo, bringing the total number of ratifications over the required threshold of 110. The entry into force of this agreement, which seeks to expedite the movement, release and clearance of goods across borders, launches a new phase for trade facilitation reforms all over the world and creates a significant boost for commerce and the multilateral trading system as a whole.

Full implementation of the TFA is forecast to slash members' trade costs by an average of 14.3 per cent, with developing countries having the most to gain, according to a 2015 study carried out by WTO economists. The TFA is also likely to reduce the time needed to import goods by over a day and a half and to export goods by almost two days, representing a reduction of 47 per cent and 91 per cent respectively over the current average.

Implementing the TFA is also expected to help new firms export for the first time. Moreover, once the TFA is fully implemented, developing countries are predicted to increase the number of new products exported by as much as 20 per cent, with least developed countries (LDCs) likely to see an increase of up to 35 per cent, according to the WTO study.

DG Azevêdo welcomed the TFA's entry into force, noting that the Agreement represents a landmark for trade reform. He said:

“This is fantastic news for at least two reasons. First, it shows members' commitment to the multilateral trading system and that they are following through on the promises made in Bali. Second, it means we can now start implementing the Agreement, helping to cut trade costs around the world. It also means we can kick start technical assistance work to help poorer countries with implementation.

“This would boost global trade by up to 1 trillion dollars each year, with the biggest gains being felt in the poorest countries. The impact will be bigger than the elimination of all existing tariffs around the world.

“But this is not the end of the road. The real work is just beginning. This is the biggest reform of global trade in a generation. It can make a big difference for growth and development around the world. Now, working together, we have the responsibility to implement the Agreement to make those benefits a reality.”

The Agreement is unique in that it allows developing and least-developed countries to set their own timetables for implementing the TFA depending on their capacities to do so. A Trade Facilitation Agreement Facility (TFAF) was created at the request of developing and least-developed countries to help ensure they receive the assistance needed to reap the full benefits of the TFA and to support the ultimate goal of full implementation of the new agreement by all members. Further information on TFAF is available at www.TFAFacility.org.

Developed countries have committed to immediately implement the Agreement, which sets out a broad series of trade facilitation reforms. Spread out over 12 articles, the TFA prescribes many measures to improve transparency and predictability of trading across borders and to create a less discriminatory business environment. The TFA's provisions include improvements to the availability and publication of information about cross-border procedures and practices, improved appeal rights for traders, reduced fees and formalities connected with the import/export of goods, faster clearance procedures and enhanced conditions for freedom of transit for goods. The Agreement also contains measures for effective cooperation between customs and other authorities on trade facilitation and customs compliance issues.

Developing countries, in comparison, will immediately apply only the TFA provisions they have designated as “Category A” commitments. For the other provisions of the Agreement, they must indicate when these will be implemented and what capacity building support is needed to help them implement these provisions, known as Category B and C commitments. These can be implemented at a later date with least-developed countries given more time to notify these commitments. So far, notifications of Category A commitments have already been provided by 90 WTO members.

The acceptance process involves WTO members ratifying a Protocol of Amendment to insert the TFA into Annex 1A of the WTO Agreement. Members who have not done this are still required to do so.

More information on the WTO and trade facilitation is available at www.wto.org/tradefacilitation.
Photos 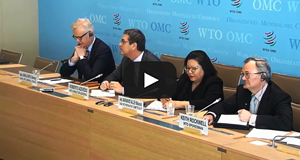