“Trade and economic development is clearly the most effective way for countries to create investment and jobs," said Greg Hands, Minister of State for Trade Policy at the UK's Department for International Trade. "I’m delighted that the UK’s generous support to the Enhanced Integrated Framework will help the world’s poorest countries trade out of poverty.”

WTO Director-General Roberto Azevêdo cited EIF’s progress with helping LDCs improve production and create jobs by producing spices, mangoes, honey, textiles and other products. Several of EIF’s partner countries, which are all in Africa, Asia and the Pacific, have seen a growth in services, such as tourism and information technology. Since 2008, when EIF was created, 51 countries have benefitted from the programme’s interventions; in 2016 alone, EIF supported 189 micro, small and medium-sized enterprises in LDCs around the world.

“The EIF does vital work and has made a real impact on the ground,” the WTO Director-General said. “But we are starting from a low base here. There is still a huge amount to be done. We are particularly grateful for the UK's commitment at this time. We see it as recognition that EIF and the countries it partners with are indeed on the right path."

In the face of a US $93 billion trade deficit — much of it due to a drop in commodity prices — trade officials from some of the world's poorest nations joined donor governments at the Ministerial Conference on 12 December in calling for greater support for connecting the least developed economies to export markets.

“Least developed countries account for 13 per cent of the world’s population, but engage in less than 1 per cent of global trade,” said Pan Sorasak, Minister of Commerce, Royal Government of Cambodia, speaking at a press briefing. “We have a long way to go, but we have evidence that trade can serve as an engine for developing sustainably. It is time to invest in this promise of a better life for our poorest and most vulnerable citizens.”

The LDCs face considerable challenges. The trade gap in 2016 stood at US$ 92.9 billion — a nine-fold increase since 2005, and the LDCs’ share of the global market contracted by 6 per cent last year, mostly due to a drop in the price of fuels and mining products, according to DG Azevêdo.

EIF Executive Director Ratnakar Adhikari said the funding commitments and pledges made at the Ministerial Conference and in the coming year will help LDCs ready themselves for paradigm shifts in the global economic system, including the growing trend in e-commerce. EIF’s work so far has provided the world with success stories, Mr Adhikari added. “But this does not mean that the work is done. Rather, it is a reminder of how important this work is — and how much more focus it deserves.”

EIF is funded by 24 donor countries, whose contributions are administrated by the EIF Trust Fund. Since 2008, EIF has invested more than US$ 220 million to help LDCs strengthen their trade capacities. In addition to the UK funding announced on 11 December, EIF will secure an additional US$ 160 million to help 47 LDCs and four recently graduated countries reach their export goals.

“We will use all tools available to promote growth, development, job creation and inclusivity," DG Azevêdo said. "Fostering this greater inclusivity is undoubtedly one of the most pressing challenges of our age. The solutions are not always evident. But we cannot shy away from this discussion and we cannot make believe it does not exist.” His full speech is available here.

EIF brings together partners and resources to support LDCs in using trade for poverty reduction, inclusive growth and sustainable development. The EIF is a global partnership between the LDCs, donors and international agencies, including the WTO, underpinned by a multi-donor trust fund, which provides financial and technical support to build trade capacity in 47 LDCs and four graduated countries. Further information is available here. 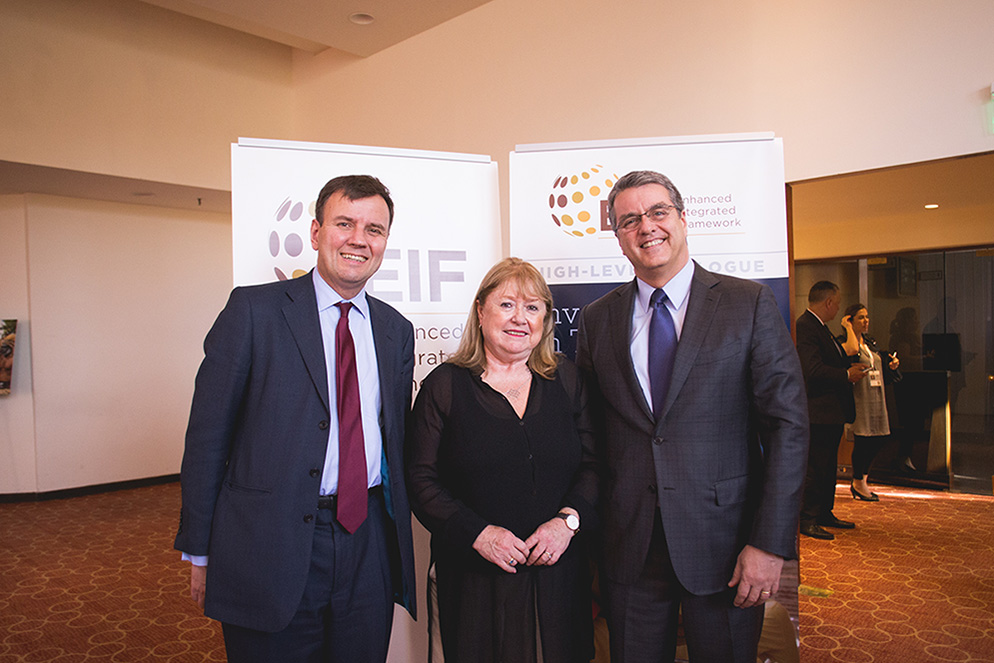