Launched as a sub-group of the larger g7+, the g7+ WTO Accessions Group aims to facilitate the integration of post-conflict and fragile economies into the multilateral trading system through WTO accession-related reforms, including the establishment of credible economic and trade policy frameworks and institutions, and the promotion of transparency and good governance. It also aims to support the efforts of the WTO acceding governments in the Group, including through information and experience sharing.

The g7+ WTO Accessions Group is a sub-group of the larger g7+ group, which is an association of 20 fragile and conflict-affected states. Its motto is “Nothing about us without us" and it was formed in 2010 in response to the gaps identified by conflict-affected states in the achievement of Millennium Development Goals (MDGs). Advancing to the next development stage in order to forge pathways out of fragility and conflict, and enabling peer learning on how to achieve resilience and support between member countries are its main objectives.  Other members of the g7+ group, which are all original WTO members, include: Burundi, Central African Republic, Chad, Cote d'Ivoire, Democratic Republic of Congo, Guinea, Guinea-Bissau, Haiti, Papua New Guinea, Sierra Leone, Solomon Islands and Togo. Currently, Sierra Leone is the chair of the group.

In her keynote remarks, Ms Malcorra said: "The WTO is probably the most democratic institution within the United Nations architecture. It is an institution that belongs to all of us and where all of us define rules and the way we want to work together in the international trade arena. Your decision to access or to apply for accession to the WTO proves that, as much as the system is perfectible, it is worth being part of it. It also proves that the future of the system is going to be bigger, broader, and even more democratic. It means that you clearly understand that this opportunity around trade will make a difference for your people," she added.

WTO Deputy Director-General Alan Wolff moderated the session. He said that "conflict or post-conflict status is not the usual topic for WTO members, not even at Ministerial Conferences. However, the pursuit by these countries of WTO membership, despite the challenges, reminds us of the critical contribution that the multilateral trading system can make to the peace and stability of nations. The commitment shown by the g7+ countries to WTO accession reconfirms the attraction and strength of the system whose principles and values continue to serve as a suitable foundation for national economies, regardless of level of development, policy orientation or size."

Mr Humayoon Rasaw, Minister of Commerce and Industries of Afghanistan, underlined that "the purpose of establishing the g7+ WTO Accessions Group is not seeking to launch new negotiations or to replace existing groups or committees". Rather, "it aims at better structuring and strengthening our work to facilitate the integration of post-conflict and fragile economies into the multilateral trading system through WTO accessions and to support the efforts of WTO governments, including through information and experience sharing," he said.

Speaking about the challenges that arise after WTO accession, Mr Axel Addy, Minister of Commerce and Industry of Liberia, stressed that technical support coordination and experience sharing are crucial elements of the accession process, especially in the first stages: "If you think that accession is difficult, post-accession implementation is just as difficult. The lesson we have learned and can share with others is that you have to be open to learn and reach out for help. There is a lot of goodwill out there that is willing to help us. Even after accession, member states continue to lend us their technical expertise, including members of the LDC group. Having access to this network to navigate the accession process is very critical," he said.

The Group adopted a ministerial declaration in which it called upon WTO membership and development partners to continue and strengthen technical assistance and support for the trade capacity building efforts of fragile and conflict affected states, during WTO accession and post-accession. The Group also urged the WTO membership to positively consider the request of South Sudan for WTO accession which had been submitted for consideration by the 11th WTO Ministerial Conference. 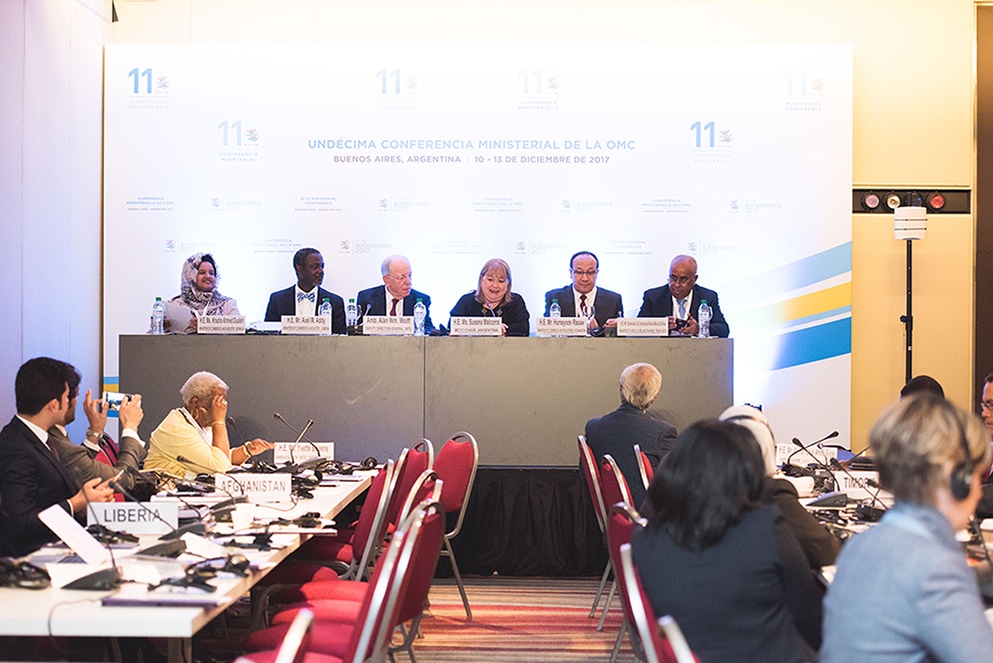