"All journeys, short or long, start by a mere single step," said Aggrey Tisa Sabuni, Chief Negotiator and Presidential Advisor on Economic Affairs, who led a 13-person delegation in Geneva. The delegation also included senior officials from the Ministry of Trade, Industry and East African Community (EAC) Affairs, the Ministry of Petroleum, the Ministry of Agriculture and Food Security and the Bank of South Sudan as well as a member of the Legislative Assembly.

Mr Sabuni said that Juba "stands committed to undertake the required reforms for WTO accession in accordance with the principles of the rule of law, transparency, good governance and respect for human rights." Referring to the ongoing implementation of the Revitalized Peace Agreement signed in September 2018, he added: "Words are not enough. The real question is whether the leadership have the leverage to do things differently." It is this context that "draws us to multilateral institutions such as the World Trade Organization for guidance and inspiration. It is through institutions such as the WTO that we can prove our commitment to reforms at all costs," he added.

Mr Sabuni stressed that apart from oil, which currently accounts for nearly 90% of budget revenues, 60% of its GDP and 95% of exports, South Sudan does not export many products. However, studies have shown that South Sudan has significant potential in agriculture, mining, fisheries, forestry and tourism.

"Accordingly, we believe opening up to the rest of the world is critical to attracting foreign investment, which is needed to develop and realize South Sudan’s potential in other sectors, including jump-starting an industrial and manufacturing sector, not only to diversify the country’s export basket but also to generate high productivity employment for our people, who are mostly young," he said. See his full statement here.

The world's youngest nation, South Sudan, gained independence on 11 July 2011 and first submitted its application for observer status in the WTO in April 2012. The process then stalled as the country descended into civil war. On 5 December 2017, the government submitted a request for WTO accession which received unanimous support at the 11th WTO Ministerial Conference (MC11) in Buenos Aires on 13 December 2017.

The Working Party Chair, Ambassador Mohammad Qurban Haqjo of Afghanistan, commended the strong determination shown by the government of South Sudan, which submitted a Memorandum on the Foreign Trade Regimen (MFTR) in December 2018. "This is an impressive achievement, since on average it has taken seven years to prepare the MFTR for the nine accessions of least-developed countries completed to date. This is also the record for all ongoing accessions – which on average have taken nine and a half years to submit the MFTR and to hold the first meeting of the Working Party," Ambassador Haqjo said.

WTO members voiced support for South Sudan's integration into the rules-based multilateral trading system and began examining the country's foreign trade regime and regulatory framework. They acknowledged the efforts undertaken by South Sudan over a short period of time and encouraged its representatives to remain on track by commencing work on its market access offers on goods and services and keeping members up to date on all ongoing legislative developments.

South Sudan is a member of the EAC, which it joined in October 2016. The delegation also took part in the third Trade Policy Review of the EAC (Burundi, Kenya, Rwanda, Tanzania and Uganda) on 20 and 22 March.

The meeting of the Working Party was followed by a panel discussion moderated by Ambassador Haqjo under the title "Trade for Peace through the WTO Accession Process: Opportunities for South Sudan". The panelists were: WTO Deputy Director-General Alan Wolff; Mr Sabuni; Amb. Kadra Ahmed Hassan, Permanent Representative of Djibouti to the WTO; Amb. Zorica Maric Djordjevic, former Permanent Representative of Montenegro to the WTO; and Mr Daniel Weston, General Counsel and Global Head of Corporate Affairs and Creating Shared Value, Nestle Nespresso SA. The discussion touched on how peacebuilding in the country can have an impact on neighboring countries, particularly in the Horn of Africa. The role of the private sector in supporting WTO accession and the peacebuilding processes was also discussed.

Deputy Director-General Alan Wolff made opening remarks at the panel discussion, underlining that the organization will do its part to help WTO acceding governments like South Sudan as well as members use trade as a tool for building and sustaining peace.

Mr Wolff said that the "Trade for Peace through WTO Accession" initiative, which started with the establishment of the g7+ WTO Accessions Group at MC11, "has brought the trade community closer to the peace community in recent months. I am proud to say that we, at the WTO, are doing something different."

Mr Sabuni said: "South Sudan is blessed with many natural resources, mostly untapped due to years of instability and conflict, lack of clear rules, predictability and transparency, that investors attach great importance to. Joining the EAC and now seeking membership in the WTO is our way of telling the world that we are committed to undertaking necessary reforms that will allow us to attract foreign direct investment into the various sectors of the economy. We believe membership in the WTO will give us the opportunity to create a new virtuous cycle, i.e. increasing the inflow of investment will jump-start and increase productivity across all sectors of the economy. This way South Sudan can trade more, and its economy is set to grow, guaranteeing its citizens high productivity jobs that can allow them to accumulate wealth and rid themselves of poverty. It is only then that the South Sudanese will constructively contribute to the development of our country without resorting to armed confrontations." See his full statement here.

Amb. Hassan stated that peace in South Sudan creates economic opportunities for the entire region of the Horn of Africa where several peace agreements have recently been signed, especially now that the Agreement on the African Continental Free Trade Area is about to come into force. Amb. Maric Djordjevic highlighted four factors that make a compelling case for how WTO accession presents opportunities for peacebuilding in South Sudan. She stated that WTO accession: 1) contributes to durable peace; 2) is an instrument for better resource mobilization, budget allocation and expenditure management; 3) is a promising framework for reducing the risk factors in countries with high dependence on natural resources; and 4) is an instrument for rebranding a country’s image.

Mr Weston highlighted the potential of the coffee sector in South Sudan where Nespresso has operated since 2011 to help rebuild the nation's coffee industry that was destroyed by conflict. He stated that the breed of coffee from South Sudan is unique globally, being wild coffee that grows naturally. It has huge commercial viability, having sold out in a record time of "six days" when Soluja ti South Sudan coffee capsules were introduced into the French market, Nespresso's biggest market. Nespresso hopes to restart its coffee operations soon following the signing of the Revitalized Peace Agreement of September 2018. 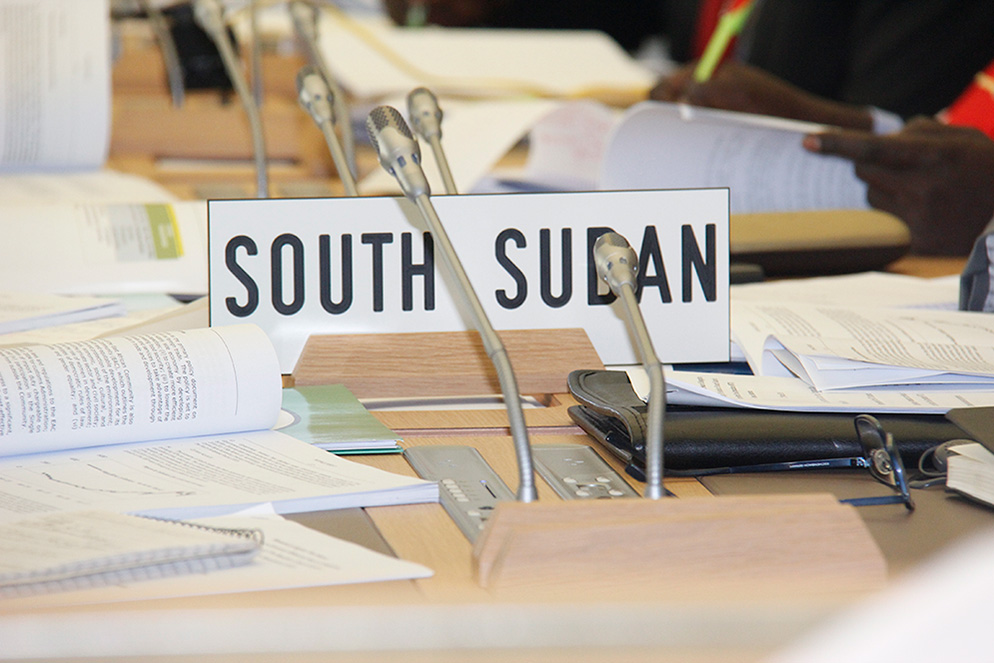