The meeting, chaired by Ambassador Kemal Madenoğlu of Turkey, was the fifth since the Working Party meetings resumed in January 2017. First Deputy Prime-Minister Alexander Turchin led a 40-strong delegation to Geneva, including the Ministers of Economy, Finance, and Anti-Monopoly Regulation and Trade; the Deputy Ministers of Foreign Affairs, Agriculture and Food, Health, and Information; the Deputy Chairman of the Board of the National Bank; and senior representatives of other government bodies.

"I would like to reconfirm our strong intention to complete the accession negotiations by the 12th WTO Ministerial Conference (MC12)," said Mr. Turchin in his opening remarks,  stressing the progress made since the last Working Party meeting in February 2019 to update the draft Working Party Report (the final document passed on to the General Council or the Ministerial Conference for approval, covering the applicant country’s commitments on market liberalization and on applying WTO rules). "Upon the request of a number of WTO members, Belarus has indicated its readiness to agree on more than 70% of the commitments contain[ed] in the draft Report. I believe that such a step would be considered as confirmation of the seriousness of our intention to become a WTO member," he added.

Ambassador Madenoğlu commended the "impressive Belarusian delegation" sent to Geneva to lend further impetus to the accession negotiations: "The direct engagement of so many senior government figures signals that we are no longer in a 'business as usual' mode. It is also a clear sign that the government of Belarus is planning to push forward with the domestic reform agenda needed for achieving WTO conformity. The MC12 objective is no doubt ambitious, but it is evident that Belarus is fully mobilized and engaged, including through the direct involvement of the policy-makers. I hope that members are equally ready for such engagement, which would help Belarus take the necessary policy decisions in the coming months."

The Working Party chair stressed that since the last meeting "Belarus has proactively engaged with members to address outstanding issues in different formats - to advance bilateral market access negotiations and discussions on agriculture domestic support, but also to develop specific texts for the draft Report of the Working Party." He called on members to sustain and, if possible, intensify this high level of engagement in the coming months. "If the MC12 target is to be met, now is the time for the Working Party to accelerate the pace of work, with a view to wrapping-up all remaining issues before the end of this year or by the first quarter of 2020, at the latest. This would leave sufficient time for technical verification of the draft package of accession documents," he added.

Mr. Turchin highlighted that Belarus is actively working on improving its investment regime, pricing policies, procedures for importation and exportation of certain products, protection of clinical research data, and anti-monopoly regulation. In addition, substantive changes are expected in the area of currency regulation and on custom legislation amendments in order to fully implement the WTO Trade Facilitation Agreement (TFA).

Many members noted that the finalization of Belarus' accession negotiations could be one of the significant outcomes of MC12. Some members stressed, however, that progress will still need to be registered and that important substantive issues need to be addressed to meet such an ambitious target. Noting that the negotiation should be driven by substance rather than by process, some of these members indicated that Belarus' appetite for trade liberalizing reforms, such as implementing market-oriented policies, increasing transparency and public participation, and offering new commercially meaningful market access, appeared limited. They asked Belarus for further clarifications on virtually all areas covered in the draft Working Party Report.

Discussions helped to identify and focus on areas of the text which will require further detailed work, said the chair, who invited members to submit in writing comments, questions and drafting suggestions to the Secretariat to keep moving forward. The Working Party also dedicated time to discussing specific commitment language.

Belarus submitted a comprehensive revision of its Legislation Action Plan providing clarity on legislative actions Minsk intends to take to ensure WTO conformity within timeframes consistent with its accession aspiration. It also presented 15 additional pieces of legislation for the Working Party to review. The Chair indicated that identified gaps in legislation need to be addressed to bring the trade regime in compliance with WTO rules and invited Belarus to find a way to implement the action plan effectively given the tight time schedule.

Ambassador Madenoğlu said that the timing of the next Working Party meeting will depend on the availability of the required inputs and on progress on the market access front. A specific date will emerge in consultation with delegations and the Secretariat once the new inputs are circulated. "Nonetheless, given the acceleration in the pace of our work, and keeping in mind Belarus' stated objective to conclude accession at MC12, I expect that the next meeting would take place before the end of the year," the chair said. 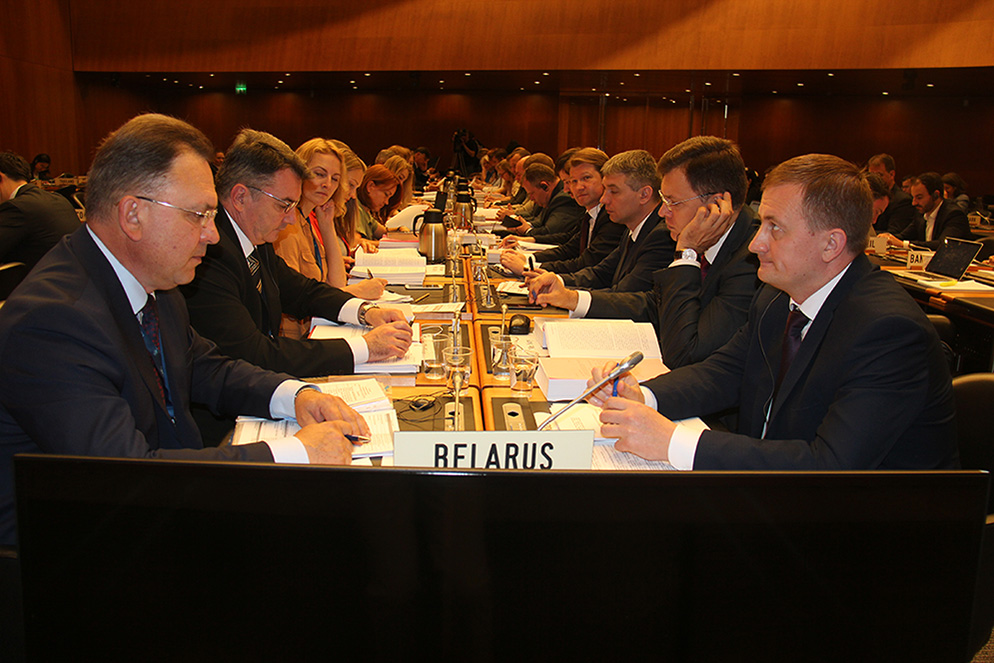