While the expansion of GVCs has generally slowed since the financial crisis of 2008-09, the most recent data shows that complex value chains involving production processes across multiple economies grew faster than GDP in 2017, according to the Global Value Chain Development Report 2019 co-published by the WTO, the World Bank Group, OECD, the Institute of Developing Economies (IDE-JETRO), the Research Center of Global Value Chains of the University of International Business and Economics (UIBE), and the China Development Research Foundation. Findings from the report were discussed on 13 April at a special event during the 2019 Spring Meetings of the IMF and World Bank Group.

The report looks at the impact of GVCs on labour markets, finding that trade has not been a significant contributor to declines in manufacturing jobs in advanced economies and that it has enhanced employment and income in developing economies. It also points to job gains in the services sector in both developed and developing economies as production processes have evolved under GVCs. The report nevertheless recognizes that the structural changes in economies can vary considerably across regions and individuals with different skill levels, particularly in developed countries. It therefore highlights the need for governments to implement adjustment policies to make sure economic gains are spread more evenly.

The report examines the impact of technological progress on GVCs, finding that digital technologies can help to increase the participation of small and medium-sized enterprises in GVCs by bridging distances and reducing trade costs. As for the length of supply chains, the report notes the impact of new technologies remains uncertain as innovations could either encourage reshoring of manufacturing production closer to consumers or strengthen the diffusion of production lines by continuing to reduce assembly costs.

"Global value chains continue to evolve and play a critical role in global trade. This report improves our understanding of their evolution and the role they play in labour markets in developed and developing countries. GVCs provide new opportunities for countries, sectors and firms to participate in global trade, while also being a potentially disruptive force. Designing domestic policies to enhance the substantial benefits of GVC participation while addressing potential adjustment costs will help ensure trade and GVCs generate inclusive growth that benefits all," Robert Koopman, WTO Chief Economist, said.

"Global value chains are critical to poverty reduction because they influence where jobs go, who gets them, and what types of jobs they are. To take full advantage of opportunities emerging from GVCs, governments need to enhance connectivity by investing in infrastructure and digital technologies and opening to trade and investment," Caroline Freund, World Bank Group Director of Trade, Regional Integration and Investment Climate, said.

"GVCs have been important drivers of the global economy over the last two decades but their contribution has begun to slow. The on-going digital transformation provides significant scope to boost global growth, and indeed trade, especially for SMEs, but there are risks, especially when coupled with automation, that this may work to reduce the ability for other developing economies to benefit from integration in GVCs. This need not be the case, as our report shows, but ensuring this, and indeed ensuring that we can make trade work for the many and not just the few, in developed and developing economies,  requires that we continue to develop sound evidence for sound policy making," said Nadim Ahmad, Head of the OECD’s Trade and Competitiveness Statistics Division.

Governments would do well to develop a comprehensive digital strategy to maximize the gains from GVCs, the report states, recommending a holistic approach of investing in information and communication technology and in training along with undertaking measures to improve trade openness, the business environment and innovation. The report further cautions policymakers against local content requirements that seek to increase domestic inputs into exports and calls for further work in improving research and data collection on GVCs. 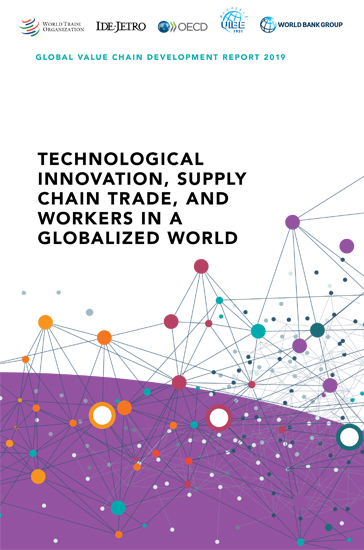