The meeting took place in hybrid form, with the delegation of the Comoros joining from the capital, Moroni, and the Working Party Chair, Ambassador Luis Enrique Chávez Basagoitia of Peru, linking from Lima. Mr Houmed M'Saidié, Minister of Economy, Investment and Energy of the Comoros, and WTO chief negotiator, led the high-level delegation, which also included Mr Djounaid Soilihi, State Secretary for the Civil Service.

Minister M'Saidié recalled the willingness of the Comoros to swiftly complete the accession negotiations. Following the elections held in January this year, the Comoros Parliament will “continue to pursue the legislative agenda, in line with the commitments made,” Mr M'Saidié said. “We hope that with the results presented here and the commitments made, we can look forward to the early conclusion of the formal accession negotiations to the WTO at the next Ministerial Conference. This fifth meeting of the Working Party is an important step towards this ultimate goal,” he added. His full statement is available here.

The Working Party Chair noted: “The accession of the Comoros remains one of the most advanced dossiers. However, much remains to be done before the Comoros can cross the finishing line. … It is my hope that today's meeting will reset the engine of these accession negotiations and put the process on track for completion in the near future.”

Deputy Director-General Alan Wolff commended the work done so far by the Comoros in order to move its accession negotiations to a relatively advanced stage. “I'm particularly happy to see that the Working Party is meeting again after two and a half years. I hope that today's meeting will inject fresh energy and mark the beginning of another very active phase, which will ultimately lead to the conclusion of the accession process,” he said.

Ambassador Chávez Basagoitia stressed the importance of domestic reforms and related legislative developments. Members welcomed the efforts of the Government of the Comoros to enact relevant legislation, in particular with regard to the implementation of the new Customs Code, but noted that an important effort remains to be made on that front. The Chair called on the Comoros to provide a revised Legislative Action Plan and to prioritize the adoption of accession-related legislation. WTO-related draft laws should also be presented where appropriate, he noted.

Noting the encouraging progress achieved in this area, the Chair invited members and the Comoros to continue to nurture their dialogue, both in Geneva and between capitals, so that the remaining bilateral negotiations can be concluded as soon as possible. “The sooner this happens, the sooner the Secretariat can begin to consolidate all agreements reached to produce draft schedules on goods and services,” said Ambassador Chávez Basagoitia.

Members who have questions or comments should submit them in writing to the WTO Secretariat by 12 October. As soon as the Comoros has provided written responses, a new set of questions and answers will be formally circulated to members, as a consolidated document, for consideration at the next meeting of the Working Party. The Secretariat will prepare a revised draft report of the Working Party on the basis of the new set of contributions presented by Moroni.

At the bilateral level, the Chair urged delegations to conclude the remaining bilateral negotiations by the end of the year. He also stressed the critical importance of technical assistance, particularly in areas where the Comoros would need transitional arrangements as indicated in the action plans.

The date of the sixth meeting of the Working Party was left open. “The presentation of technical contributions will be the driving force of the process. We would also need to see substantial progress on the legislative front and other positive developments in the bilateral market access negotiations. … I hope that concrete progress can be made by the end of the year. This will allow us to look forward to the next meeting of the Working Group in early 2021,” said the Chair.

The Comoros is a least-developed country in the Indian Ocean, with a population of approximately 870,000. The Government of the Union of the Comoros applied for accession to the WTO in February 2007, and the Working Party was established in October 2007. In October 2013, the country submitted its Memorandum on the Foreign Trade Regime. The first meeting of the Working Party on the Accession of the Union of the Comoros was held on 2 December 2016. 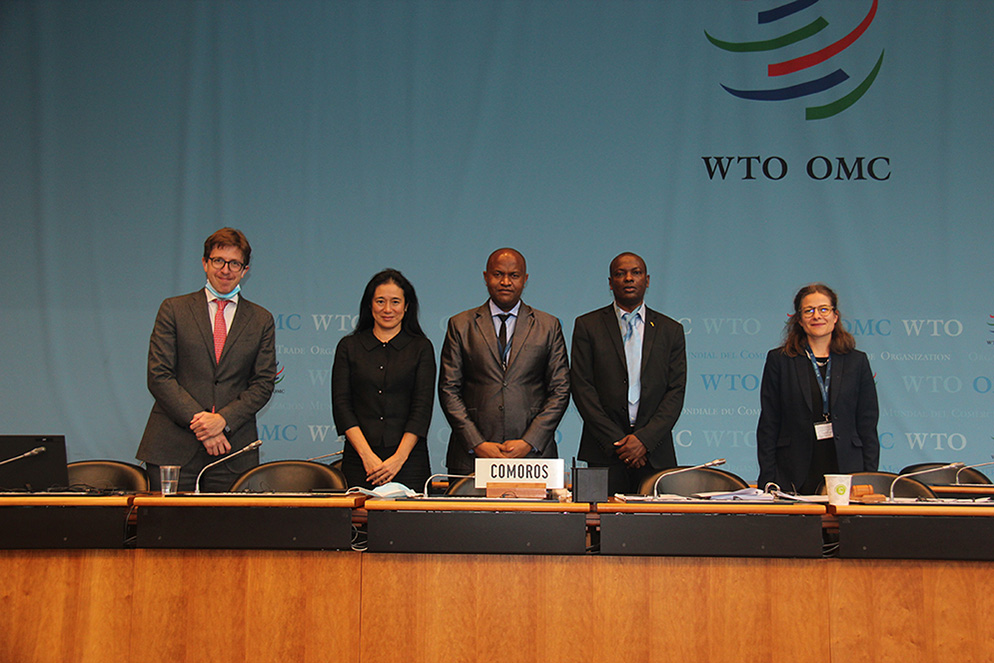