Ambassador Ji-Ah Paik of the Republic of Korea, chair of the working party, highlighted the critical importance of this meeting which “sends a clear message that Uzbekistan is back” and clearly indicates that WTO accession is integral to Uzbekistan's economic reform and modernization agenda. “As a key player in Central Asia, Uzbekistan's commitment to joining the WTO highlights the importance that Central Asia attaches to the multilateral trading system, as the WTO membership prepares for the 12th Ministerial Conference in Kazakhstan in 2021,” she added.

Mr Sardor Umurzakov, Deputy Prime Minister and Minister of Investments and Foreign Trade of Uzbekistan, underscored the government's commitment to the accession process. He said that accession to the WTO is “an absolute priority” for his government and an integral part of the ongoing reforms aimed at further integration of Uzbekistan into the world economic community and the multilateral trading system. “In turn, we are committed to continuing the measures aimed at liberalizing trade, modernizing all trade and political instruments based on the principles and rules of the WTO agreements, encouraging foreign investments and introducing international best practices in the interests of further sustainable economic development of Uzbekistan,” he said.

WTO Deputy Director-General Alan Wolff commended the effort and dedication shown by the government to advance this process. “This is an important day for Uzbekistan and for the WTO. Congratulations. No one better appreciates the value of being part of the WTO than acceding governments. Uzbekistan's return to the accession table after 15 years of reflection is a strong testimony of this appreciation. Please count on the Secretariat for its support to accompany Uzbekistan for the rest of this accession journey. I trust that WTO members and other partners will do their part in supporting Uzbekistan's reforms driven accession,” DDG Wolff added.

While welcoming Uzbekistan's return and its readiness to advance domestic reform efforts through this accession process, WTO members asked Tashkent to provide additional inputs on a range of issues.

The working party reviewed the foreign trade regime of Uzbekistan on the basis of the updated Memorandum on the Foreign Trade Regime (MFTR) and other inputs provided by Tashkent.

Members proceeded section-by-section through the MFTR and provided comments and questions on a wide range of issues pertaining to the country’s trade and trade-related developments.

Uzbekistan updated members on legislative developments in the areas of taxation, currency regulation, investment, competition policy, sanitary and phytosanitary (SPS) measures, technical barriers to trade (TBT), intellectual property (IP) and customs, and reaffirmed its commitment to bring its trade regime into conformity with WTO rules. Tashkent indicated that it continues to work actively to ensure Uzbek laws and regulations are in conformity with WTO rules.

Due to the current pandemic-related restrictions, members and the acceding government could not hold bilateral meetings that usually precede a working party meeting. However, Uzbekistan indicated its readiness to start bilateral market access negotiations, via appropriate virtual platforms, with interested WTO members, on the basis of the latest market access offers on goods and services.  The period from 20 to 31 July is specifically set for this purpose.

The chair of the working party encouraged the delegation of Uzbekistan and WTO members to sustain engagement, and actively follow-up, after the bilateral negotiations period. “These bilateral negotiations are a key pillar of the accession process and need to proceed in tandem with the multilateral track of reviewing the Foreign Trade Regime,” she said.

On the multilateral track, the chair invited members to submit their written questions by 3 August. She requested the WTO Secretariat to prepare a “factual summary of points raised” which would serve as the basis for further examination of Uzbekistan's foreign trade regime by the working party.

Uzbekistan was requested to submit further inputs, such as responses to members' questions, the questionnaires on state trading and on import licensing procedures, draft notification on industrial subsidies as well as agriculture domestic support tables.

Concerning legislation, Uzbekistan was urged to regularly update its Legislative Action Plan and to submit translated copies of the WTO-related legislation in order to allow members to have a precise and comprehensive picture of the status of legislative reforms.

The chair said she would like to hold the next meeting before the end of the year or early next year, depending on the availability of the required inputs and on the progress on the market access front. 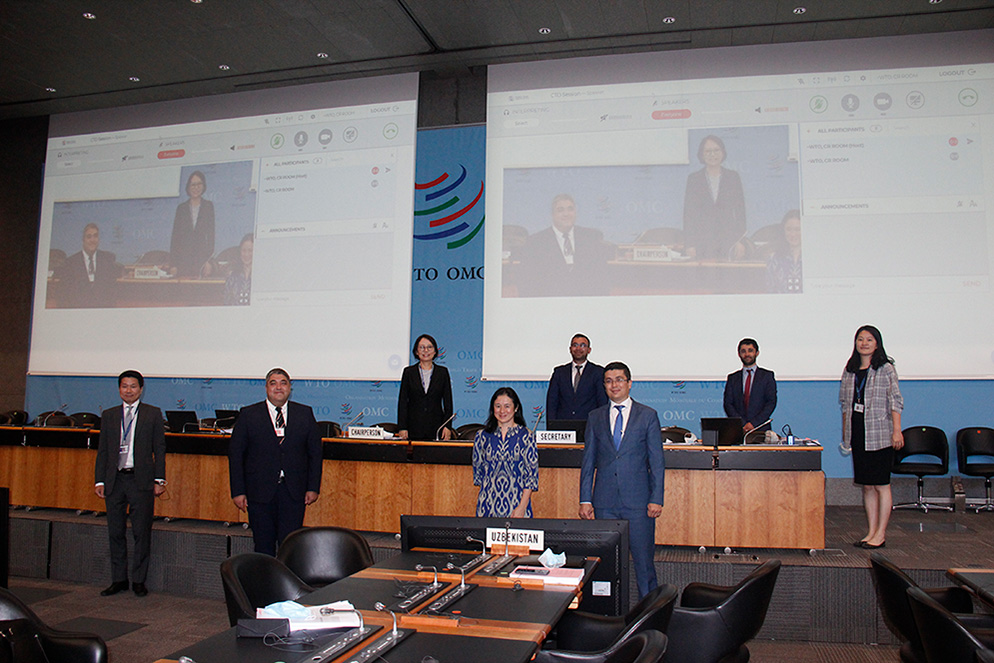