In her meeting with Prime Minister Draghi, Dr Okonjo-Iweala thanked him for the invitation to Rome and they discussed Italy’s economic stimulus package of investment and reforms, how WTO members are addressing the pandemic and the importance of achieving meaningful results by the WTO’s 12th Ministerial Conference (MC12) in December.

Italy holds the current presidency of the G20 group of large economies and the Prime Minister and the Director-General explored how G20 leaders and trade ministers could give momentum to negotiations underway in Geneva. DG Okonjo-Iweala went over the key priorities facing WTO members including the response to COVID-19, the negotiations aimed at scaling back harmful fisheries subsidies and efforts to reform trade in agriculture. Beyond these issues, she explained that members are in serious discussions on making the WTO more inclusive by empowering women and better integrating smaller companies into the global trading system.

The digitalization of the economy is a high priority for Italy and the European Union, so the issue of electronic commerce arose in all of DG Okonjo-Iweala's meetings. Italian officials also engaged the Director-General on the issues of climate change and the environment, particularly how the WTO can contribute to addressing WTO members' concerns on these questions.

With respect to COVID-19, the Director-General said she hoped ministers could agree on a package of measures to reinforce global supply chains for medical products by streamlining customs procedures and cutting back on the number of export restrictions on vaccines, therapeutics and diagnostics. These restrictions have hindered efforts at ramping up vaccine production particularly in the developing world, she said. DG Okonjo-Iweala explained that there was untapped production capacity in developing countries that needs to be employed. They also discussed the ongoing debate in Geneva on the merits of an Indian-South African proposal for temporarily waiving the WTO’s Trade Related Intellectual Property Rights Agreement for medical products — including vaccines — that can be used to combat COVID-19. The Director-General said the fact that the EU is willing to come to the table will give impetus to the negotiations.

The Director-General said WTO members urgently needed to sit at the table and negotiate a pragmatic and effective solution to their differences over the waiver. She also thanked Prime Minister Draghi for inviting her to the Italian-hosted Global Health Summit on 21 May.

On the question of the response to COVID-19, there was agreement that beyond issues of intellectual property many other elements were required for an effective solution. Transfer of technology and know-how, well-functioning supply chains and effective regulatory systems were essential as well.

She met later in the day with Italian business leaders from the B20 and Confindustria, the Italian industry confederation. In a meeting with B20 Chair Emma Marcegaglia, Barbara Beltrame Giacomello, Chair of the B20 Task Force on Trade and Investment, and Francesca Mariotti, Director-General of Confindustria, the Director-General heard about the B20’s priorities including “a new paradigm for sustainable growth” which focuses on “people, planet and prosperity”. They said there is also strong B20 support for women’s empowerment, for action on climate change and for open trade and investment policies to jump start the global economy. They supported DG Okonjo-Iweala on the objective of an ambitious outcome for MC12.

While in Rome, the Director-General also met separately with Gilbert Houngbo, President of the International Fund for Agricultural Development, and Director-General Qu Dongyu of the UN Food and Agricultural Organization and discussed joint efforts at enhancing cooperation between the organizations including research and technical assistance on issues related to negotiations on fisheries subsidies and food security. 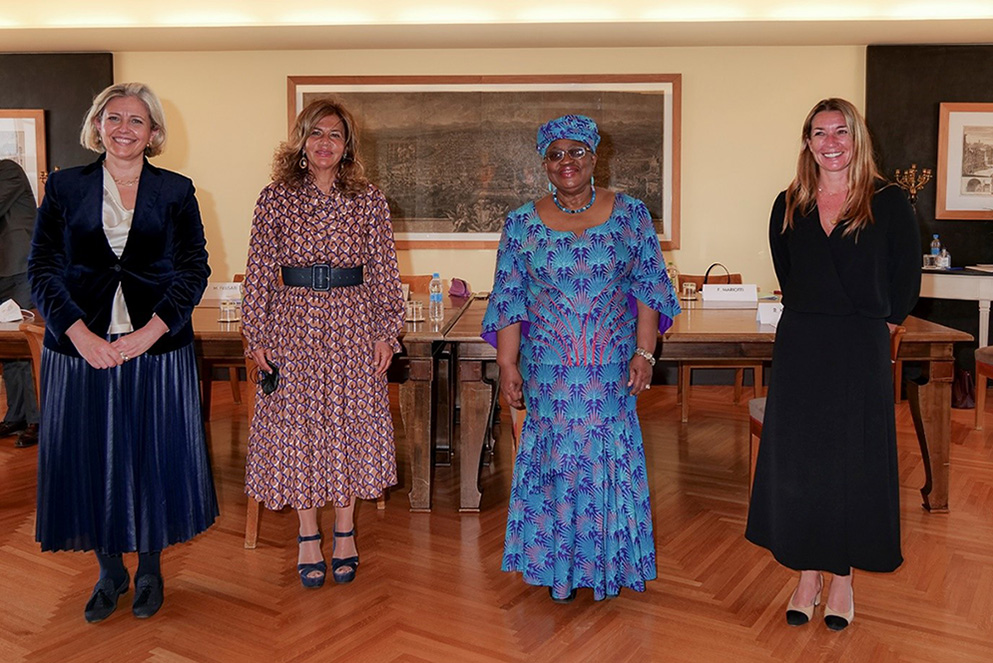